I honestly felt like I was getting somewhere. What started as a half hour time killer messing around with FTL suddenly became a multi hour epic. I managed to outfit my ship with hard-hitting weaponry early in the adventure, dialled up an impressive list of junk and had my ship upgraded way above the curve. I owned an attack drone, but barely had to break it out; I used battles that I would have struggled with in previous attempts as cheeky ways to train my crews piloting and engineering skills. I took on everyone and everything with swagger; scything through sectors and lingering just ahead of the pursuing fleet of intergalactic rebels. I was confident; hell - I was cocky, spending scrap on ship upgrades I didnt really need. My shields had four- count them  four layers. I bought a backup battery I had exactly no need for just because I could. I attended every distress call hoping they were traps so I could blow up the sneaky bastards hoping to ambush me. Everything was sunshine and kittens, all right, and there was nothing that was going to stop me. And then the Lanuis stopped me.

Less than a year ago, the stupid Lanius werent even a thing. Theyre part of the Advanced Addition update that crammed FTL full of new options, like fresh instances, differing weapon sets and the stupid, stupid Lanius. I didnt even need to attack the bastards; when I warped to their location, I had the option to slope off to another system  but, no. I had to be Bertie Big Bollocks. I shot first. A few minutes later, I was screwed. 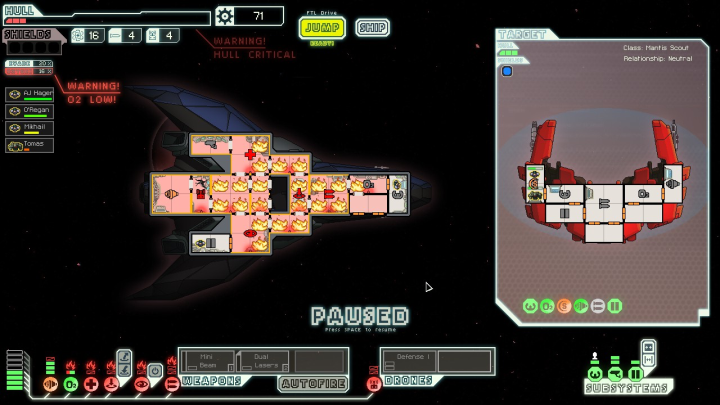 It didnt help that they were armed with missiles that ignored my mega-shield and damaged my ship directly. It helped less that they had a teleporter that deposited two of the hulking lugs aboard my ship to sabotage it from the inside. Especially since my craft was mostly manned by fragile sentient robots who rocked at repairs and tech, but had been seemly constructed with tissue paper. I had an anti-intruder drone which had been enough to see off most boarding parties, but he was effortlessly dispatched in an opening melee. So the Lanius casually strolled around the ship, blasting the engine and the oxygen generator out of spite while my crew took turns almost dying then running to the med bay to heal up while some other poor sap got pummelled. Did I mention they had a mind control device? Oh. They also had a mind control device so, more often than not, a member of my crew was helping them kick the crap out of my craft from the inside or shooting their friends in the face.

I won the battle, but at what cost? My ship was floating debris and my once four-strong crew had been brutally slaughtered down to one. There were holes in my hull, which was a bright side in that they were putting out all the fires, at least. With only one more sector between me and the eighth and final stage, I knew all my work had been undone and that continuing would be futile. But I did anyway; I took another jump into unknown space, warped directly in front of a sodding sun, and shortly after exploded. 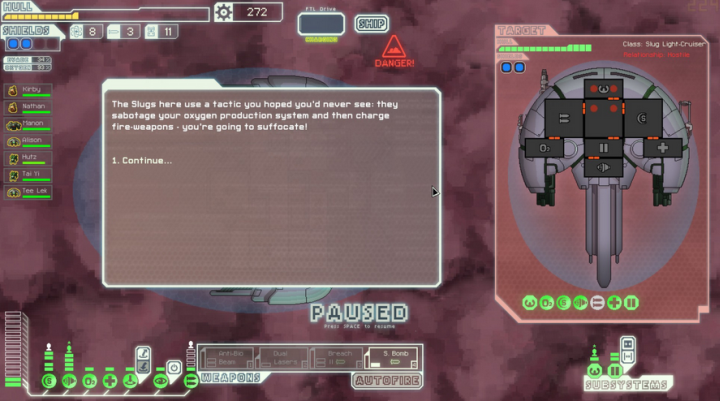 FTL exists only to screw you over. Its a sci-fi rogue-like that has you running from a massive fleet of people who want to kill you through sectors of space filled with people who want to kill you. The mission statement couldnt be simpler; deliver a message to the remnants of you fleet eight systems over, but explore as much of the galaxy as you can for supposed glory. Exploring means finding the means to upgrade your ship or add to your crew. You might come across a slaver craft who will give you a prisoner in exchange for letting them live, or a space station willing to give you new experimental weapons if you protect them from meteors. Or you might dock somewhere and find everyone on board has long gone mad and you lose a crewman to cannibals. Or find that giant spiders have infected the base and are in the middle of slaughtering everyone. Or a bloody Lanius bomber lurking in a nebula.

Mostly though youll be on a resource scrounge. Cant get far without fuel; cant launch missiles without stock or deploy droids without the right parts. Youll be able to scrounge these up by destroying or capturing enemy ships, along with scrap which serves as a cover-all currency. You can use it to buy the bits you need at stores, as well as ship perks, new crew-mates and hull repairs or you can use it to upgrade your craft. Your ship is divided into sub sections that all need to draw power from your generator which is limited in output forcing you to decide on the fly what should take priority. You need hardy shields to soak up damage, but working on the engines will help you avoid incoming attacks. Want more than one weapon on the go? Thats a costly amount of power and upgrades youll probably going to be needing. Oxygen generators can be buffed, cameras can eventually peek in on enemy interiors. You can bolster these further by having them manned by a crewmember. Doesnt matter; youll still probably die. 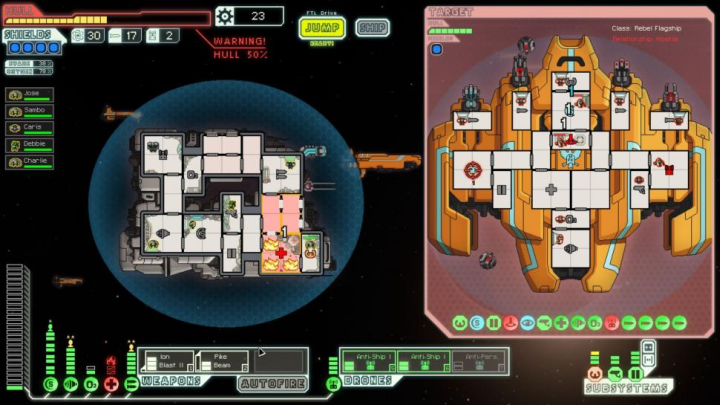 Still hurting from my previous losses, a more aggressive playthough brought me a rapid fire succession of messy deaths before I found my groove and seemed to be on a better path than before. I filed my crew quota up quickly, employing sturdier races that would last more than a few seconds against pesky intruders. A few systems in, I found a fire beam literally floating in space and coupled it to my ship and spent the rest of the game giggling like a madman as I overwhelmed shields and trapped enemy crews between burning rooms. Some I roasted inside their own ship; sometimes, I just made a wall of flame around a broken O2 generator and watched them slowly suffocate whilst I cackled and gloated. Oh, I found me some Lanius; they dont need O2 to survive and their ships can open to the vacuum of space. The flames werent as effective as they had been elsewhere, but they still burn like anyone else. And they did. And all was well.

Then I reached the final sector of space, was set upon by the Rebels flagship and was quickly destroyed. They hacked my mind control system and turned my rockman into a rampaging psycho. They bypassed my shields with missiles and multiple laser banks. If it looked like I was about to gain the upper hand, they cloaked and escaped my weapons lock. Without a target to lock on to, without the chance to overwhelm their shields, the fire could do nothing. I was destroyed. I was beaten. 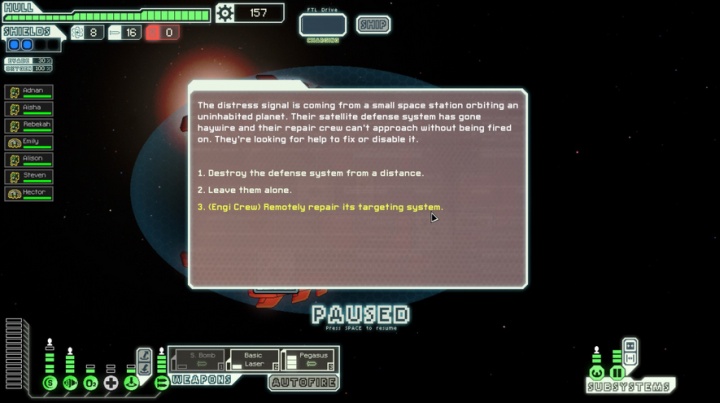 Ive lost count of how many times Ive been destroyed in my quest to find conclusion in FTL. The pirate ambushes, the solar flares, the meteor storms, the alien viruses, running out of resources, running out of systems to hide in, running out of air -- theres always immeasurable odds stacked against you, but you always feel like if you did a few things a little differently or if your luck had held just a little bit more, youd have made it to the finishing line. Youre kidding yourself - FTL exists only to screw you over. But I just cant quit it.

If you enjoyed this FTL: Advanced Edition review, you're encouraged to discuss it with the author and with other members of the site's community. If you don't already have an HonestGamers account, you can sign up for one in a snap. Thank you for reading!

© 1998-2021 HonestGamers
None of the material contained within this site may be reproduced in any conceivable fashion without permission from the author(s) of said material. This site is not sponsored or endorsed by Nintendo, Sega, Sony, Microsoft, or any other such party. FTL: Advanced Edition is a registered trademark of its copyright holder. This site makes no claim to FTL: Advanced Edition, its characters, screenshots, artwork, music, or any intellectual property contained within. Opinions expressed on this site do not necessarily represent the opinion of site staff or sponsors. Staff and freelance reviews are typically written based on time spent with a retail review copy or review key for the game that is provided by its publisher.