[Authors Note: In honor of Duck Hunts completely unexpected inclusion in the new Super Smash Bros. for Wii U, Ive decided to torture you by dredging up one of my earliest reviews from the bad old days. I am so very, very sorry. Enjoy!]

Are you actually reading my review for Duck Hunt?

How can you possibly need a review of this game!? I mean, youve only had thirty [OH, FUCK ME] or so years to play it even if it wasnt packed with your [new lord and master] way back in the 1980s. Come on, it costs 16 cents [$30 complete in the box. If you dont get it in pristine condition, how are you supposed to show it off in your Retrocave and never, ever touch it?] nowadays  there are used game shops for this sort of thing [DAMN YOU, EBAY!] Okay, okay; I suppose you can stick around. Dont worry, Ill think of something halfway interesting to say. Itll be all right . . . really. Would I lie to you?

From the moment that you press down on those aging springs and lock that smooth grey cartridge into the fiendishly designed depths of your Nintendo Entertainment System, youll surely recognize that you are now Playing With Power. Actually theres a pretty good [fucking inevitable] chance that you wont see much of anything except for a blue screen.

HAVE YOU BEEN BLOWING ON THE CARTRIDGE CONTACTS AGAIN?

Thats easy enough to remedy; just dab them with a q-tip liberally doused in rubbing alcohol . . . what? Now you see a blinking blue screen? FINE. Open up your console with a 3.8mm security bit and install a new 72 pin connector. Ill wait. Next melt the 10-NES lockout chip with your trusty curling iron and chuck it in the trash; youre going to greet the dawn of 8-bit gaming as we know it even if it kills you. [A CRT television would also probably be helpful right about now.] 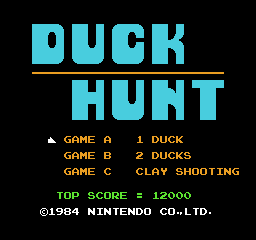 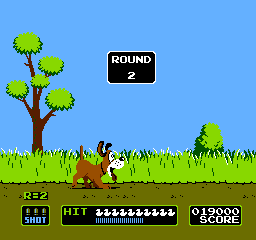 Assuming you can surmount the outlandishly cruel design of the beloved Toaster, youll finally arrive at the title screen for our chosen game. And so . . . ON WITH THE REVIEW!

The hunt begins in a small thicket beneath a clear blue sky, its charm completed by a lone tree and  wonder of wonders  a bush! This never-changing landscapes graphics are ridiculously simple yet ultimately respectable. I mean theyre easily recognizable and it wasnt so long ago [] that we had to interpret exactly what the hell we were looking at in video games, so such basic sprites are nothing to scoff at! Your trusty hound sniffs the ground before plunging into the thicket with a series of barks, flushing out the ducks one at a time or in pairs depending on your selected mode. Just picture it: one of the ducks takes flight, your ears filling with the sound of flapping wings and innocent quacks as it peacefully glides across the screen before . . . 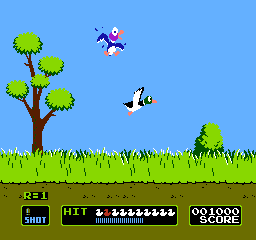 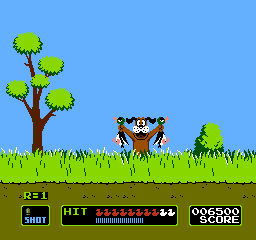 BANG!
. . . being torn asunder by your Zapper! With a shocked expression on its face, the cartoonish fowl tumbles to the ground before landing with a thud, your pooch proudly popping up from the grass with quarry in hand to the accompaniment of a happy ditty.

Just remember this, you trigger-happy lunatic  you have only three shots. Miss them all or let the timer expire and the screen will turn crimson as the formerly doomed bird soars away to sweet, sweet freedom! Allow such an escape to slip through and mans so-called best friend will instead poke out to mock your pathetic ineptness with his annoying chuckle that everyone loves to hate. 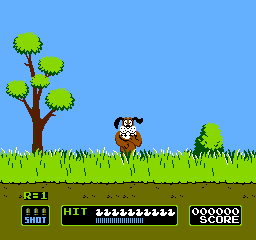 No, you cannot shoot the dog. [RUH ROH, SHAGGY]
Theres surely no one in the entire world who would ever so much as dream of such a thoroughly reprehensible act, but I just thought Id let you know. Of course if you are in fact a sociopath, please proceed to my Chiller review. Freak. [Freak.]

Having pored over my tattered manual while you were away, I must regretfully report that I cant find anything resembling a story within its pages  but its fairly obvious what this game is all about. In short, Duck Hunt is actually a clever allegory for Nintendos miraculous console revolution! The ducks actually represent Atari, who unsuspectingly continue to flap along aimlessly, totally heedless of oncoming disaster before being sent hurtling down to earth by the Crash of 1983, at which point the Big N scoops up the remains of the video game industry by the neck. One might also claim that its a game about hunting ducks, but such a literal interpretation is staggering in its lack of insight.

Ten ducks await similar slaughter in each round; your quota begins at six and gradually rises as you progress to higher rounds, so not only do the ducks become faster as time passes, but youre required to bag an increasingly large number of them. Eventually this requirement rises to all ten, so you cant miss a single one or Cerberus will devour your soul. But wait, theres more! One of your friends can even use a controller to control the ducks flight path and attempt to elude your macabre harvest of death. In reality this feature often translates into filthy, filthy cheating, but its a nice thought. Of course, anyone perceptive enough to figure out the controller trick has surely also noticed that its pretty easy to hit things when youre sitting a half-inch away from the screen [or by just shooting a light bulb], but who would do that? 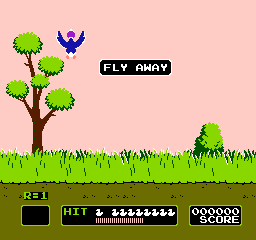 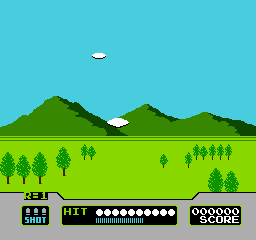 For those of you who just cant bring themselves to callously extinguish the lives of helpless digital critters, you can always stick with the Clay Shoot and merely unleash your unbridled wrath on tiny clay pigeons that practically blast into the horizon, quickly shrinking from view unless you can bring them down with expert speed and timing. This mode is actually considerably harder than the other two, proving that even inanimate objects are craftier than your moronic mallard prey.

Not exactly the most intricate of concepts, Duck Hunt is nonetheless charming in its simplicity, harkening back to a gentler age when all one needed to have fun was a basic workable idea, the execution of that idea, and a healthy dose of heavily sanitized violence. Sure, it gets old pretty quickly, even if the ducks do rapidly increase in speed and their flight patterns become increasingly hectic, but a lot of things get old quickly  this review, for instance.

But lets end this pathetic charade  youve already played this game! Everyone has! Protest all you want, but I refuse to believe that you actually wanted to learn about the wonders of Duck Hunt and have only stayed this long out some sort of horrified fascination. [So I guess some things never change.]

ENOUGH TALK! Dig your old cartridge out of the damn closet or get thineself to the nearest Gamestop! [DAMN YOU, EBAY!!] Even better, write Nintendo a polite but firm letter informing them of your insatiable demand for a superlative sequel complete with glorious cell-shaded polygons, online black phantom drake invasions, and the dogs haunting laughter in thunderous surround sound. Thats right - pass the buckshot, Im ready for Duck Hunt U.

If you enjoyed this Duck Hunt review, you're encouraged to discuss it with the author and with other members of the site's community. If you don't already have an HonestGamers account, you can sign up for one in a snap. Thank you for reading!

© 1998 - 2022 HonestGamers
None of the material contained within this site may be reproduced in any conceivable fashion without permission from the author(s) of said material. This site is not sponsored or endorsed by Nintendo, Sega, Sony, Microsoft, or any other such party. Duck Hunt is a registered trademark of its copyright holder. This site makes no claim to Duck Hunt, its characters, screenshots, artwork, music, or any intellectual property contained within. Opinions expressed on this site do not necessarily represent the opinion of site staff or sponsors. Staff and freelance reviews are typically written based on time spent with a retail review copy or review key for the game that is provided by its publisher.