Up until the arrival of that radioactive and thoroughly Un-American comet, life had been peachy keen for the good, clean youth of this tiny desert hamlet. The weathers warm, our brave fightin boys have come home, and those pesky minorities are still years away from expecting their basic human rights. Sadly this idyllic state of affairs isnt to last  one minute youre sharing a leisurely picnic with that swell gal from the malt shop and the next thing you know ants the size of battleships are descending upon the Earth looking for a little sugar.

THEY CAME FOR DESSERT

Now Im not prejudiced against fangorious mutated ants or anything; I mean, at least theyre not spiders. I have plenty of mutant friends, many of whom are almost as trustworthy as regular people. Unfortunately it turns out that these insectoids intend nothing less than the conquest and subsequent enslavement of the human race, at least until they discover how to manufacture their own Pez. Lacking the ability to construct a hundred-foot magnifying glass, square-jawed scientist Dr. Greg Bradley must first prove the initially reclusive ants existence to the skeptical mayor of Lizard Breath and then keep those big daddies at bay long enough to locate their nest and squash the wicked queen beneath his All-American heel. So basically this is Cinemawares love letter to Them! and the countless rubbery monster flicks it inspired, much like their tributes to Errol Flynn swashbucklery in Defender of the Crown and Rocket Rangers Nazis  IN SPACE! And just like their previous efforts it boils down to a collection of joystick-snapping action sequences framed by a highly atmospheric sim game.

While scouring the map in search of clues, its important to remember that time is of the essence: you only have fifteen days to put a stop to the myrmecological mayhem, the ants become increasingly aggressive with each passing day, and the hours are constantly dwindling away with every minute of real time. Initially the locals just scoff at you, but as conditions deteriorate theyll start spinning tales of unnerving sightings to investigate or even hand over proof like a tape recording of the ants telltale cries. Each day features a predetermined sequence of events that unfold whether youre there to see them or not, so its all up to you which plotlines to follow before Lizard Breath becomes lunch.

Perhaps youll tag along with Bert, the small-town reporter who fancies himself an intrepid dick about to nab the big scoop. (Hes right about the dick part, but not in the way he thinks.) Perhaps youll blow him off and stay home to find disheveled damsel Jackie pounding your door, who leads you to the mangled wreckage of her ride and the incriminating tracks of her typically uninsured attacker. Perhaps youll find yourself driving to the eerily abandoned mines when the local greaser gang tries to run you off the road, forcing you to confront their leader at the drive-in for a switchblade duel. And perhaps youll find yourself all alone in the desolate wastes with only the howling wind and tumbleweed for company, because that particular tip turned out to be a dead end.

But whenever the silence is broken by high-pitched keening youll know that an irradiated insect is about to march into view and masticate your face if you cant quickly pluck off both its antennae with nothing more than a pistol. Unfortunately doing so will unleash the CRIMSON HORDE, an ever-growing army of creeping doom who relentlessly pursue you over the splattered carcasses of their fallen until you either drive enough of them off with makeshift explosives or  OMNOMNOM
While logic clearly dictates that being mauled by a radioactive crawly thing should transform you into a superhero who patriotically pummels communists, instead it merely lands you in the hospital to waste precious days in the care of Nurse Goodbody. That is, unless you decide that filmy hospital gowns arent your thing and mount an escape! Have fun attempting to outrun an even more ferocious swarm of doctors and nurses who clearly spend their off days moonlighting as the Toxic All-Pros defensive line; you were actually better off with the man-eating ants! You can try sneaking in and out of empty beds to shake them off, or snatch a wheelchair to careen about the place like a demented pinball, but since completing this sequence will probably waste actual days, to better save the world I recommend constantly saving your game instead.

Piece together all the evidence and the National Guard provides tanks and tactical airstrikes while you attempt to figure out where these bastards are coming from. Not a moment too soon either, because by now the ants are in full force laying waste to everything in their path as they inch their way ever closer to Main Street. Sadly until the invention of YouTube this is where I would always get stuck and abandon humanity to a fate worse than death. My bad.

It turns out that the nest is a tiny hole out in the middle of nowhere thats only visible for a split second whenever an ant emerges from it. The quickest way to get there is to snatch a plane from the snooty Frenchmans airfield, but then youll have to land it in the middle of the rocky desert without running out of gas or crashing into a cactus. Compared to that it should be childs play to merely navigate a series of twisting tunnels, roasting the endless waves of defenders with a flamethrower until you can plant ten tons of TNT in the egg chamber and then making your way out again while the clock clicks down to doomsday. 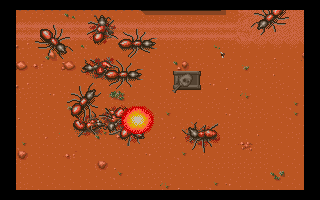 YEAH SCIENCE!
In conclusion It Came from the Desert was another swell Cinemaware game for Amiga owners to lord over their PC-owning friends, and anyone who doesnt agree is either a mindless thrall of the six-legged overlords or some sort of pinko beatnik. Are you a mindless thrall? Probably, but Im afraid I have no time to heroically pummel you. Apparently the nice gentlemen at the door are here to deliver my new couch. Oooh, theres a matching Ottoman!

If you enjoyed this It Came From the Desert review, you're encouraged to discuss it with the author and with other members of the site's community. If you don't already have an HonestGamers account, you can sign up for one in a snap. Thank you for reading!

© 1998 - 2022 HonestGamers
None of the material contained within this site may be reproduced in any conceivable fashion without permission from the author(s) of said material. This site is not sponsored or endorsed by Nintendo, Sega, Sony, Microsoft, or any other such party. It Came From the Desert is a registered trademark of its copyright holder. This site makes no claim to It Came From the Desert, its characters, screenshots, artwork, music, or any intellectual property contained within. Opinions expressed on this site do not necessarily represent the opinion of site staff or sponsors. Staff and freelance reviews are typically written based on time spent with a retail review copy or review key for the game that is provided by its publisher.