Persona 4 Arena developer Arc System Works has a habit of pouring new content into their fighting games and rereleasing them as sequels. This can be a questionable way of doing things sometimes, but it has worked out well here in Persona 4 Arena Ultimax, the update/sequel to 2012's Persona 4 Arena.

Everything you liked about Arena makes a return. The big, gorgeous sprites are more-or-less the same. The trippy aesthetic and soundtrack you've come to expect from Persona games is here in full force, borrowing elements from both Persona 3's Dark Hour and Persona 4's TV World. The action is fast, but easy to follow once you've got your hands on the controller. The gameplay basics are simple, with two regular attack buttons and two Persona attack buttons, but there are even more subsystems to learn and master if you feel inclined to do so.


As with any fighting game sequel, the most important change is the addition of new characters. Ultimax brings five or six newcomers, depending on how you want to count them, plus another three as DLC, including Detective Tohru Adachi, the Velvet Room's Margaret, and Marie, who was exclusive to the Golden version of Persona 4. 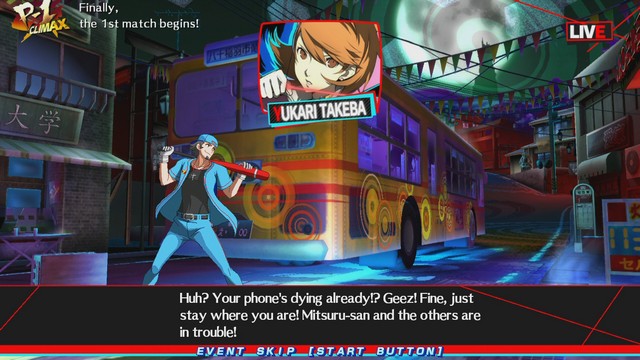 Brand new character Sho Minazuki takes up two slots on the character select screen, each with its own moveset, one with a Persona and one without. Sho is the only new character not to appear in Persona 3 or 4. Sho fights with a pair of swords, and moves quickly and savagely. The Persona-less version is easy for newcomers to pick up and experiment with.

Two noteworthy Persona 3 party members finally appear after being conspicuously absent in the previous game. Both Yukari Takeba and Junpei Iori have aged as much as the rest of the Persona 3 characters. Yukari is now an actress on a Super Sentai-type show, and appears here in her Feather Pink uniform. As always, she fights using her bow and arrow, meaning she focuses on long range attacks. Junpei is now the coach of a little league baseball team, and has traded his long sword for a baseball bat. Almost as though he was conceived as a counter for Yukari, Junpei can deflect projectiles with his bat. Junpei uses a special baseball diamond meter to keep track of hits he lands with his bat. These hits put imaginary players on bases, and after scoring 10 runs, Junpei powers up, becoming faster and stronger. Several of his special moves involve timing bat swings to knock the enemy away and do heavy damage. He's a lot of fun to use.

Two characters are exclusive to the home console version of the game and did not appear in the arcade version: Ken Amada (from Persona 3) and Rise Kujikawa. Ken is unique in that he fights alongside his faithful dog and Persona 3 party member, Koromaru, who has a Persona of his own (Koromaru is wearing the orange Jacket that Ken has grown out of since his last appearance, and it is adorable). Players control Ken directly and give commands to Koromaru using the Persona attack buttons. Teen pop idol Rise was never able to fight in previous games, since her Persona was never very well suited to direct combat and was designed more to offer information and mission support. She's gotten an upgrade here, however, and is ready to get her hands dirty. Rise's animations are comical, fighting by whacking opponents with her microphone stand. Many of her moves look like the types of dance moves you'd expect from a pop star such as her. Even her Awakened attack is a rhythm mini-game. Successfully pressing the correct buttons at the correct times allows it to do maximum damage. 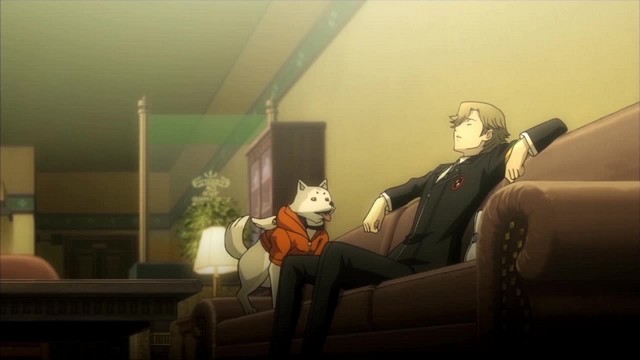 Each newcomer is fun to play as in their own way, and all of them are valuable additions to the roster. Returning characters get brand new moves and tweaks to their old ones to keep them fresh. If that's not enough, most characters have an alternate Shadow form. Aside from looking slightly different and having different intros/outros and voice clips, Shadow characters play somewhat differently. These characters do less damage, but have more health. They gain SP (for super moves) at a faster rate, but can't use Instant Kills. They can't Burst, but once their SP hits 100, they can enter Shadow Frenzy mode. While in this mode, their SP meter constantly drops, but they can use skills and super moves at a greatly reduced cost. Combine this with the fact that they can use Awakened moves without being in the Awakened state (which they lack entirely) and you can see how playing as Shadow characters is a different experience from playing as the originals.

Another new basic gameplay feature is the S-Hold system. By holding the Square button (which can be mashed to automatically perform combos), you can charge a meter that will do a special move when released, from a basic skill all the way to an Instant Kill attack. This is designed to make special moves easier for newcomers to use, but the meter charges slowly and can be interrupted by enemy attacks. You can't do any other attacks while charging the meter, so you basically have to just hop around pointlessly until it's ready to go. It's honestly easier to just do the quarter circle + attack button inputs that people have been doing in fighting games since the 80s. There aren't really any complicated inputs (lots of Hadoukens, but no Shoryukens). Even button mashers will have an easier time ignoring this new system. 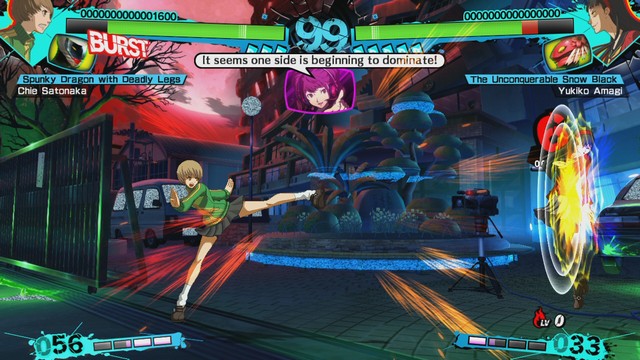 Ultimax tries very hard to be accessible to people who don't play fighting games, and it mostly succeeds. While the S-Hold system fails to make an impact, the auto-combo ability will be enough to carry most people through the Arcade and Story modes on low enough difficulty levels. Some modes actually allow players to let the computer simply take over for them and fight on their behalf so they can focus on the story. Like so many other Arc System Works games, there are tons of mechanics and meters to deal with, such as Bursting, All Out Attacks, status ailments, cancels, Awakenings, Persona Breaks, and more, and while you'll need to master them all the compete at a high level, there's really no need to retain it all to just play casually. The tutorial does a good job of explaining the basics of all of these systems.

Ultimax is essentially an expansion of the first Persona 4 Arena, but it's a big one. There's a new story, which takes place just a couple of days after the story of the previous game. Rather than playing through the same story as each character (which was incredibly dull the first time), there are two story modes, each focusing on the characters of one of the two featured Persona games. You'll play through a few scenes as one character, and then the perspective will shift to a different character and we'll see what they're doing and who they're doing it with. Essentially, Story mode is a mixture of Mortal Kombat 9's linear story with shifting perspectives, and BlazBlue's visual novel-style talking heads. It's still basically a lot of Character X meets Character Y, says something codependent about being able to do anything with friends, fights a clone, repeats, but, at best, it's interesting and, at worst, it's easy to take. The story mode does spoil the stories of Persona 3 and 4, and it closely follows the events of Arena, but Arena's story mode is available as DLC, so you don't have to play the previous game first if you don't want to. Not that the DLC story is really required reading anyway; it wasn't very good the first time.

Another noteworthy new mode is the Golden Arena mode. This mode pits you against a course of 50 or more opponents, each of which will give you EXP when defeated. Leveling up your character increases his or her stats (like the amount of SP gained, or attack power), as well as allowing you to learn new skills that grant abilities such as slowly regenerating health or status ailment immunity. This mode is a fun twist on the basic gameplay and will certainly appeal to RPG fans. You know, like the ones who love the Persona games, for example. 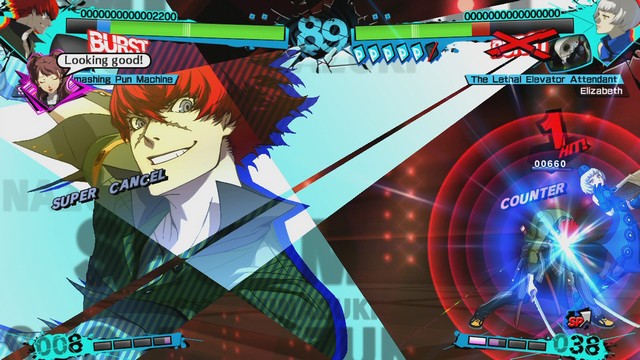 The online mode has received a few tweaks, with the most interesting being the new Lobby mode. You can join rooms full of players and virtual arcade machines, and wander around as a tiny, chibi-fied avatar character, chatting and challenging players to battles. It introduces another social element to online play, and it's very nice. Speaking of playing online, the netcode is great. My experience playing with people in North America and Japan has mostly been smooth, with only a few individual rounds suffering from noticeable lag, even when playing against people with zero bar connections. Allowing the intro scenes to play before each match seems to help keep things smooth. Now, if only we could do something about the overuse of Sho among casual players....

While Ultimax feels more like an expansion of Arena than a whole-new-from-the-ground-up fighting game, it brings tons of new content, touch-ups, and great new characters to the table. If you liked Arena, great, you'll like Ultimax even more. If you've never played the first Arena, that's even better, as this game makes that one obsolete. Old fans and new alike will have a great time with Persona 4 Arena Ultimax, which works well as a love letter to Persona while being a great fighting game on its own merits.
4.5/5

If you enjoyed this Persona 4 Arena Ultimax review, you're encouraged to discuss it with the author and with other members of the site's community. If you don't already have an HonestGamers account, you can sign up for one in a snap. Thank you for reading!

© 1998-2021 HonestGamers
None of the material contained within this site may be reproduced in any conceivable fashion without permission from the author(s) of said material. This site is not sponsored or endorsed by Nintendo, Sega, Sony, Microsoft, or any other such party. Persona 4 Arena Ultimax is a registered trademark of its copyright holder. This site makes no claim to Persona 4 Arena Ultimax, its characters, screenshots, artwork, music, or any intellectual property contained within. Opinions expressed on this site do not necessarily represent the opinion of site staff or sponsors. Staff and freelance reviews are typically written based on time spent with a retail review copy or review key for the game that is provided by its publisher.