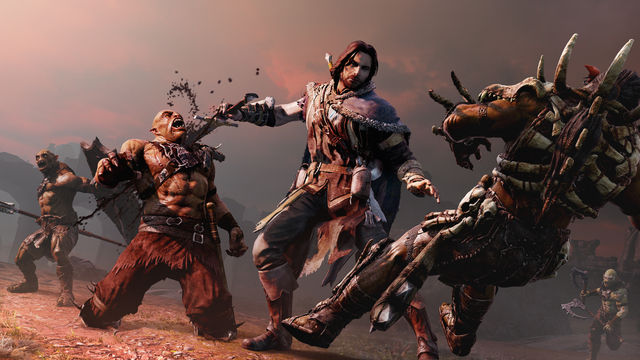 Someone had to improve upon the Assassin's Creed formula at this point, because, after at least one new entry a year since 2009 and no major refinements in mechanics in that time, the Assassin's Creed series isn't about to do that itself. Developer Monolith saw an opportunity and took it, supplementing the framework set by Ubisoft with the more polished mechanics of another popular sandbox series  more on that in a minute  and swathing it in a license that's both familiar to nerds and new to the genre.

That last point is the kicker. Middle-earth: Shadow of Mordor is better than most of the games that it mimics, but it's also got the advantage of being the best interpretation of the Middle-earth saga ever to grace the medium. I've largely grown tired of Tolkienesque fantasy, but there's no substitute for the real thing, and Shadow of Mordor demonstrates that with a perfect mix of established lore, respectful new additions and strict adherence to the unique visual angle that Peter Jackson gave us just over a decade ago. It's a brilliant use of the license that makes a great game even better.

It's set in the period leading up to the events of the Lord of the Rings trilogy, when Barad-dûr has been rebuilt and Sauron is regaining his power. A ranger named Talion is sacrificed alongside his family at the behest of Sauron's servants, but for reasons not immediately clear, Talion returns, now sharing his body with a mysterious wraith who remembers nothing about himself. I don't know how much of Shadow of Mordor's plot is common knowledge, so I won't spoil the wraith's identity, but the two team up, Talion now on a quest for vengeance with newfound ethereal powers while the wraith uses his human vessel to search for clues pertaining to his history.

The game takes place in two separate regions of Mordor, one a gloomy wasteland, one still rather pretty, and both fully navigable via a parkour movement system that clearly channels Assassin's Creed. While that's the most obvious comparison to be made, Monolith also took some obvious cues from the Batman Arkham series in both the stealth and (most prominently) the melee combat, in which Talion uses rapid-fire strikes and occasional quick counters to take on massive hoards of orcs at once. Both of those franchises hit their high points years ago and have been spinning their wheels since, but Shadow of Mordor effectively combines the best of both worlds. 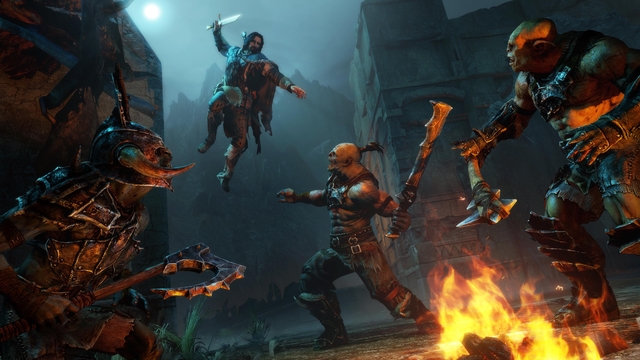 This is most evident when you consider that the Assassin's Creed games have kinda always had terrible stealth mechanics, whereas the stealth in Shadow of Mordor is remarkably functional. The cover system is reliable, and the AI is forgiving without disobeying its own rules. There's a comfortable window of opportunity between getting one enemy's attention and setting off alarms, meaning that stepping into an orc's line of sight doesn't instantly alert every guard in the area to your exact location. Combine that with the open-ended three-dimensionality of the environments, and sneaking about is always a viable option without feeling forced, restrictive or frustrating (barring a couple of isolated instances in which you're asked to avoid detection entirely).

Meanwhile, the hand-to-hand combat is full-on Arkham worship, which feels perfectly serviceable but overly familiar until you begin unlocking Talion's expansive host of wraith abilities. Early in the game, no matter how good you are with the Arkham combat engine (which a lot of action games are borrowing these days), you're just not in a position to take on dozens of orcs at once without getting overwhelmed. Your skill tree, however, genuinely changes how you approach intense situations. You unlock deadly finishers and shorten the number of consecutive hits needed to activate them. You gain the ability to detonate certain objects. You're even eventually granted the power to brainwash orcs and even determine when they launch attacks, meaning you can actually set up ambushes.

And since this is an M-rated game, it's far more deliciously visceral than Arkham ever dared to be.

Even the ranged combat works well, aided by an automatic bullet-time function that makes it possible to fire off a couple of headshots and even the scales at any time. And all of these mechanics combine into this magnificent stew of options that allows Talion to wage large-scale battles from multiple fronts. Hunting down orc captains plays a major role in Shadow of Mordor's campaign, and each has a unique list of strengths and weaknesses. Evaluating those and mastering Talion's abilities to the extent that every problem has a solution is one of the game's greatest pleasures. Shadow of Mordor just gets more fun as it goes.

That's especially true of the game's most unique feature: the nemesis system. All of these captains that you're hunting have randomly-generated names, appearances and attributes, and all belong to a persistent chain of command that's changing even while you're not looking. Taking out a commanding officer removes him from the ladder, being killed by one gets him promoted, and captains will often challenge one another for the respect of their soldiers even when you're not involved. It gives a nice bit of context to what would otherwise just be faceless minions, and it needs to be said that the looks, voices and animations of the orcs perfectly match Peter Jackson's vision of them. 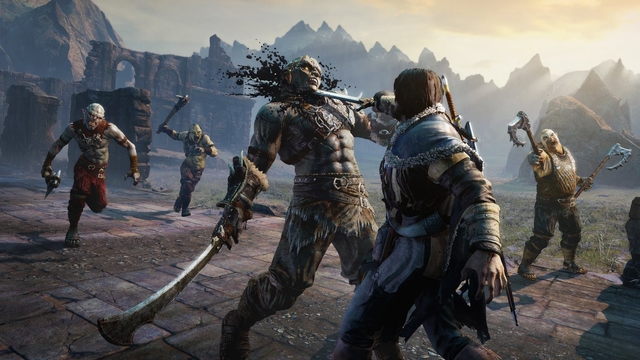 What I find most impressive about the nemesis system, however, is the restraint on Monolith's part when it comes to pacing. Whereas less patient developers would show all of their cards too early, Monolith carefully unveils the workings of this system in a manner that matches Talion's ongoing efforts to challenge Sauron. Early in the game, you have very little influence on Mordor's army  hell, defeating a captain in combat doesn't even guarantee that he's dead. Later, though, you can create gaps in the chain of command, go directly after warchiefs, and eventually even brainwash soldiers into taking orders. One of the game's final objectives is to raise a literal army, which is done by infiltrating the ranks, orchestrating assassinations and ultimately controlling every commanding force of the military. It's a slow but exhilarating rise to power.

As petty as it may sound, my one major complaint with the game is that free-running is done by holding a face button. This means that your right thumb isn't free to control the camera when camera control is most needed, which is probably the source for Talion occasionally bumbling about when there's a specific place that you want him to go. The Assassin's Creed formula may have been improved here, but we still don't have a parkour-centric sandbox game in which the main character always does exactly what you want him to do.

I was also never terribly engaged in the central plot. The implementation of Tolkien lore is expertly handled, and I quite enjoyed a couple of the supporting characters (particularly Ratbag, a wannabe bigwig that none of his fellow orcs take seriously), but Talion himself is a dull protagonist, and ultimately, this is a simple revenge story that just happens to be framed with the richest, most absorbing fictional universe of all time. It feels both padded and incomplete  there's a frustrating mid-campaign detour into a series of hunting missions, and the game concludes with an abrupt cliffhanger, further damaging the ending after the final boss winds up just being an extended quick time event.

But regardless of how exciting Talion's particular story is, this is still, by my mark, the best and most faithful use of the Middle-earth license in the history of the medium, and even if it wasn't, it'd still be the best sandbox game of the year. Instead, it's all that and a far better Lord of the Rings prequel than the Hobbit trilogy is turning out to be. I love it, and I think you will, too.

© 1998-2021 HonestGamers
None of the material contained within this site may be reproduced in any conceivable fashion without permission from the author(s) of said material. This site is not sponsored or endorsed by Nintendo, Sega, Sony, Microsoft, or any other such party. Middle-earth: Shadow of Mordor is a registered trademark of its copyright holder. This site makes no claim to Middle-earth: Shadow of Mordor, its characters, screenshots, artwork, music, or any intellectual property contained within. Opinions expressed on this site do not necessarily represent the opinion of site staff or sponsors. Staff and freelance reviews are typically written based on time spent with a retail review copy or review key for the game that is provided by its publisher.