Danganronpa: Trigger Happy Havoc was released earlier this year, and the sequel is hot on its heels. These two games are ports of PSP games, and were released as a Vita collection in Japan. After playing both games and seeing their similarities, the decision to bundle them in their home country makes perfect sense.

Danganronpa 2 begins more or less the same way its predecessor did. Player character Hajime Hinata has been accepted into the prestigious Hope's Peak Academy, a high school for students who have a special talent that makes them the best of the best at something, whether it be nursing, martial arts, or something shadier, like organized crime. Just as he's about to enter the building, he blacks out, and when he wakes up, he's in a classroom with 15 other students. None of them have any idea how they got there.

These characters are mostly as one-dimensional as the cast of the first game, mostly consisting of one gimmicky personality trait that gets worked to death. These human-shaped trope monsters range from amusing, to acceptable, to annoying. Gundham the breeder is a fun character who seems determined to use his Four Dark Devas of Destruction (which are hamsters) to take over the world. Ibuki is an overly-energetic-but-harmless rocker who seems to practically bounce off the walls whenever she appears. Meanwhile, Hiyoko the prepubescent-looking Japanese dancer is a hateful little girl who gets away with spewing bile because she looks like a 9-year-old, a trope that anime fans will immediately see as played out. Mikan the nurse is insufferable, perpetually nervous and constantly apologizing for things. She's one of those annoying victim characters who is supposed to be clumsy and vulnerable and ends up the target of several shamelessly fanservice-y scenes. She'll trip and fall, landing with her ass up in the air, squealing Oh, I'm so embarrassed, please, don't look at me! while making no effort to actually cover herself up, like she's Janet Jackson at the Super Bowl. It ultimately feels like most of these characters are just there to be potential murder victims or suspects for the few more important characters to deal with. Still, as far as flat characters go, most of them range from likeable to delightful in their absurdity, thanks in no small part to the game's excellent script. This group is perhaps even stronger than the similarly-flat cast of the first game. 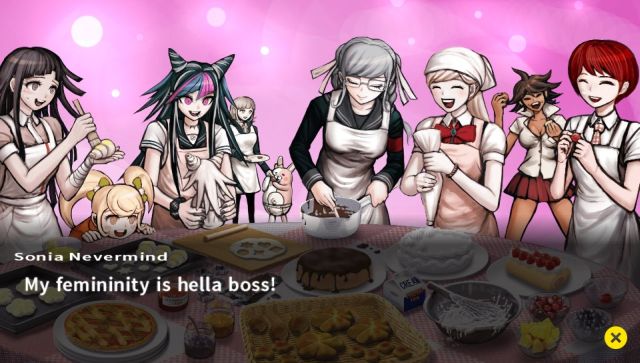 The moment the walls fall away and reveal a tropical island is the moment where things start to differ from the first Danganronpa, but not by much. The kids are told by a bizarre Magical Girl rabbit, named Usami, that they're on a Class Trip, and simply have to live peacefully together for a while, before they'll be taken back to the school to continue their normal lives. When the evil Monokuma shows up, however, things take a predictably bad turn. Their peaceful vacation becomes the Killing School Trip.

The rules are identical to the ones outlined in the first game. The only way for a student to earn his or her freedom is to murder someone, becoming the Blackened. Once a body is discovered, a Class Trial takes place, and the remaining students try their best to suss out the killer's identity. If the Blackened is convicted, they're sentenced to death. However, if the wrong person is convicted, everyone besides the Blackened will die and the Blackened will be free to go.

As such, each chapter of the game is broken into three phases. First comes he Daily Life phase, where students are free to interact with each other and explore the island. Inevitably, someone will die and that prompts the start of the Deadly Life phase. There, you'll have to examine crime scenes, collect evidence, and hear witness accounts, all to prepare for the most exciting phase: the Class Trial. 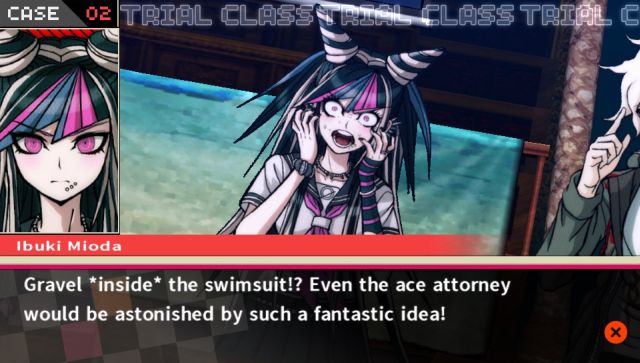 Class Trials play like surreal Ace Attorney trials, with mini-games in the way of standard contradiction-hunting gameplay. The most common mini-game is the Nonstop Debate, during which the students are free to discuss the murder all at once. Phrases fly around the screen until you shoot the correct one with a Truth Bullet (a piece of evidence or witness account) to either prove it false or support it with evidence. Eventually, doubtful White Noise phrases will start appearing during the Nonstop Debates, and will block your shots if you don't take them out with your Silencer.

The Nonstop Debate is a weird-but-fun way to handle what are essentially logic puzzles. The same can't be said for some of the other mini-games, some of which are reworked from the previous installment. One new one is the Rebuttal Showdown, in which one of the other characters will disagree with Hajime, and the two characters will essentially start yelling at each other. Truth Bullets turn to swords, and you'll have to use the touch screen or directional pad to slice away your opponent's words. When you see a phrase you can refute with evidence, you better hope you have the correct Truth Blade selected, because there will be no time to select it once you know which one you actually need. That's a fatal in this particular mini-game.

Other mini-games include the hilariously-misnamed Improved Hangman's Gambit, where you'll have to play a strange game of hangman with exploding letters that move across the screen and inflict damage if they collide. The Logic Dive is brand new, and one of the better mini-games available. Hajime surfs through the inside of a trippy translucent green cylinder, navigating paths to find the correct answers to questions that appear on screen. The remaining games aren't exactly great, but they're easy to tolerate. 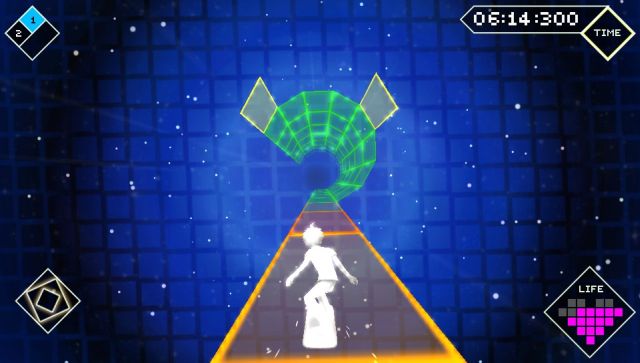 Danganronpa 2, like its prequel, would be better if it did away with the mini-game nonsense and used something more slow-paced and straightforward, like the Ace Attorney trial system. Even the good ones just get in the way of the story, which is good enough to keep people playing, regardless.

Despite the mostly-flat characters, and the rehashed Killing Game setting, Danganronpa 2 has an excellent story to tell. While the characters are unaware of the events of the first game, their situation is closely tied to it, and this game has no problems outright spoiling its prequel's tale. You should definitely play the first game before even thinking about touching this sequel. It introduces Trigger Happy Havoc's late-game themes and plot twists early, which is a good decision, because if you're a veteran of the series, you'll see them coming a mile away. Doing this allows the game to explore these themes and story points in greater detail, adding valuable context to certain events from the first game's ending that were in desperate need of fleshing out. Those events still end up requiring a huge amount of suspension of disbelief, but once you can accept the nonsensical state of the game's world, the twists and turns of the story will have you hooked. 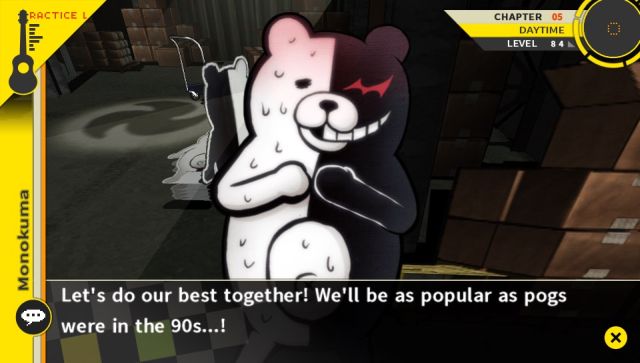 The simplest way to tell whether or not you should play Danganronpa 2 is to ask yourself two questions: did you play Danganronpa: Trigger Happy Havoc? If so, did you like it? Danganronpa 2: Goodbye Despair is very much a part 2 of the Danganronpa story, and while it should still be enjoyable for visual novel fans who have not played the first game, these two games were definitely meant to be played in a specific order. Goodbye Despair is not a good starting point, but returning fans should absolutely give this worthy sequel their attention.

If you enjoyed this Danganronpa 2: Goodbye Despair review, you're encouraged to discuss it with the author and with other members of the site's community. If you don't already have an HonestGamers account, you can sign up for one in a snap. Thank you for reading!

© 1998-2021 HonestGamers
None of the material contained within this site may be reproduced in any conceivable fashion without permission from the author(s) of said material. This site is not sponsored or endorsed by Nintendo, Sega, Sony, Microsoft, or any other such party. Danganronpa 2: Goodbye Despair is a registered trademark of its copyright holder. This site makes no claim to Danganronpa 2: Goodbye Despair, its characters, screenshots, artwork, music, or any intellectual property contained within. Opinions expressed on this site do not necessarily represent the opinion of site staff or sponsors. Staff and freelance reviews are typically written based on time spent with a retail review copy or review key for the game that is provided by its publisher.