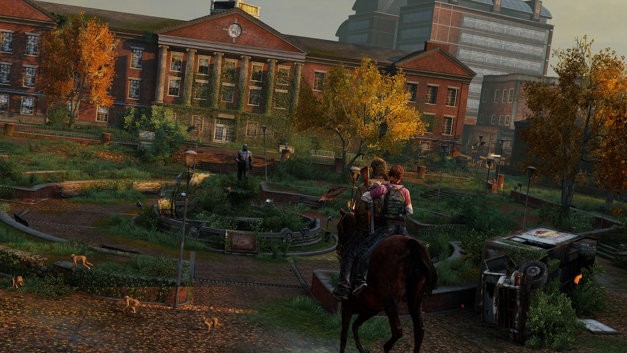 This was my first time playing The Last of Us, and that's a tricky position to be in. Nothing could have lived up to what my colleagues have spent the last year hyping this game up to be, and even with realistic expectations, I can't help but feel that this is a bit of a missed opportunity. What you have heard about The Last of Us's story is accurate. It's daring and adult, and it's presented with a level of groundedness and restraint that I don't believe I've ever seen in this medium. It's one of the most emotionally exhausting video games I've ever played, and yet whenever control is handed back to the player, The Last of Us is safe, predictable and even trite in spots. Were it not for the narrative, The Last of Us would be largely unremarkable.

But let's be honest  that's true of many games that I love, and I kind of love The Last of Us. I don't care how a game engages me, just that it does.

While the game's reissue, non-cryptically titled The Last of Us Remastered, boasts many features that are worth mentioning, the most notable is that the game now runs at 60 frames per second and in 1080p. This is important because The Last of Us is widely regarded as having some of the best character models and motion capture work in the history of video games. Troy Baker (unrecognizable in a Southern growl) and Ashley Johnson play the two leads, and their terrific performances are conveyed exquisitely. I'm told that The Last of Us was the prettiest game of the last generation. I didn't play it, but I can tell you that Remastered puts most actual new-gen games to shame in the visual department, and its story is all the better for it.

That story, as you're probably aware, is a post-apocalyptic one. A new species of the Cordyceps fungus has turned most of the world's population into zombies, and main character Joel lost his daughter in the initial outbreak and panic, though it was at the hands of a non-infected soldier. Two decades later, Joel is understandably not very trusting of authority (what little of it remains, anyway) and working as a smuggler. He stumbles into the task of escorting a teenage girl named Ellie to a safe zone because  and I'm just going to give this away, because it's revealed early and you'd have figured it out anyway  she is immune to the fungus and may hold the key to humanity's salvation and so forth.

Their journey across the country spans four seasons and is somewhat Odyssean; their objective is rarely more complicated than "get to the place," and a wide assortment of colorful characters come and go, all with different motives and endgames. The emotional anchor is the relationship between the two leads and how the constantly varying circumstances  unexpected detours, sudden ambushes, severe injuries, and so forth  force them closer to one another. These are two complicated humans. Ellie has long been without a family, which makes it heartbreaking when the most prominent parent figure in her life regards her, at least initially, as work and nothing more. Meanwhile, as Joel grows more attached to Ellie, the tragic loss of his daughter prompts him to be perhaps more protective than he should be in a world in which only the strong tend to survive.

It's a fascinating dynamic, and it's made beautiful by how gradual it is. Until the last hour or so of this relatively long game, the plot remains simple, depicting the pair's hike from one side of America to the other and their various misadventures along the way. Everything that happens, however, strengthens them on some vital level. The winter segment, in which their journey comes to a relative halt as they deal with harsh conditions and a new threat, could realistically have been cut altogether, and it would have made The Last of Us several hours shorter. But the narrative wouldn't have worked as well had we not seen the sacrifices that Joel and Ellie make for each other in this chapter. The growth of this relationship is believable because it's the culmination of months spent together, adjusting to each other's personalities and developing trust and respect in one another.

Again, Baker and Johnson are absolutely sublime, and video game superstars like Nolan North and Merle Dandridge give even the supporting characters life. But beyond that, the writing and staging are masterfully underplayed, almost discomfitingly so coming from a studio whose entire output thus far has essentially been Saturday morning cartoon material. The Last of Us is a very mature game, not in the sense that its content is inappropriate for kids (though it certainly is), but in that it has no pretentions to being "cool." Flashy set pieces are kept to a minimum, none of the dialog is quotable and the game's most memorable moments tend to involve quiet, tender discussion in calm situations. The commercial success of The Last of Us seems to prove that mainstream gamers no longer need to be treated like testosterone-fueled meatheads. 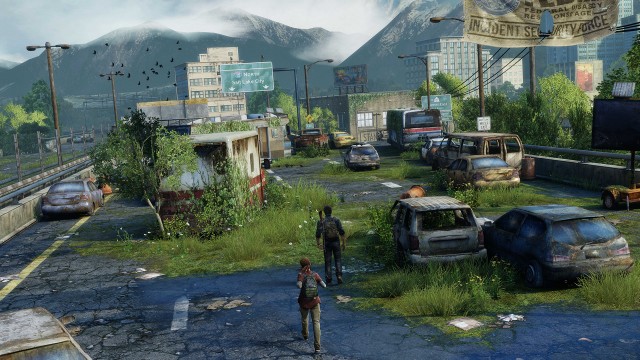 This isn't Uncharted, then, but it still pertains to the same general "third person action" mishmash of cover-based shooting and platforming. The hook of the combat is that no single approach will work all of the time. You've got guns, but ammo is extremely limited (I rarely had more than a few rounds for any one weapon at a time), and Joel isn't a very good shot, anyway. Stealth is an option, but Joel isn't terribly mobile, either, and enemy movement patterns are randomized and unpredictable. Most encounters will force you to silently take out as many guards as possible and then gun down the rest when that plan inevitably goes belly-up. You can use collected materials to fashion improvised equipment like blades and bombs, and resources are so limited that I was often forced to break out of my comfort zone and experiment with new weapons.

It all felt suitably panicked, even during the encounters that don't involve zombies, so the combat can be considered a success for the most part. The game's frequent environmental puzzles don't fare as well, if only because they're so arbitrary and uncreative. There always seems to be a ladder conveniently lying around whenever the pair need to scale a wall, and I lost count of the number of times I was asked to shuttle Ellie (who cannot swim) across a body of water with a pallet that just happened to be floating there. Ellie actually starts commenting about how plentiful floating pallets seem to be in this world, and when the characters in your game are actively mocking its design, that may be your cue to change something.

The real failing of The Last of Us, though, is that it rarely incorporates Ellie as anything more than a plot device. You'd think that a game like this would have an involved escort system comparable to the likes of Resident Evil 4 or Enslaved, but most of the time, Ellie might as well not even be there; she has very little combat presence and she is literally invisible to enemies when you're not actively engaging them. I can see the reasoning  the already limiting combat would become downright tedious if your life was in a wonky AI partner's hands  but it's still just slightly disappointing that the new medium benchmark for cinematics would often have such a jarring disconnect between story and design.

And yet, having said all of that, the story is so natural, so intimate, so utterly convincing that I have a hard time not giving The Last of Us my highest recommendation regardless. The inclusion of the prequel DLC chapter Left Behind in this reissue only further justifies that, as it's every bit as powerful as anything in the main game, if not more so. Anyone who's finished the campaign will already know how this ends, but Naughty Dog so engrossingly captures the smart but playfully innocent coaction between Ellie and her best friend on their last day together that we're still stung by its conclusion. Left Behind further cements the fact that Ellie is the true protagonist of this story, if that's not already made clear by the campaign's ending, wherein Joel does things that will deliberately make most players considerably less sympathetic for him. It's a ballsy finale. Moral ambiguity at the end of the world is a road frequently traveled, but it's rarely this downplayed.

I won't lie: The Last of Us is too slow and too long, particularly when it's so low on fresh mechanics, and I often found myself wishing that Naughty Dog would stop making me prop up the umpteenth garage door with the umpteenth cart and just get to the point. But it's the mark of exceptional storytelling that when I think back on The Last of Us, I don't recall those frustrations. I recall the subtle musical cues, the ominous fungus spores floating across the load screen, the gut-wrenching sounds emitted by the zombies, and the haunting post-apocalyptic cityscapes. I recall the people, the facial expressions, the quips, the confessions and the deaths. The Last of Us is a serviceable game paired with one of the best cinematic stories ever told, and that's more than good enough.

P.S. A nifty and under-marketed feature of the PlayStation 4 is the option to plug headphones directly into the controller itself. I highly recommend that you play The Last of Us Remastered this way. It's got some of the best sound design of any game, to the point that nearly every gunshot made me jump.

If you enjoyed this The Last of Us Remastered review, you're encouraged to discuss it with the author and with other members of the site's community. If you don't already have an HonestGamers account, you can sign up for one in a snap. Thank you for reading!

© 1998 - 2022 HonestGamers
None of the material contained within this site may be reproduced in any conceivable fashion without permission from the author(s) of said material. This site is not sponsored or endorsed by Nintendo, Sega, Sony, Microsoft, or any other such party. The Last of Us Remastered is a registered trademark of its copyright holder. This site makes no claim to The Last of Us Remastered, its characters, screenshots, artwork, music, or any intellectual property contained within. Opinions expressed on this site do not necessarily represent the opinion of site staff or sponsors. Staff and freelance reviews are typically written based on time spent with a retail review copy or review key for the game that is provided by its publisher.