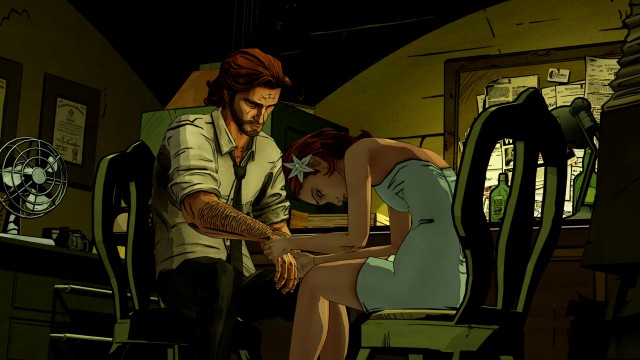 I'd only played one of Telltale's games before this  The Walking Dead  but it had such a lasting impact on me that the developer has pretty much earned a lifetime free pass. Turns out that getting me interested in point-and-click adventure games is a simple matter of creating the only work of fiction ever to make me cry. And while The Wolf Among Us doesn't carry that level of emotional weight (it would be unfair to expect that from any game), it's still a cracking good murder mystery that holds many of the qualities I now associate with Telltale's work.

I'm going to describe the premise of The Wolf Among Us to you and it's going to sound ridiculous. The game is based on a comic series called Fables, the title of which is not a misnomer. Its cast is composed of characters from fairy tales and nursery rhymes who have taken up human identities and relocated to (where else?) New York City. Knowing nothing about the story before I played it, I'd always jumped to the conclusion that the game was about werewolves or something, but no  it is literally about the Big Bad Wolf, who now goes by the name "Bigby," uses magic to take on the appearance of a human (as must everyone, by law) and works as Fabletown's sheriff. He seems genuine about keeping the order, though everyone tends to be somewhat cautious around him given that, y'know, he used to eat people.

Sounds like the stuff of a children's cartoon, right? But no  save for the vibrant colors, The Wolf Among Us entirely conforms to the modern definition of dark-and-gritty, meaning that everyone drinks, smokes and swears up a storm. This means that we essentially get to see Disney characters taking on jarringly adult roles: Beauty and the Beast are having marriage problems; Tweedle Dee and Tweedle Dum are now shotgun-pumping mob henchmen; Georgie Porgie is now a tattooed pimp running a strip club called the "Pudding & Pie"; and so on and so forth. It's revealed early in the game that Fables can sustain far greater wounds than humans can, which leads to a lot of nasty violence, and the central mystery literally revolves around murdered prostitutes. I'm probably not making this game sound very good. 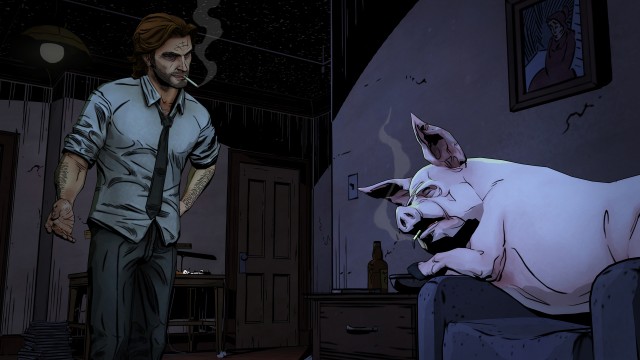 If you're wondering how such an outlandish concept can earn a thumbs up, you need only recall that it's by the same team that brought us The Walking Dead and who clearly have an affinity for sharp writing, engrossing world-building and astute commentary on the necessity and consequences of violence. While those first two qualities are somewhat self-explanatory, it's that last detail that hangs in my mind as I try to convey why The Wolf Among Us, like Telltale's last title, works best as a video game despite being almost entirely story-centric. Although there are few actual "mechanics" here, the implications behind every choice you make have a lasting effect, thanks to powerful writing and staging.

The Walking Dead was about survival in a broken world. When you were given the opportunity to do terrible things, there was always the faint justification that you were doing it for the good of those you care about. The Wolf Among Us, blessed with a considerably less dire setting, takes a different route. Its deals with fanciful caricatures adapting to "real" lives in the "real" world. Its protagonist has been granted a second chance, but he is still, quite literally, a monster. He has savage instincts and is prone to violence. It may be difficult to picture groundedness playing a role in a scenario in which the Big Bad Wolf gets into a bar fight with Grendel, but when Bigby ends the brawl by tearing Grendel's arm off, and Grendel is subsequently missing an arm for the remainder of the game, it stops being silly.

As a gamer, this is an unusual position to be placed in. You're pretty much always given a choice over how excessive Bigby is, but nearly everyone he confronts is villainous and "deserves" it on some level, and let's face it  when a character shoots you in the gut, having an excuse to literally rip his throat out is an opportunity most of us will jump on. And hell, most games glorify that sort of thing. But when Snow White's eyes widen with terror, or when one of the flying monkeys from The Wizard of Oz turns away in disgust, or when Ichabod Crane loudly objects to law enforcement officers partaking in violence under his jurisdiction, it becomes clear that even in such a fantastical setting, behavior like this isn't normal. And there lies the conflict. On one hand, this is awesome. On the other hand, you're kind of a maniac. 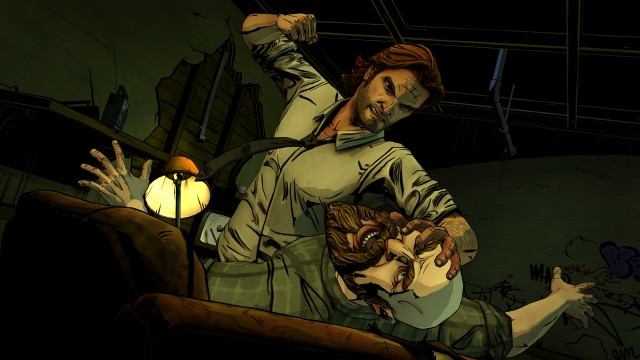 Who's afraid of the Big Bad Wolf? That's up to you. It goes without saying that Bigby fulfills his duties to some degree, but at what cost? It's an interesting focus, and Telltale has rightly realized that allowing players to take part in Bigby's character arc in such a major way is game enough. The Wolf Among Us is impressively unburdened by excess  whereas even The Walking Dead was occasionally bogged down by lapses into arbitrary puzzle-solving, Wolf remains focused and dead set on pushing its narrative forward. Even the quick-time events are smartly relegated only to action scenes, which are infrequent, anyway. If the story's all that we're here for, that might as well be all that you give us.

And at the end of the day, The Wolf Among Us only works because it's got a great story. As a murder mystery, it's got enough red herrings and cliffhangers and maddening cutaways to make me thankful that I waited for the entire season to be released before diving into it. But as twisty as its plot is, Telltale is careful not lean too heavily on One Big Reveal; hell, when the central villain finally explains his/her motives, it's nothing you couldn't have puzzled out already. The juiciness is in the details of this particular universe  those ribbons that people are wearing, the rules regarding these "glamour" spells that give Fables human appearances, the troubles that certain characters are having adapting to real world life  and how they propel Bigby's leads to places they wouldn't otherwise go. Even if the conclusion is a tad predictable, the journey there is absolutely demented.

I don't really care for Telltale's episodic release format, and while I don't mind waiting for a season to be on the market in full before jumping into it, I'd sure love to be able to skip the previews and recaps bookending each episode. When TV shows are released on home video, those bits are edited out for a reason  once you're able to digest a story like this at your own pace, being reminded about something you just saw or getting a sneak peek of something you're about to watch is more than a little redundant. That's really the only hiccup, though, in what's quickly becoming one of the video game industry's most trustworthy narrative voices. I hope the latest season of The Walking Dead turns out well, because I don't like to imagine Telltale delivering anywhere under the extremely high bar that they've set.

If you enjoyed this The Wolf Among Us: A Telltale Games Series review, you're encouraged to discuss it with the author and with other members of the site's community. If you don't already have an HonestGamers account, you can sign up for one in a snap. Thank you for reading!

© 1998 - 2022 HonestGamers
None of the material contained within this site may be reproduced in any conceivable fashion without permission from the author(s) of said material. This site is not sponsored or endorsed by Nintendo, Sega, Sony, Microsoft, or any other such party. The Wolf Among Us: A Telltale Games Series is a registered trademark of its copyright holder. This site makes no claim to The Wolf Among Us: A Telltale Games Series, its characters, screenshots, artwork, music, or any intellectual property contained within. Opinions expressed on this site do not necessarily represent the opinion of site staff or sponsors. Staff and freelance reviews are typically written based on time spent with a retail review copy or review key for the game that is provided by its publisher.