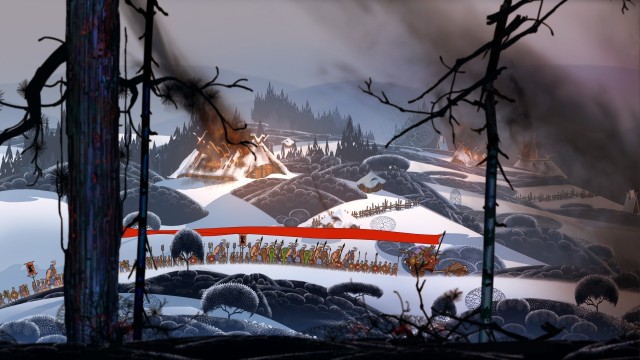 There doesn't seem to be a plot synopsis for The Banner Saga anywhere online. I know, because my first instinct upon completing the campaign was to look for one. It's a game that promises choices and subsequent consequences  as do so many these days  and I wanted to know just how fully developer Stoic lived up to their word. I wanted to know just how many of these deaths had really been my fault. I still don't know, but upon reflection, it doesn't matter. Maybe this whole ordeal plays out identically for everyone. Maybe these people always die at these specific moments. That doesn't change the fact that Banner made me feel a harsh tug at my stomach for every life lost under my command. If I've been manipulated, then Banner is a master manipulator.

It's a turn-based tactical RPG, and it's one of the most brutal turn-based tactical RPGs that I've ever played. This is not to say that it's difficult; on the contrary, until the final battle, I'm not sure that there's even a game over screen. But that's exactly the thing. In any other game, when you "lose," it's back to the last checkpoint for you. In Banner, when you suffer a defeat, you're expected to continue on regardless. Decisions in the heat of battle are made with the understanding that you'll be forced to live with any mistakes you make. Maybe your forces will still be licking their wounds when the next battle rolls around. Maybe you won't have enough food to last before your convoy hits the next town. Maybe people you like will die. Too bad. War doesn't have checkpoints.

What are we fighting for? Good question  the gods are dead, the sun has disappeared, and an army of golems called the Dredge have begun invading the lands, raiding villages and killing without remorse. Banner's Viking-themed world is one of the most uncomfortably bleak settings I've ever visited in a video game; of the many emotions you'll feel throughout the course of the campaign, optimism is rarely one of them. Hell, the game's primary antagonist is immortal, and I do not say that hyperbolically. He cannot be killed. When a character finally approaches you with a possible plan for defeating him, even she admits that it'll only be a temporary solution. It's hopeless here. 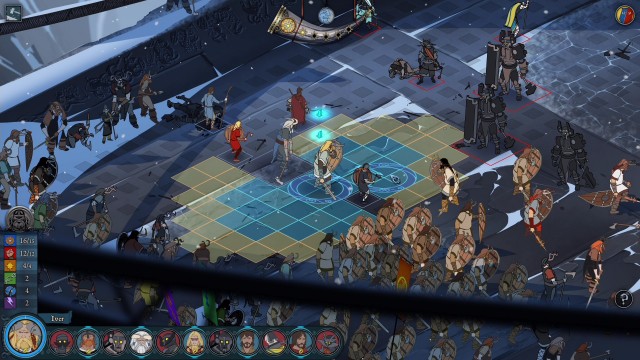 Fitting, then, that while much of Banner's narrative revolves around great kings and other intimidating authoritative figures, our centermost hero is an everyman whose only immediate ambition appears to be survival. Rook is an archer from a small town, only thrust into a position of leadership largely because he's honorable in a world that seems to have forgotten honor. Ensuring the safety of hundreds as they flee from invading Dredge forces proves to be a harsh lesson for him and, by extension, the player. Say you've just suffered casualties for trusting the wrong person. You then come across a group of under-equipped travelers who want to join your convoy. They promise to earn their place, and they will almost assuredly die in the wild if turned away. Will you risk it? At the start of the campaign, you will. By the end, when thousands have died under your command, you almost certainly will not.

While Banner is largely a turn-based tactical game in which you control six characters at once, it's framed with the much weightier task of having to shuttle hundreds (or even thousands) of people across mountains, forests, and frozen wastelands. The journey takes months and plays out like the darkest rendition of Oregon Trail that you could imagine. You're battling the Dredge, yes, but you're also battling famine, fatigue, low morale and even treachery. While much of what happens in Banner is story-based, it's supplemented by numerous randomly-generated events that could reverse your fortune, for better or worse, in a snap of the fingers. It's erratic, random, and unfair. You could go for over an hour with no grave hindrances, stumble into a battle, and then stumble into another battle while you're still recovering from the first. War doesn't wait for you to dust yourself off.

This probably sounds miserable, and it kind of is. But it's also engaging and even thrilling in that it makes nearly every other game feel like a mindless power fantasy by comparison. Everywhere else, you either win or you go home. In Banner, having to stomach your losses only makes your triumphs all the more special. While there's no permadeath in the Fire Emblem sense  any characters downed in battle will simply suffer from stat downgrades until they've had time to rest  Stoic is more interested in the large-scale consequences of your decisions, and important people can absolutely still die as a result of your leadership. Banner has stakes, and it feels good to overcome them.

It's all very maturely handled, too, not in the sense that it's gory or explicit  it isn't  but in that the characters talk like real people and important information is dispensed without resorting to expository dialog. This does mean that the first hour or so may be a bit off-putting, as you're still trying to gel with Norse-sounding proper nouns, but if you can get over the hump, you'll be treated to the most absorbing fictional universe I've seen in any game this year. That's not surprising when you consider that Stoic was founded by ex-BioWare employees, and it's essential. A game as heavy-handed as this needed to be believable. 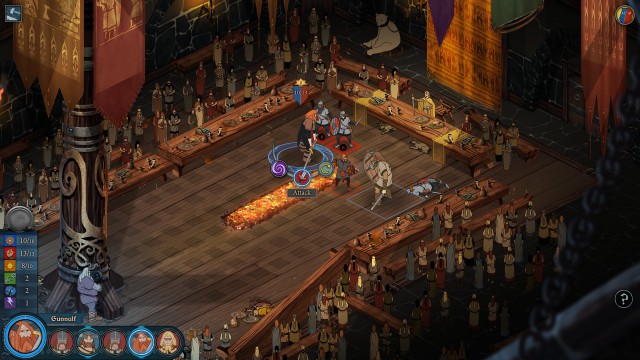 The actual turn-based battles are fine, though I warn you that they're not the reason anyone will love the game. There are a few nifty twists on the standard formula (like how the two sides trade turns for every move taken, regardless of how many people that they have on the field), but I frequently found myself wishing that the RPG elements were a bit more expansive. Then again, maybe it's for the best  given how quickly characters are coming and going (this is a true ensemble piece), maybe it's for the better that you don't get too attached to them.

As a means of conveying Banner's larger message about the bleakness of war in what is essentially a dead world, the battle system absolutely works, and I especially like the dynamic between basic human units and Varl, the horned giants who make up around half of Banner's cast and trade nimbleness for power. The campaign's only real hitch is the final battle, which feels a bit unfair for reasons I can't really discuss here. It's the one time in the game (as far as I can tell) in which losing officially results in a game over, and as such, having so much weighing against you makes the whole ordeal more frustrating than it needed to be.

As for the ending... well, it just so happens that Banner is the first chapter in a much longer proposed story (or saga, if you will), so if you hold any hope that the conflict with the Dredge will be met with a satisfying end, well, it certainly won't happen here. And, to be honest, maybe it never will. Most games are won. Banner, even when you've overcome your chief threats and accomplished what you've set out to do, is a game designed to be lost. Nearly anyone who reaches the game's credits will have gotten there by failing and making sacrifices. It's punishing, bold, and unforgettable. The game's absolutely stunning hand-drawn art style is reminiscent of old Disney movies, but don't let that fool you for a second. This is a grim, haunting game. It's been on my mind for weeks, and I'm sure it'll stay there years to come.

If you enjoyed this The Banner Saga review, you're encouraged to discuss it with the author and with other members of the site's community. If you don't already have an HonestGamers account, you can sign up for one in a snap. Thank you for reading!

© 1998 - 2022 HonestGamers
None of the material contained within this site may be reproduced in any conceivable fashion without permission from the author(s) of said material. This site is not sponsored or endorsed by Nintendo, Sega, Sony, Microsoft, or any other such party. The Banner Saga is a registered trademark of its copyright holder. This site makes no claim to The Banner Saga, its characters, screenshots, artwork, music, or any intellectual property contained within. Opinions expressed on this site do not necessarily represent the opinion of site staff or sponsors. Staff and freelance reviews are typically written based on time spent with a retail review copy or review key for the game that is provided by its publisher.