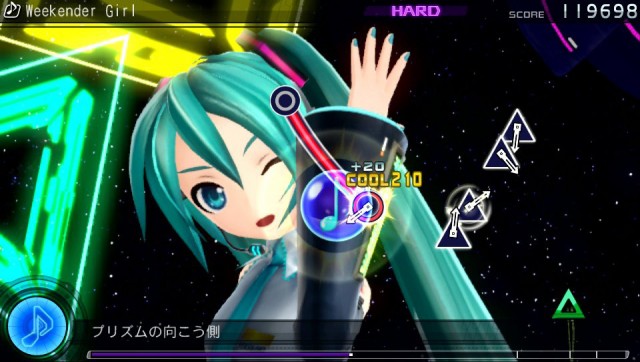 How on Earth did this game wind up in my collection? I rarely play rhythm games, I never listen to J-pop, and I didn't even know what a "vocaloid" was until now. Yet here's Hatsune Miku: Project DIVA f comfortably resting on my Vita home screen. It will not be leaving anytime soon.

I love this game, and I suspect that I will have a very difficult time selling it to you. It is a game in which music plays, button prompts appear on the screen, and you need to press the buttons in correspondence with the melody of the music. Can you tell that this is the first rhythm game that I've ever reviewed? Project DIVA f has a few unique flourishes, like having to "scratch" the touch screen at certain points in place of pressing buttons, but mechanically, there's very little separating it from such longtime genre staples as Gitaroo Man or PaRappa the Rapper or whatever other rhythm games are considered classics.

What makes Project DIVA f a standout is its presentation and, my goodness, the music.

Hatsune Miku is a vocaloid, meaning that she is virtual pop star. While her songs were obviously written by real people, the voice singing them was synthesized using some fancy technology that I won't even pretend to understand. When Miku sings, you're not hearing a human; that's the vocaloid doing all of the work. And while it's not quite perfect  higher notes tend to sound heavily auto-tuned  it's an impressive process, made even more remarkable by the fact that Miku is evidently a real-life superstar. I've seen videos now of her "performing" as a hologram in massive venues full of actual people screaming and waving glow sticks. She's a big thing in certain cultures other than our own.

I only know this through internet research, because Project DIVA f is deliberately unwelcoming. While the opening FMV and subsequent music videos depict Miku and her posse going on wild adventures together, any actual context bringing these characters together has been left out, and the songs themselves are still sung in their native language. Some of the subtitles are even in phonetic Japanese. As someone who doesn't speak Japanese and wasn't familiar with Miku until now, I couldn't possibly have felt more out of the loop. From what I understand, this is the first game of the series to be localized, so I can't be alone here.

Yet I was absorbed, and again, it's all thanks to presentation. The music videos accompanying each song are the best I've ever seen in the genre, frequently conveying stories even when the lyrical content is lost in translation, a perfect use of the medium's visual component in what is otherwise a music-driven experience. "ACUTE," Project DIVA f's centerpiece, is a gorgeous ballad depicting a love triangle between Miku, a rival female singer and a dashing blue-haired man. The video itself is little more than a carefully-executed dance routine, but that's all it needed to be. We see the two women stepping in unison while the man, Kaito, takes lead, but then when the two of them begin trading verses, there's visible interplay in their individual attempts to lure Kaito away from the other. The movements, camera angles, facial expressions and editing tell a story that transcends words. It's a wonder to watch.

And nearly every song here is presented with such visual care that I feel I've learned a great deal about these characters even though I'm a stranger to their history and I don't understand what they're saying. Kagamine Rin wears a massive white bow in her hair that greatly resembles bunny ears, and her huggable, candy-coated pop ditties are supplemented by the bright colors and simple shapes to rival a kindergarten classroom, underlining her innocent, childlike nature. Meanwhile, Megurine Luka's first song, "DYE," a shimmering synthpop track that presents its singer as shrill and distant, looks every bit as cold as it sounds, with Luka depicted as a solemn figure wandering alone through a frozen, futuristic wasteland. As an introduction to the character, we grasp that she is the mature, dignified counterpart to Miku's hair-whipping, hip-thrusting enthusiasm.

It's properly done even when it should be generic. Miku's second track, "Secret Police," is easily the hardest-hitting and rockingest thing here, and the video is little more than the diva herself performing in front of an audience; your standard headbanging and fist-pumping ensue. But it's shot, choreographed and edited with such expert energy that you're enthralled. Watching Miku make a gun gesture with her hands and bang off shots into the crowd while blazing through a rapid-fire verse is the sort of invigorating image that can make a rhythm game such as this one feel like so much more than a timed series of button prompts.

Beyond that, the music is just... really good. Honestly. As I said, I'm not into J-pop at all, and yet I consistently found myself humming various snippets of Project DIVA f's soundtrack while at work. It's that contagious. The basic pop stuff (like the deceitfully-titled "Melancholic") is catchier than the vast majority of the music that plays on American radios today, and frequent dips into other genres  some hair metal here, some new wave there  are welcome and fit nicely with Hatsune Miku's apparent focus on being an ensemble production rather than a simple celebration of the title character. The aforementioned (and lovely) "ACUTE" was my initial favorite, but "Stay with Me" has appropriately stayed with me as the most moving piece in the game, thanks to the prolonged strain in lead singer Meiko's voice during the chorus... and that's impressive, since the voice itself is totally synthesized.

Beyond the 40-some songs headlining the main campaign, there's also quite a bit of extra content, up to and including a shockingly robust video editor that I found too overwhelming to even attempt to toy with. This is supposedly the fifth entry in the series, and even without that knowledge, and can tell in a second that there's some dedicated groundwork here. Those who have been following Miku and her friends are likely having a field day with this game, and as a newcomer, Project DIVA f made me wish I was in that group. This game is too good at what it does to be an exclusive experience.

If you enjoyed this Hatsune Miku: Project DIVA f review, you're encouraged to discuss it with the author and with other members of the site's community. If you don't already have an HonestGamers account, you can sign up for one in a snap. Thank you for reading!

© 1998 - 2022 HonestGamers
None of the material contained within this site may be reproduced in any conceivable fashion without permission from the author(s) of said material. This site is not sponsored or endorsed by Nintendo, Sega, Sony, Microsoft, or any other such party. Hatsune Miku: Project DIVA f is a registered trademark of its copyright holder. This site makes no claim to Hatsune Miku: Project DIVA f, its characters, screenshots, artwork, music, or any intellectual property contained within. Opinions expressed on this site do not necessarily represent the opinion of site staff or sponsors. Staff and freelance reviews are typically written based on time spent with a retail review copy or review key for the game that is provided by its publisher.