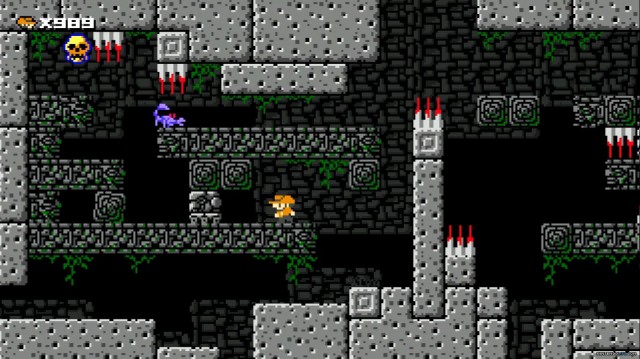 I'll never live this down, will I? While venting my frustrations toward 1001 Spikes on Twitter over the last couple of weeks, I was reminded by no fewer than four people that I'd reacted quite similarly to Dark Souls, a game that finally won me over once I'd forced myself to give it a fair chance. And it's a good point; I'm sometimes even second-guessing myself now. I'm notoriously easily-frustrated, and it's difficult, at times, to read whether a game is truly unreasonable or I'm just letting my temper get the better of me. I've come to the conclusion that if I have any business critiquing something like 1001 Spikes, it's only after I've beaten it. Surely then, no one could accuse me of being unfair to the game, or of simply sucking at it.

So I did that. I beat the game. And Jesus Christ.

I just did the math, and it would appear that I died 2518 times throughout the course of 1001 Spikes. Let's just say that the game's title might just be underselling the experience a bit. This is a platformer built, with often impressive intricacy, for the specific purpose of frustrating you. Very few of its levels last longer than a minute once you know what you're doing, but the process of actually familiarizing yourself with proper routes can sometimes take upwards of an hour. Each stage is so dense with spike traps, flying darts and falling platforms that there are few "safe spots," few instances in which you mustn't continue running and jumping. 1001 Spikes is the closest I've ever seen to a game for which the term "speedrun" has no meaning, because there are only two ways to approach it: the fastest way and the dead way.

And here's where we get into the meat of what constitutes as a "good" challenge. I've criticized far easier games for this sort of routine, so let's just get it out of the way: 1001 Spikes' particular brand of insta-death, hyper-memorization platforming isn't really my thing. I'm a fan of organic challenge, meaning that I enjoy actively applying acquired skills to new scenarios. My inherent problem with games like 1001 Spikes is that, yes, while it does take considerable finesse to ultimately pull some of this stuff off, much of the difficulty is derived from simple trial-and-error. I've described this sort of level design as "quick-time events without the button prompts," and it often feels as if you're wiping your slate clean every time you start a new level. 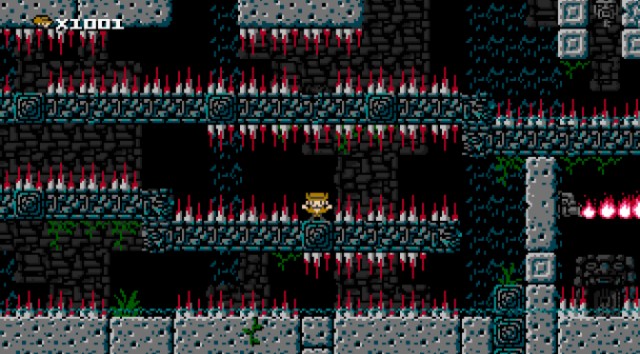 1001 Spikes came mighty close to desensitizing me to this process, though, if only because it's so relentless. A single level can demand dozens of perfectly-executed acrobatic maneuvers all in quick succession, and when so many retries are required, once-daunting obstacles quickly become trivial speed bumps. There's an undeniable satisfaction in almost subconsciously breezing through complicated sequences that once seemed overwhelming. For me, though, 1001 Spikes crosses the line on a few too many occasions. Putting a spike trap on the exit door of a level after I've already burned through over a hundred lives just to get there, for example, comes across as trolling. There's "challenge," and then there's just cruelty.

But, given that I'm not the target audience for this game, let's look at this a bit more objectively. One thing that I unquestionably admire is just how tightly-constructed its levels are, how reliably they can be read. Automated traps run on specific clocks, and anything triggered by the player is triggered in a precise manner. Nothing about 1001 Spikes' design is random or inconsistent; if you could somehow replicate the exact control input from a run, you'd get identical results. Whether or not you gel with this sort of game, that's an undeniable strength.

There's also a pretty staggering amount of content here, starting with the fact that 1001 Spikes is actually twice as long as it initially appears. After reaching the end of the world map, defeating a "final boss" and getting a credit roll, developer Nicalis pulls back the curtain and reveals that you're only actually halfway through the campaign, with the second half taking the story to an entirely new setting. It's nicely flexible; fans essentially get two games in one, while anyone who's overly frustrated with the 1001 Spikes (and lacks my commitment to informed criticism) can call it a day at the credits with little guilt. Beyond that, there are some bonus modes and a whole slew of unlockable characters, all framed with unique stories and handling in ways that fundamentally change how certain obstacles are approached.

But having said all of that, and even disregarding the fact that 1001 Spikes was often too difficult to be enjoyable by my own standards, Nicalis has made a number of decisions that I blatantly disagree with, and often made their game an outright struggle for me. The biggest perpetrator is the lives system. You begin with 1001 lives (naturally) and are rewarded hundreds more throughout the course of the campaign, which sounds generous. But when you're potentially burning through over a hundred per level, as reckless players such as myself will, you run the risk of hitting zero. While you thankfully won't be pulled back to the beginning when this happens, you will need to sit through a long, unskippable "game over" screen. It completely negates the quick-fire reload system that makes the nonstop death rate otherwise so tolerable, and the incredibly roundabout way of obtaining more lives involves lots and lots of needless grinding, making perseverance through 1001 Spikes's toughest bits even less enticing. 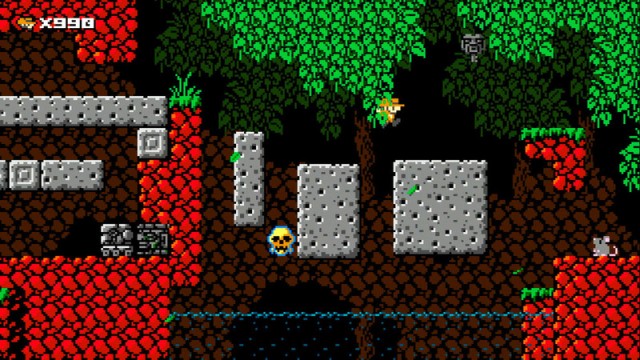 And while the game is tight as a gasket from a design standpoint, the same cannot quite be said of its controls. There's one mechanic that, on my honor as a Suskie, is broken. At a couple of points midway through the campaign, you need to deflect automated buzzsaws with your throwing knives, and there were a number of instances in which this just wouldn't work and would result in unnecessary deaths. I'd throw a knife, I'd see a spark resulting from contact between the two, and then the buzzsaw would carry on regardless and slice me in half. It was infuriating every single time it happened.

In fact, the knives are pretty wonky altogether. You'll also need to throw them now and again to block incoming darts, but if the dart in question is too close, the game will often decide that you're dead even if you visibly, provably managed to get a knife off before you were struck. While these issues aren't necessarily common, they're a significant hindrance in a game that's already calculated to make you scream. It's the same problem that I had with the occasionally flimsy hit detection in Dark Souls. If your game demands perfection from me, fair enough, but I'm going to expect perfection from your game in return.

It's for those reasons that 1001 Spikes was ultimately too much for me, and why, even after I've seen it to completion, I can't honestly say that I "liked" it. I do respect it as a treasure trove for genre enthusiasts, though, and while I spent much of my time in danger of damaging my Vita, I spent just as much admiring the intricacy of its sadism and the often brilliant comic timing of its deaths. The hardcore should absolutely check it out, but for the casuals and nonbelievers, 1001 Spikes is a dangerous, dangerous game. That's my verdict, and it's my gift to you. I hope you enjoy it, because it took me a mountain of stressful work to deliver it.

If you enjoyed this 1001 Spikes review, you're encouraged to discuss it with the author and with other members of the site's community. If you don't already have an HonestGamers account, you can sign up for one in a snap. Thank you for reading!

© 1998 - 2022 HonestGamers
None of the material contained within this site may be reproduced in any conceivable fashion without permission from the author(s) of said material. This site is not sponsored or endorsed by Nintendo, Sega, Sony, Microsoft, or any other such party. 1001 Spikes is a registered trademark of its copyright holder. This site makes no claim to 1001 Spikes, its characters, screenshots, artwork, music, or any intellectual property contained within. Opinions expressed on this site do not necessarily represent the opinion of site staff or sponsors. Staff and freelance reviews are typically written based on time spent with a retail review copy or review key for the game that is provided by its publisher.