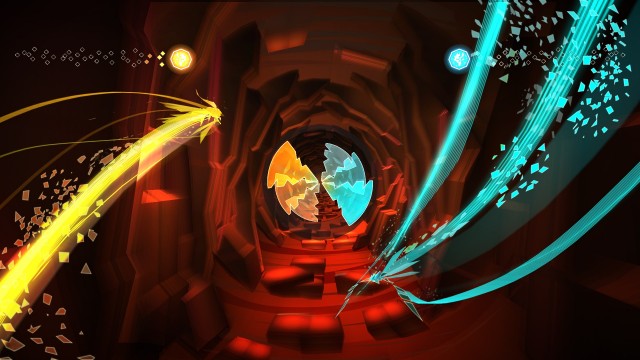 Entwined was famously announced the very day that it was released worldwide, and as such, we don't have a great deal of backstory with which to contextualize it. What I can tell you from having played it is that Sony is clearly digging from the same mine in which they unearthed Thatgamecompany. Not only is developer Pixelopus composed of game design students plucked fresh from school, but their first title employs many of the tricks previously seen in Flower and Journey: a vibrant but simple color palette, an accentuation on hypnotic audiovisual absorption and a story that attempts to address important and universally-relatable themes with little context or dialog.

So how does Entwined compare to Thatgamecompany's work? Dunno. I haven't played their stuff. But Entwined is okay.

It tasks you with steering both a bird and a fish simultaneously as the two soar through long and rather colorful tunnels. Each character occupies half of the circle, and each is controlled with a separate analog stick. You gather energy by guiding the bird and fish through gates that appear along the outer edges of the tunnel, and when their energy bars join, they merge into a dragon, and Entwined shifts into a free-fly mode wherein the dragon collects orbs and then trails light through the sky, for some reason.

That's about it, which underlines Entwined's biggest problem: There just isn't much to it. There are nine chapters, and each of them progresses in exactly the manner that I described above. The game doesn't evolve; the mechanics that you use in the first level are the same mechanics that you'll be using throughout the entire campaign. The only variance is in the audiovisual presentation of each stage. That's admittedly something; the whole thing plays like a more controlled version Audiosurf, less an action-puzzler than a straight-up rhythm game, so simply having something new to listen to with each level can make a difference, especially when the gate spawn patterns correspond nicely to the melody of each track. But beyond that, there's no depth here.

And it's kind of fun, sure. As simple as the game is, the multitasking required in steering two separate characters at once makes Entwined a hair tougher than it looks, and the game's relatively stress-free approach to the completion of its central goal  you can take as long as you want to fill the energy meter  gives you all the time in the world to get absorbed by Entwined's mesmerizing aesthetic. For sure, while Pixelopus is clearly channeling Thatgamecompany here  so clearly that even someone relatively unfamiliar with their work can pick it out, as I have  Entwined's visual style is gorgeous, and the soundtrack is superb. In short bursts, the game is an absolute success.

Trouble is that you can finish it in just over an hour and, to be honest, I couldn't have imagined the game lasting much longer than that, anyway, given how simplistic and shallow it is. What hurts even more is that Pixelopus was clearly striving for a weightier narrative than they've delivered. There's this hint that the bird and the fish are in love but can't be together, and then at the end of each level they join and become something beautiful, so I guess the point is that love makes you stronger, even when it tears down boundaries? As far as messages go, "love is good" isn't terribly profound. This tends to be the gamble with artsy-fartsy games like Entwined  when they don't stick the landing, they come across as that much more pretentious as a result. Whatever story has been attempted here feels like poetry written by someone with no understanding of cadence.

As a rhythm game, though? It's decent, I suppose, lovely to look at and even lovelier to listen to, with a solid core mechanic and not much else. I'm not sure that it's worth the ten bucks that they're currently asking for it, but when it's inevitably free on PlayStation Plus, sure, put aside an hour and lose yourself in the splendor.

If you enjoyed this Entwined review, you're encouraged to discuss it with the author and with other members of the site's community. If you don't already have an HonestGamers account, you can sign up for one in a snap. Thank you for reading!

© 1998 - 2022 HonestGamers
None of the material contained within this site may be reproduced in any conceivable fashion without permission from the author(s) of said material. This site is not sponsored or endorsed by Nintendo, Sega, Sony, Microsoft, or any other such party. Entwined is a registered trademark of its copyright holder. This site makes no claim to Entwined, its characters, screenshots, artwork, music, or any intellectual property contained within. Opinions expressed on this site do not necessarily represent the opinion of site staff or sponsors. Staff and freelance reviews are typically written based on time spent with a retail review copy or review key for the game that is provided by its publisher.