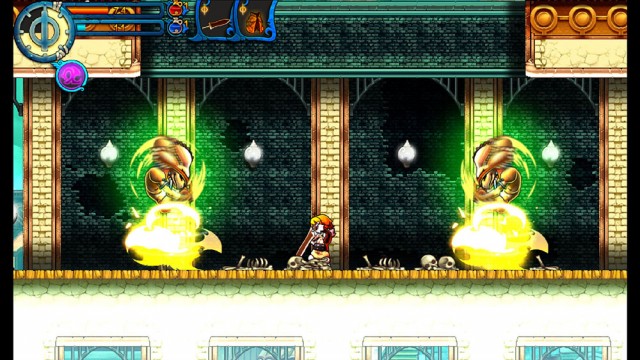 Valdis Story: Abyssal City may have benefitted from circumstance. See, I've had two distinct cravings lately: for a good Metroidvania, and for combat that's brutal but rewards patient, calculating mastery (following my unexpected rise to Dark Souls fandom earlier this year). Valdis Story, at its best, is a beautiful marriage of those two qualities. It was developed, from what I can gather, by a two-person team (with another two handling the music and sound effects), and I could list a thousand deficiencies in the presentation, controls and design that border on rookie mistakes. But what it does well, it does spectacularly. It is precisely the game that I needed at this exact moment.

A self-proclaimed tribute to the Metroidvania formula, Valdis Story definitely leans more in the Castlevania direction in that it's fantasy-themed and has a strong focus on melee combat and magic use. It's also far more difficult than any actual Castlevania I've ever played, so that's a plus. It's one of the rare action RPGs that places equal importance on the "action" and the "RPG." Yes, leveling up makes a difference. Yes, there will be situations in which certain builds, equipment sets and NPC allies will give some players an advantage over others. But between the four unique playable characters and a shockingly robust combat system, overcoming challenges in Valdis Story is as much about deftness as it is about prep work.

I name Valdis Story's boss battles as the game's greatest accomplishment, and I commend Endless Fluff for understanding this particular institution of game design more than some of the world's most experienced developers. You know how most bosses are just great big lumbering bastards with easy-predicted attacks and glowing weak spots? Valdis Story's are not. They tend to be your size and actually fight as if there's someone behind the wheel. They have movesets that can be understood and even read, but they don't have "patterns." They use whatever attack is most effective at any particular moment. Beating them is an exercise not in repetition but in prodding for weaknesses, knowing your own strengths and ultimately outmaneuvering. Every boss battle won gives you the sensation of having mastered something. They're incredible. 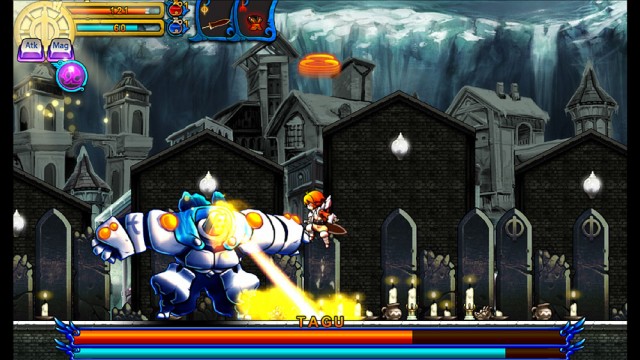 Or rather, they're incredible about 90% of the time. The ultimate frustration of Valdis Story is that everything it nails it occasionally really bungles. In this case, the pointlessly infuriating final boss comes to mind. On the surface, it's a mindless bullet hell sandwich that has no place in such an intelligently laid out game. The more underlying issue, however, is that there comes a point during the battle in which the player is required to dish out a significant amount of damage within a limited period of time, or else the boss will instantaneously recharge its shield. If you're not strong enough, you're not bringing the boss down.

I eventually resigned to combing forums for good strategies and, as per one GameFAQs user's advice, had to backtrack to the yada-yada to find the blah-de-blah that ultimately gave me the edge in the fight, and having to do that was kind of disheartening. Why, just three paragraphs ago, I was praising Valdis Story for being driven as much by skill as stat-boosting, and there I was, in the endgame, stat-boosting my way to an empty victory.

The important thing to bear in mind about Valdis Story, however, is that for as numerous as its missteps are, and for as enraging as they can be, they're always outweighed. Take the platforming, which Valdis Story has in abundance. It demands pinpoint precision in ways that the controls sometimes don't often feel tailored for  the main character tends to move just a bit too fast, and ledge-grabbing feels incredibly finicky whenever it's called for (particularly in a late area full of electrified floors). Worse yet, one particular type of switch can only be triggered by holding the same button used to cast a magic spell, leading to a number of instances in which a platforming sequence reliant on rigid timing fails because your character threw a fireball or whatever. 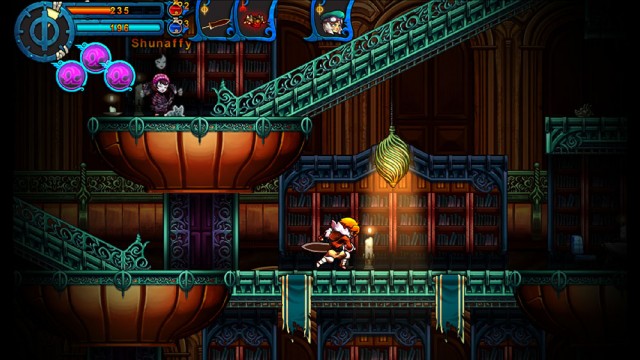 So that's annoying, but then the platforming bits themselves are brilliant in design, which kinda makes the whole thing worth its roughness. It reminds me very much of last year's Guacamelee, and that's a high compliment. It, too, often demands preciseness and swiftness to almost superhuman degrees. It, too, will have you chaining complex movements in single motions. It, too, faces you with tasks that make you say, "How could I possibly pull that off?!" and then dares you to, in fact, pull that off. Smartly, many of Valdis Story's most difficult platforming bits are optional and serve to reward those who persevere with bonus items, a clever way of incorporating RPG elements into a distinctly un-RPG-like gameplay style.

And so Valdis Story is a game of double-edged "buts." The game doesn't scale well to higher resolutions, but the visual style (that of a JRPG starring Gorillaz members, basically) is strong enough that you'll put up with it. The story's scope is clearly hampered by a limited budget and the script is full of grammatical errors, but the history and lore of the titular abyssal city are considerably richer than most developers of this ilk would even bother with. The map system is kind of clunky and objectives aren't well-outlined, but the branching world is so much fun to explore, and re-explore, that you won't mind getting lost in it. That last bit is the kicker for a Metroidvania, and Valdis Story handles encouragement of exploration exceptionally well; even simple things like reaching high ledges and crossing long gaps have delightfully unconventional solutions.

So, yeah, I dig it. It's extremely rough around the edges, unpolished, unrefined and even unbalanced in spots (watch out for the stagger-crazy miniboss in the region with all of the purple fire), but the core combat is absolutely bliss, the game is a joy to look at and listen to, and the whole thing is a rather effective juggling act between running you into brick walls and daring you to break through the brick walls. The cold, calculating critic in me says that Endless Fluff still has a lot to learn, but the Metroidvania fan in me argues that Valdis Story had me more absorbed than the vast majority of games like this.

P.S. I finally got around to testing out a third-party Dual Shock 4 driver for this game, and I suggest you do the same, if possible. Playing this with a keyboard or an Xbox 360 d-pad sounds like hell to me.

If you enjoyed this Valdis Story: Abyssal City review, you're encouraged to discuss it with the author and with other members of the site's community. If you don't already have an HonestGamers account, you can sign up for one in a snap. Thank you for reading!

© 1998 - 2022 HonestGamers
None of the material contained within this site may be reproduced in any conceivable fashion without permission from the author(s) of said material. This site is not sponsored or endorsed by Nintendo, Sega, Sony, Microsoft, or any other such party. Valdis Story: Abyssal City is a registered trademark of its copyright holder. This site makes no claim to Valdis Story: Abyssal City, its characters, screenshots, artwork, music, or any intellectual property contained within. Opinions expressed on this site do not necessarily represent the opinion of site staff or sponsors. Staff and freelance reviews are typically written based on time spent with a retail review copy or review key for the game that is provided by its publisher.