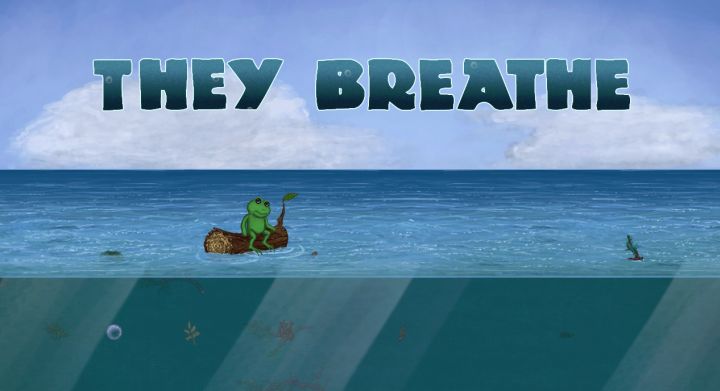 The frog sits on a floating branch, gazing mournfully at the clear water beneath him. Youre offered no direction, no helping hand in what to do next. Perhaps the frog would be better off if you just left him in his bubble of melancholy. But youre not going to do that, are you? So you dive into the water, and you swim down.

They Breathes world is slowly bought into focus the further you descend. First, you encounter a pair of fellow frogs that are struggling for air. Wordlessly, the game urges you to save them, which you can do by nudging them into ascending air bubbles until they catch their breath and escape the screen. Its not an easy task; the other frogs are uncooperative, unwilling to struggle for their own air, so need it all done for them. Pushing them into these bubbles is both fiddly and clumsy. Then, for the first time, you discover frogs arent all lurking thats in the depths. 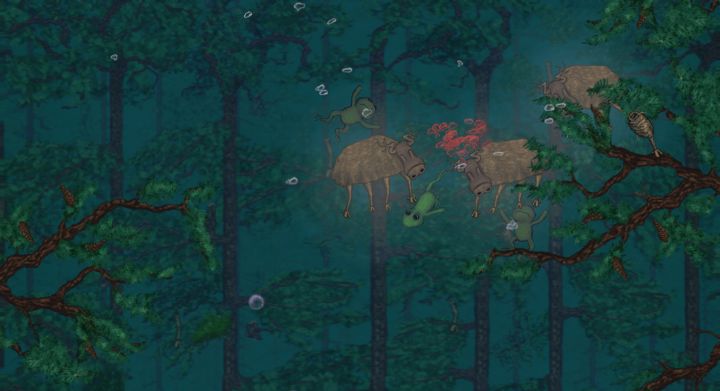 These strange aquatic cattle seem almost whimsical and, as nothing has posed you any threat thus far, theres no reason to suspect these will start now. Until they barrel into you, forcing bubbles of blood from your lungs, or wrap their legs around you and drag you to the bottom of the screen. Your first moose encounter can quickly turn to blind panic if you let it; busy trying to save your fellow frogs, theres suddenly a predator in your midst, causing you direct harm and competing for the meagre air supply. If you zoom around the screen to evade it, it will attack the frogs you abandon. If you try to protect them, it will eat all your air and smash the life from your body. Maybe this means sacrificing your friends; maybe youll find a way for everyone to live. You do what you have to do, and then you move on. Youve further down to swim yet.

The moose dont make sense, but they hunt you down, appearing from the depths of the screen, accompanied by flashes of unexplained light. Soon, your surroundings subtly change until you realise youre exploring a flooded forest, trees swaying in the current slowly dominating your backdrop. But theres only one way to go, and you submerge deeper, past surreal plants until poisoned moose spew green oxygen bubbles that cause you no small amount of harm. Until huge jellyfish creatures swarm you in hoards, snatching you or your struggling brethren and dragging you down to your death. You can fight them off, but only at the cost of your most precious commodity. Air bubbles become scarcer and scarcer. Theres not enough to go around. Something has to give. 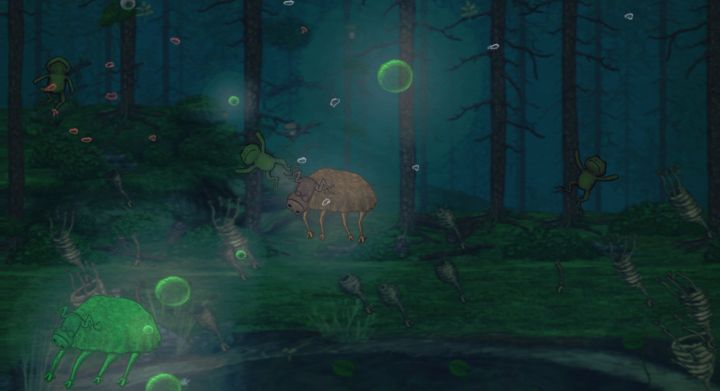 But youve further down to swim yet.

They Breathes depths have a dreamlike and appalling element to them, wrapped up in their hand-drawn HD graphics, filled with simplistic expressions of panic, submission and ultimate surrender. The only sympathetic creatures out there are your fellow frogs, and theyre dying as you find them. Everything else slowly starts to make ghastly sense the further down you explore until you reach the bottom. Then, theres a moment, a disquieting, unsettling moment, when everything suddenly makes alarming sense. And then nothing the game has ever displayed can be looked at the same way again.

If you enjoyed this They Breathe review, you're encouraged to discuss it with the author and with other members of the site's community. If you don't already have an HonestGamers account, you can sign up for one in a snap. Thank you for reading!

© 1998-2021 HonestGamers
None of the material contained within this site may be reproduced in any conceivable fashion without permission from the author(s) of said material. This site is not sponsored or endorsed by Nintendo, Sega, Sony, Microsoft, or any other such party. They Breathe is a registered trademark of its copyright holder. This site makes no claim to They Breathe, its characters, screenshots, artwork, music, or any intellectual property contained within. Opinions expressed on this site do not necessarily represent the opinion of site staff or sponsors. Staff and freelance reviews are typically written based on time spent with a retail review copy or review key for the game that is provided by its publisher.