Batman: Arkham Origins Blackgate was not treated kindly during its initial run on handhelds last year, and the most common criticism was the map. Having not played the original version, I can't comment, but I understand the concern. In an exploration-heavy Metroidvania type, you need to be properly orientated, and whatever issue initially plagued Blackgate was apparently major enough to send developer Armature Studio back to the drawing board for the game's rerelease on consoles and PC, dubbed "Deluxe Edition" (officially extending the title to six words). This is what they came up with: 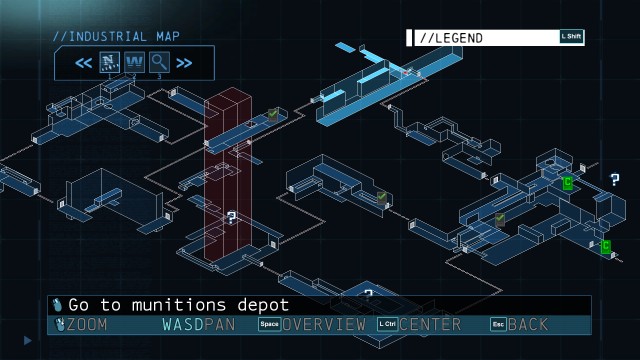 It was pointed out to me that the team responsible for Blackgate was founded by ex-members of Retro Studios, and, you know, if anyone should understand what made Metroid Prime such a great game, I'd think it would be the people who made Metroid Prime. But there I was, crossing blades with an isometric, non-rotatable map. There I was, being forced to scan every interactive object in the environment before being permitted to pull it down, or blow it up, or electrify it... even if I'd already figured out what I was supposed to do. There I was, running an endgame fetch quest back across the entire game world, a drab, convoluted place that I had no interest in exploring even further by that point.

Blackgate is the world's most lukewarm Arkham game parceled up in the world's most confused Metroid game. It's technically 2D, though you'd be forgiven for not surmising that by looking at the map. See, while it's a side-scroller, Blackgate's two-dimensional planes constantly wrap and twist and intersect, creating a fully 3D world even though you're only ever permitted to move left and right. I cannot for the life of me understand the point of this. Crafting a fully three-dimensional world without freedom of movement only adds an unnecessary layer of convolution. You can't just go somewhere; you've got to figure out how to cross from one plane to the next. It makes wrapping your mind around the game's disastrous map system even more tedious.

I'll admit that there's a mild thrill in seeing the usual Arkham formula applied to Metroidvania sensibilities, something that the series kind of touched upon with Asylum but then dropped in favor of a sandbox approach. We'll ignore that Batman is just unearthing the usual arsenal here, and we'll look past the fact that they're all found in WayneTech crates scattered throughout Arkham, because shipping Batman gadgets to prison facilities is just something that Bruce Wayne is doing now, apparently. There is some mild fun to be had in returning to an old location with an expanded inventory and uncovering things that were out of reach before. I'm a sucker for this design philosophy and Blackgate occasionally gets it; that the game's three major areas can be tackled in any order the player desires is a neat bonus.

But that map. Ugh. A pseudo-isometric viewpoint by definition means that there's no sense of perspective, meaning that it's often difficult to tell where one thing is in relation to another thing. When rooms begin overlapping and you can't even accurately discern where an objective marker is located, you're forced to ditch the map entirely and just navigate by memorizing routes. If Metroid Prime's map had been handled like this, the game would have been a chore. 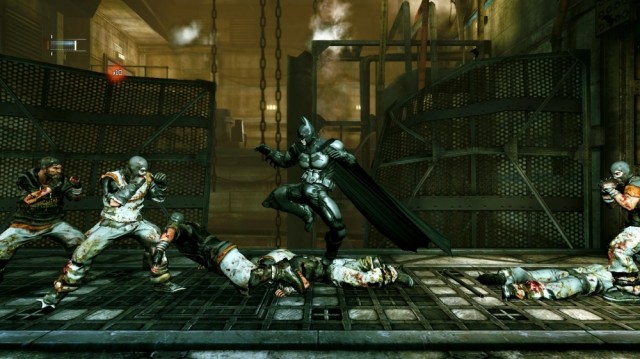 So from a design standpoint, Blackgate shows fleeting promise but is ultimately let down by questionable layout decisions, which at least makes it a better Metroid game than an Arkham game. Armature haphazardly plucked the usual set of mechanics from the console games without taking a moment to determine why they worked so well to begin with. The Arkham combat, for instance, was fun in allowing Batman to quickly and gracefully plow through swarms of goons attacking from every direction. Here, they attack from two directions, and everyone who isn't to Batman's immediate left or right just kind of chills and waits for the chance to jump into the playing field. You clear any fight by just button-mashing in one direction and keeping an eye for the counter prompt in the other direction. It's easy and boring.

The stealth functions even worse in a 2D environment, because the whole joy was in being able to crawl, glide and fling yourself across massive 3D playgrounds, toying with enemies who never even knew exactly where you were (if you were playing properly, at least). A side-scrolling perspective severely limits that, and Armature typically compensates by only pitting Batman against two or three gun-wielding thugs at a time. You can clear most stealth scenarios by just taking out one guy in a noisy, uncoordinated flash and then absorbing bullet damage until the one other guy is dealt with. That's when the stealth works properly, at least. On multiple occasions, enemies detected me, standing perfectly still, through solid walls and floors. On multiple occasions, enemies heard things that they shouldn't have heard, as per the game's established rules. On multiple occasions, remote-detonating an explosion alerted enemies to my exact location on the opposite side of the room.

And who are these backpack-wearing thugs in the Penguin's levels who can only be defeated with a Batclaw from behind? Why can't they be snared or, for that matter, punched in the face like any other guard? Why aren't these guys running the show if they can block frontal assaults from freaking Batman?

All of these issues are compounded by the boss fights, the aspect of Blackgate that finally broke me. At their best, they're unimaginative, glorified quick-time events, and every encounter seems to frustratingly play out with Batman landing exactly one hit before stepping back and giving his adversary a chance to rest up and continue the fight. At their worst, Blackgate's bosses incorporate stealth to the laziest degree. The top offender is Black Mask. You beat him by sneaking up on him, and you can only do that by memorizing a series of context-specific actions; try to take him out by stepping under a light source and it's instant death, even when you're crouched and he's shooting in the opposite direction. It's cheap, pointless and infuriating. This material is an insult to the series that once produced the Mr. Freeze fight, one of the most creative and memorable bosses in video game history. 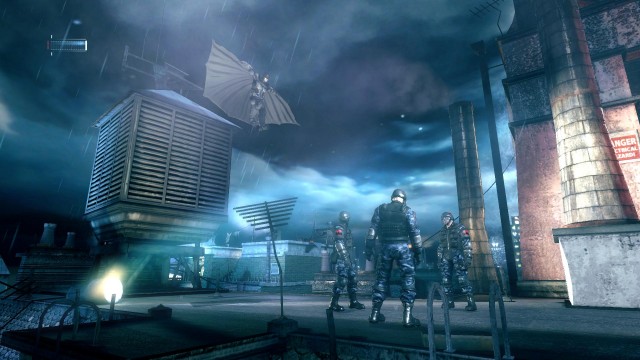 I initially found Blackgate at least tolerable thanks to its occasionally effective Metroid-esque design philosophy. By the time I was asked, at the very end of the campaign, to run back through the entire world rescuing hostages in a clumsy late-game attempt to pad out the play time, I contemplated throwing in the towel, having endured my fill of broken stealth segments and painful boss battles. I'd thought that even handhelds had moved beyond settling for watered-down renditions of successful console formulas, with content like Tearaway and Killzone: Mercenary proving that you can deliver properly modern gaming experiences on more limited platforms. By Vita standards, Blackgate is a mess; by PC standards, it's borderline irredeemable, and any game that actually makes me want to go back and give Arkham Origins another shot has mined new depths of pointlessness.

If you enjoyed this Batman: Arkham Origins Blackgate - Deluxe Edition review, you're encouraged to discuss it with the author and with other members of the site's community. If you don't already have an HonestGamers account, you can sign up for one in a snap. Thank you for reading!

© 1998 - 2022 HonestGamers
None of the material contained within this site may be reproduced in any conceivable fashion without permission from the author(s) of said material. This site is not sponsored or endorsed by Nintendo, Sega, Sony, Microsoft, or any other such party. Batman: Arkham Origins Blackgate - Deluxe Edition is a registered trademark of its copyright holder. This site makes no claim to Batman: Arkham Origins Blackgate - Deluxe Edition, its characters, screenshots, artwork, music, or any intellectual property contained within. Opinions expressed on this site do not necessarily represent the opinion of site staff or sponsors. Staff and freelance reviews are typically written based on time spent with a retail review copy or review key for the game that is provided by its publisher.