Micro Mania on the Master System

You would think that racing with a car the size of a rubber eraser would be...less than thrilling. In Micro Machines...youd be wrong. Whether you are careening around a desktop in a micro sports car, blasting enemies away with a micro tank, or getting wet in the bathtub with your micro power boat, Micro Machines provides enough fun and diversity to satisfy any racing appetite...big or small. Even better, the game allows for 2-players to compete against each other in a head-to-head mode...something a bit uncommon (but very welcome) on the Master System. How good the game looks also needs to be commented on...and the comment is awesome! 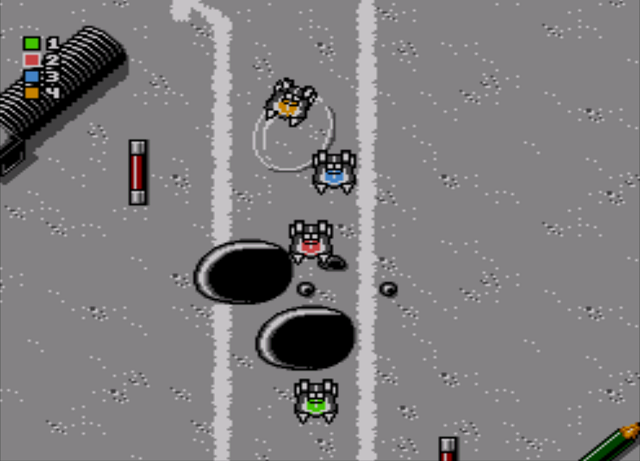 Where There is Good...There is Bad
Micro Machines has a lot of things going for it, but it also has a lot of key flaws that really have a negative impact on the experience. Perhaps the greatest flaw demolishes the greatest draw of the game in 2-player head-to-head mode. This mode is kind of like racing your partner in a three-legged race. You are both tied to the same game screen and everytime that somebody reaches the edge of the screen, the game resets you both (although it does award the player who has won that screen). This really ruins the exhilaration of racing against buddies unless you are both pretty evenly skilled as you will suffer multiple race resets and quickly win or lose a race before even completing a lap sometimes! Limiting you both to just one screen with constant resets utterly destroys any flow or fun to be found when racing, totally wrecking head-to-head mode. With mentioning the game screen should come with mentioning how horrendous the camera angle (which is a top-down perspective) is, as it really hinders the players ability to see the track and, on races with the faster cars, requires the player to memorize the tracks in order to win on them. This makes a game, which is truly fun at first, become an exercise in memorization and tedium as you repeatedly race through tracks until you are familiar enough with every turn and obstacle to react to them BEFORE they are on the screen. Another thing that deserves to be mentioned is the sound...or lack thereof...during the races. While there are some fun melodies in-between races or during a selection screen, during the races you are forced to endure the endless tune of your racing motor. 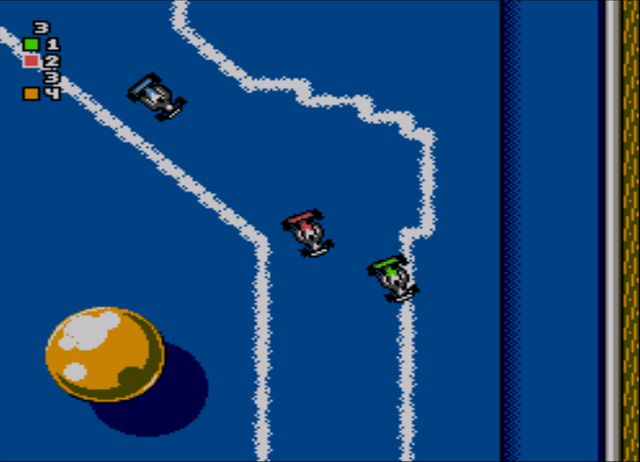 I really had a lot of fun playing Micro Machines for the first couple hours. However, trying to beat the 22 race challenge mode got to be really tiresome as most of the later races required me to memorize the track (and sometimes find some corners to cut) in order to win. One of the things that would normally be a flaw, atrocious AI, became really beneficial as sometimes one the racers would get stuck on an obstacle (like a jump) and be unable to pass it. I was really disappointed in the head-to-head mode as well, because the game is really fun to play...but limiting you to just one screen to race on ruins any sense of speed or fun. It also really requires the player in the lead to have every inch of the track memorized as they have even less time to react from being near the edge of the screen. Overall, Id give Micro Machines a 6/10 as it is a decent game, but really flawed in a lot of ways. If you are a racing fan, this game is certainly worth a spin. However, for the majority of players it will really be a hit-or-miss experience.

If you enjoyed this Micro Machines review, you're encouraged to discuss it with the author and with other members of the site's community. If you don't already have an HonestGamers account, you can sign up for one in a snap. Thank you for reading!

© 1998-2021 HonestGamers
None of the material contained within this site may be reproduced in any conceivable fashion without permission from the author(s) of said material. This site is not sponsored or endorsed by Nintendo, Sega, Sony, Microsoft, or any other such party. Micro Machines is a registered trademark of its copyright holder. This site makes no claim to Micro Machines, its characters, screenshots, artwork, music, or any intellectual property contained within. Opinions expressed on this site do not necessarily represent the opinion of site staff or sponsors. Staff and freelance reviews are typically written based on time spent with a retail review copy or review key for the game that is provided by its publisher.