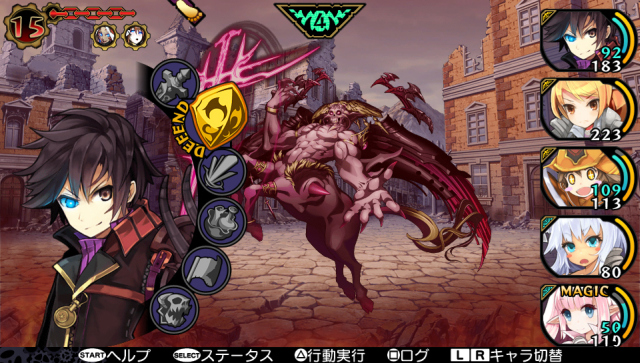 Demon Gaze is an amalgamation of elements that are slowly being phased out of this industry in that it's brutally difficult, short on animation and kind of sexist. It's a first-person dungeon crawler, and it is a hardcore first-person dungeon crawler at that. It runs you into a brick wall with its very first boss encounter and then asks you to beat yourself into shape by traipsing through grid-based levels and waging battles in which sprites wiggle at one another and numbers flash across the screen. Whether or not you'd describe this setup as "retro" or "archaic" is probably indicative of whether or not you fall into Demon Gaze's target audience.

Personally, the bare-bones presentation and square-one difficulty spike made for an unwelcoming combination that likely would have resulted in me shelving Demon Gaze if I hadn't been tasked with reviewing the game. Once I got over the hump, I grew more respectful of the clever ways in which developer Kadokawa Games hooked me, but no less put off by the uncomfortably fetishistic world that I was entrenched in. I wanted to keep playing, but I sorta wished I didn't.

The most flattering thing that I can say about Demon Gaze is that, for a game that demands this many hours invested in grinding, it does a remarkably solid job of ensuring players that their time is being spent productively. I tend to think that "grinding" in an RPG like this typically equates to wandering around killing random enemies until the numbers in the pause menu are higher than they were before, but there's considerably more to Demon Gaze than that in the way that farming item drops, upgrading equipment and managing funds tie together into a constantly-expanding puzzle.

Let's say that Oz, the main character, is wielding a sword, and I want him to wield a better one. My first step would be to use gems, which can be employed at save points to categorically trigger item drops. If I leave a sword gem at a save point and then win the ensuing battle, my spoils will include a fresh new sword. If it's lame, my next course would be to take it back to the inn, Demon Gaze's hub, and have it broken down into weapon-specific Ether to upgrade the sword that Oz is already holding. Failing that, I can also sell the sword, and money is considerably more important in Demon Gaze than in most other RPGs. You can have up to five people in your party, but the cost for each extra room increases exponentially, and you've got to worry about paying rent each time you return from a hunting-gathering trip.

So, yeah, you can bash your head against the game's wall of demons until your party is arbitrarily strong enough to take down the next boss, but that takes too long and it's boring. Growing an understanding for Demon Gaze's undercurrent of resource management is considerably more rewarding and keeps interest levels high, which is good, because Demon Gaze doesn't have a whole lot else going for it.

For one thing, the battle system is basic to a fault. There are some great character designs and lovely 2D art on display here, and I adore the soundtrack, a rather genre-blending stew of J-pop and prog metal. Aside from that, though, this is first-person dungeon crawling on the most primitive level; there's virtually no animation, and battles are followed less by actually watching them and more by reading the text scroll at the bottom of the screen. It's humdrum stuff, too  despite an absurd level of customization (you can give a male party member a female voice, assign races that don't match the character art, etc.), most of the classes are your standard fighters and casters. Magic becomes kind of a precious commodity since MP-restoring items are rare, so once you're comfortable in an area, you'll clear most battles by just trading physical attacks. Demon Gaze even gives you the option of pressing a single button to repeat all of your selections from the previous round.

The game's setup is that Oz (who's an amnesiac, naturally) has the rare gift of being able to capture large demons and pit them against his enemies. This angle was marketed as sort of Pokémon-esque spin, but in reality, there are only a handful of demons to be captured, and their input equates to glorified summon attacks. This system essentially adds an extra character to your party, one that you have no control over and that may actually turn on you if its energy drops too low (a cool touch). It's a nice gimmick, but certainly not the game-carrying feature that it's been made out to be.

Beyond that, the story itself is so generic  "Demon Gazer" is basically just code for "Chosen One"  that even the characters involved in it don't seem particularly engaged, which is kind of ironic, given how one-dimensional these people are themselves. The faceless mercenaries are all bumbling idiots, the two shopkeepers are always getting into infantile fights, and nearly all of the women are overly sexualized (or fetishized) either in appearance or personality. There comes a point in which the only prominent female character who (a) is dressed sensibly and (b) isn't a furry strips down to her bra and panties and demands that you study and grope her body just to prove that she isn't a demon in disguise. You're even given the option to refuse, but she forces you to do it anyway.

And on that note, what is it with Demon Gaze's obsession with underwear? The inn's priestess frequently struts about wearing nothing but her undergarments, the maid gets off from sniffing other people's panties, and "undies" are actually an armor category. Look, I'm playing Conception II at the moment and finding it every inch as perverted as I'd been told, but at least that game has a plot-specific purpose for this stuff, even if it's overplayed. Demon Gaze is pure fan service, and it's all the cheaper for it.

I guess there's an audience for that sort of material, though, and it underlines just how pointed an experience Demon Gaze is. If you fit fully into its demographic  seeking an aggressively old-school dungeon crawler full of bulging breasts  then Demon Gaze has a lot of meat on its bones, offering a stylish interface, an expansive world and a satisfyingly multi-pronged approach to grinding. For everyone else, though, it'll likely be too bland, too juvenile, or some combination of the two. It's the sort of game you play with one eye while marathoning a TV show. Speaking of which, man, the Greyjoys are really up their own asses, eh?

If you enjoyed this Demon Gaze review, you're encouraged to discuss it with the author and with other members of the site's community. If you don't already have an HonestGamers account, you can sign up for one in a snap. Thank you for reading!

© 1998-2021 HonestGamers
None of the material contained within this site may be reproduced in any conceivable fashion without permission from the author(s) of said material. This site is not sponsored or endorsed by Nintendo, Sega, Sony, Microsoft, or any other such party. Demon Gaze is a registered trademark of its copyright holder. This site makes no claim to Demon Gaze, its characters, screenshots, artwork, music, or any intellectual property contained within. Opinions expressed on this site do not necessarily represent the opinion of site staff or sponsors. Staff and freelance reviews are typically written based on time spent with a retail review copy or review key for the game that is provided by its publisher.