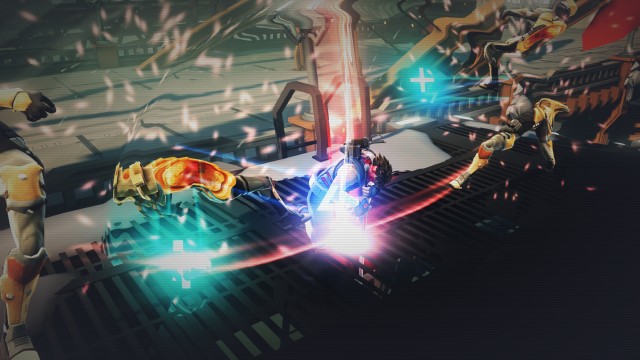 Taking an active, critical interest in video games means that I play more of them now than I ever have before, and an unfortunate side effect is that when I'm punching through a couple of new games every week, it takes more for one of them to stand out, even if it's quote-unquote "good." Case in point: I played the new Strider less than a week ago and was rightly hooked from beginning to end, yet now I can barely remember anything about it. This, to me, is the mark of a game with no higher ambition than to get the job done.

The problem, I'd suspect, is that Double Helix  a developer that has become reputable out of nowhere within the last year  put top priority on preserving the aesthetic and atmosphere of the original arcade game, which just recently hit its 25th birthday. That's five generations. That's a mass of artistic advancements being shrugged off all in the name of being "retro," and sure enough, entirely too much of Strider feels more out of touch than endearing. Here's a generically "cool" ninja protagonist who runs without moving his arms for some reason. Here are your bog-standard military bases and robot factories and the like. Here's an evil regime fronted by one-dimensional villain archetypes  and they're all voiced now, with exactly the novelty accents you'd have read their dialog with in the old days.

That shouldn't matter if it's fun, though, right? If you'd have asked me a week ago, I'd have assuredly said "yes." The new Strider is a Metroidvania affair, and so uses a formula that I've developed quite a weakness for lately. It pulls off the basics pretty well, too  as your arsenal grows, you develop a fuller understanding of how to navigate Strider's somewhat open-ended world. You can pretty much always return to an area that you've already cleared and find something that was previously out of reach, whether it's behind a locked door that you can now open or across a large gap that you can now clear with a triple-jump. And when you're facing a tough boss and those boosts in health and energy mean the difference between a victory and a death, the exploration feels validated.

So that's good, and Strider has a neat little bonus in that the main character can scale any wall right out of the gate. I recently replayed Metroid II: Return of Samus, and one of my few positive takeaways was that the Spider Ball, an ability that most developers would save for the endgame, was available right from the start. It's cool because it spurs exploration on the players' part and challenges the designers to contrive more intricate ways of actually containing them. Same thing with Strider; since Hiryu can climb virtually any wall from square one, our means of outwitting Kazakh City's security must involve more intricate means of navigation than simply leaping over things. And it does  there's some really innovative reflex-based stuff here.

That's ideal for a platforming-centric title. Unfortunately, Strider is also a combat-centric title, and the two do not mesh. Hiryu is a ninja, which in video game terms translates to dashing about, deflecting bullets with your sword and striking down entire roomfuls of soldiers in seconds flat. It's exhilarating when it works, but since Hiryu wants to cling to every surface that he comes within a foot of, much of the time that should be spent slicing through enemies will instead be devoted to navigating planes. Rounding corners is a particularly nasty and imprecise affair.

This leads me to arguably my biggest complaint about Strider: it's a 2D reboot of a retro action series originating in the late '80s, and there is no d-pad control. Hiryu can only be directed with the analog stick, while the d-pad is relegated weapon-selection duty. I cannot wrap my mind around why Double Helix thought this would be a good idea. Playing a game like this  which often requires rigid movement and swift offensive maneuvers, often simultaneously, in a 2D playing field  with a thumbstick just feels wonky, flimsy and ineffectual.

That'd be an easier speed bump to clear had Strider been any more distinctive in tone, but when I think back to my time spent with the game, my recollection is a mass of blue, metallic environments full of tanks and lasers and bosses with easily-read area-of-effect attack patterns. Even the basic design adheres a bit too closely to Metroid to feel like its own thing, going so far as to color-code locked doors with Hiryu's sword upgrades. Hell, once you figure out that one of the Cypher modes does explosive damage, the other three just start feeling like glorified key cards. That doesn't take away the reward of uncovering hidden goodies in areas you thought you were finished with, but it does make the process less memorable.

Maybe it's just terrible timing that Strider launched so soon after Guacamelee!, a similar game that happened to sport a genuinely unique aesthetic on top of smoother platforming controls and more refined combat. That's a testament, however, to the fact that even a well-worn formula can be fashioned into something enduring and, conversely, just how homogenous that same formula can feel when there's so little inspiration behind it. The expanding-world sensibility of Metroidvania isn't an easy thing to pull off, and it kept me engaged in Strider, but in stark contrast to its namesake, no one will remember this as a classic. I sure did love it a week ago, though.

If you enjoyed this Strider review, you're encouraged to discuss it with the author and with other members of the site's community. If you don't already have an HonestGamers account, you can sign up for one in a snap. Thank you for reading!

© 1998 - 2022 HonestGamers
None of the material contained within this site may be reproduced in any conceivable fashion without permission from the author(s) of said material. This site is not sponsored or endorsed by Nintendo, Sega, Sony, Microsoft, or any other such party. Strider is a registered trademark of its copyright holder. This site makes no claim to Strider, its characters, screenshots, artwork, music, or any intellectual property contained within. Opinions expressed on this site do not necessarily represent the opinion of site staff or sponsors. Staff and freelance reviews are typically written based on time spent with a retail review copy or review key for the game that is provided by its publisher.