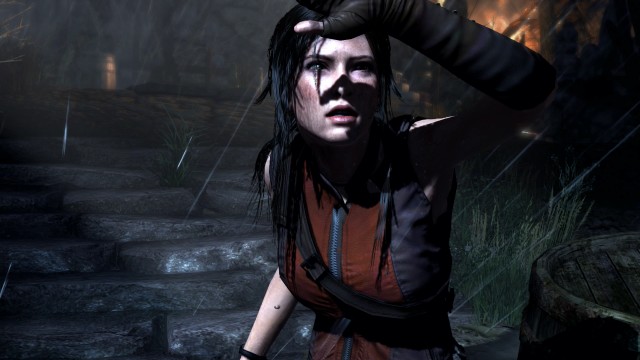 There's been some ambiguity recently regarding Tomb Raider: Definitive Edition and just how "definitive" it is. The announcement of this new-gen (I'm not comfortable calling it "current-gen" yet) rerelease of one of last year's most critically acclaimed games initially felt hurried, and charging full price for it doesn't help  the game's been around for long enough that anyone who's interested in it has likely been able to pick it up for relatively cheap, but it's also fresh enough in everyone's minds that we're not really thirsting for a revisit yet without some serious incentives. Also not helping were early reports that the Xbox One version of this reissue would be locked at 30 frames per second despite this technically being a last-gen game  an abnormally pretty one, I'll grant you, but nevertheless.

Xbox One is the console that I wound up playing Definitive Edition on, despite my wishes otherwise, and I can confirm that this version runs no higher than 30fps. I won't act like that's not acceptable. 30fps has been the console standard for a while now, and it looks fine. But if Square Enix and Crystal Dynamics want to repackage a last-gen experience and sell it for the price of a new game, it's kind of disappointing that we're getting little more than a slightly higher resolution and a remodeled main character. In fact, the new Lara may be to blame here. 90% of her is as indistinguishable from reality as a video game character has ever looked, while the other 10% is powered by TressFX, the wonky hair physics engine that was a notorious bane to processors on PC. Despite the technology behind it, all it really does is make Lara's hair look stringy, turn blonde in certain lighting (!?), and move as if propelled by some unseen third party. Frankly, I'd take a high framerate over this any day. 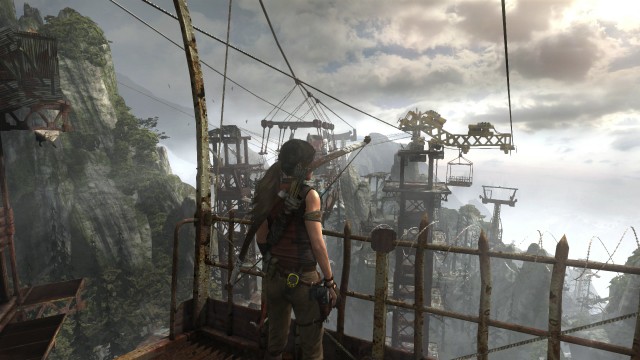 I have not tried the PS4 version, but I'm led to believe that it runs at a relatively consistent 60fps, which means that the only benefit to playing it on Xbox One is Kinect functionality. Well, "benefit." None of the game's voice or motion commands are used to perform actions that couldn't be performed with the press of a button or the tilt of an analog stick with considerably more convenience or reliability. What's more is that my Kinect kept picking up voices from the TV itself, and I had to turn the sensor off when one of the NPCs said something that sounded like "pause" and prompted the game to pause with no input from me. But yes, Microsoft. Please keep packaging the Kinect with every Xbox One and charging $100 more for this thing than your competitor's console... the one that can apparently run the same game at double the framerate.

I'm straying from the point, but can you blame me? Aside from the visual upgrades, Definitive Edition's expanded single-player content consists of a handful of alternate costumes for Lara and exactly one extra tomb for you to explore near the beginning of the game. There's some multiplayer DLC thrown in here as well, but none of it makes the mode any less derivative in a climate absolutely thick with games more tailor-made for the sort of online deathmatch frenzy that Crystal Dynamics tried to make here. The shortage of extras makes it difficult to recommend this reissue to anyone  not the newcomers who could get a slightly-less-gorgeous version of Tomb Raider elsewhere for considerably less money, and certainly not to those who've already played it and would be paying full price for such an insubstantial upgrade.

But one way or another, Tomb Raider is worth playing, even if you're not a fan of the series. Especially if you're not a fan of the series. It takes only the barest basics of what made the Tomb Raider franchise successful, applies them to an exploratory Metroidvania sensibility, and fits it with a reinvented Lara Croft who's a stranger to this brand of adventure but quickly realizing that she's quite good at it. She's a fitting metaphor for the series' bold, gritty new direction, then. 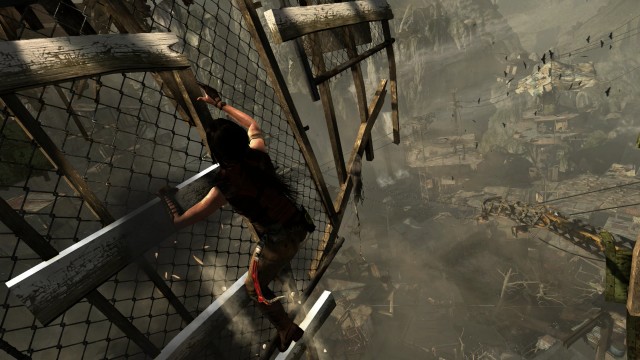 Gary's glowing review of the original rather eloquently transcribes my own thoughts on the game, enough so that I never bothered covering it myself. To contrast, I'll add that while the game has been out for less than a year, replaying it has underlined how much it's already starting to age, how many hackneyed devices of modern game design it employs. I can tolerate Tomb Raider's overreliance on quick-time events since they're at least moderately well-implemented, and the game's cover system feeling somewhat imprecise can lean on the excuse that Lara not being a hardened killer yet is kind of the point. What really clashes with the whole production, though, is the overuse of Uncharted-style set pieces. I can buy into Nathan Drake darting through collapsing buildings and hanging from bridges because he exists on another plane, one in which a person can survive terrifying, near-death experiences and still crack snark with perfect hair. Lara, though, is human, and Crystal Dynamics have spared no expense in depicting the grueling physical punishment she's forced to endure in borderline gratuitous detail. So having her conquer over-elaborate sequences of destruction with superhuman gusto makes no sense.

One completely over-the-top sequence sees Lara getting caught in the current of a raging river, dangling from a plane wreck that's teetering over a cliff, surviving a parachute malfunction in midair and falling several stories from a very tall tree. She does all of this in the span of two minutes and survives with little more than a conservative laceration to the gut. It's practically a cartoon until we get the deliberately visceral follow-up scene in which a blood-covered Lara cauterizes the wound with a red-hot arrow. That kind of juxtaposition screams tonal inconsistency.

In fact, while Tomb Raider is big and sprawling, it's also just a bit messy and unfocused, with so many must-include mechanics thrown together that not all of them make sense or feel fully developed. The stealth is both criminally underused and more or less broken, and while the RPG leveling is fun to indulge in, it also reeks of narrative disconnect. How is it that hunting a deer leads Lara to develop a padded stock for her rifle? What was that deer eating? 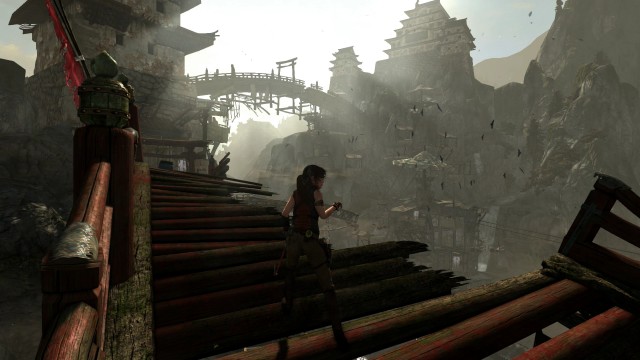 Yet all of these conflicting design decisions are worth putting up with for the game's real draw, which is Yamatai itself. That's the name of the island that Lara and company find themselves stranded on, and it will be remembered alongside Tallon IV and the Black Mesa Research Facility as one of those settings that's just as integral a part of its game as any of the characters or mechanics therein. It's a marvel of visual design, with sinister-looking mountains and towers jutting up from the landscape like fingers physically entrapping you, but even more importantly, it adheres to the very Metroid-like design philosophy of offering an overlapping, almost nonlinear world that opens up as your inventory expands and you develop a deeper understanding of how to navigate your surroundings. Oh, that's how you climb those particular walls. Oh, that's what those posts are for.

Tomb Raider is the rare game that I would describe as "organic," and yes, being able to appreciate the visual enhancements to an already gorgeous game in 1080p is a new thrill. I'd even go so far as to say that Definitive Edition looks at least as good as most of the dedicated new-gen releases on the market right now, and whichever console you choose, this is probably the best version of Tomb Raider that'll ever be available. Whether or not that's worth $60 is up to you. I don't believe that it is, but replaying Tomb Raider and being compelled to achieve 100% completion all over again reminded me that, one way or another, this is a game that everyone needs to check out.

If you enjoyed this Tomb Raider: Definitive Edition review, you're encouraged to discuss it with the author and with other members of the site's community. If you don't already have an HonestGamers account, you can sign up for one in a snap. Thank you for reading!

© 1998-2021 HonestGamers
None of the material contained within this site may be reproduced in any conceivable fashion without permission from the author(s) of said material. This site is not sponsored or endorsed by Nintendo, Sega, Sony, Microsoft, or any other such party. Tomb Raider: Definitive Edition is a registered trademark of its copyright holder. This site makes no claim to Tomb Raider: Definitive Edition, its characters, screenshots, artwork, music, or any intellectual property contained within. Opinions expressed on this site do not necessarily represent the opinion of site staff or sponsors. Staff and freelance reviews are typically written based on time spent with a retail review copy or review key for the game that is provided by its publisher.