Christ, where to start...

This review is late. It's late because I was set to finish this game a good week ago, but made a bad decision and important parts of my army died. They didn't die on the battlefield; they died directly because a bad call I made hours previously came back to haunt me. I remember sitting here, blinking in disbelief as the text scrolled across my screen describing the death of my kinsmen, how they fell to traitor blades and that there was nothing I could do to change this. They were simply.... gone. I couldn't have that - it just felt wrong - so I abandoned my almost complete playthrough and I started from scratch. I tried to make more informed decisions. It didn't matter. People still died and it was still all my fault

The Banner Saga is many things, but above them all, it's ruthlessly grim. Rook is a simple hunter from a small, forgotten village tucked away in the middle of a vast woods, but his role in life unexpectedly changes within a snatched moment of panic. Massive rock-formed giants called dredge effortlessly raze the village, giving the people within no choice but to flee. Still, people die; the old, the weak and the too young mostly, and Rook finds himself in charge of a gathering of scared, tired folk. Escaping the village and heading towards what he hopes to be safety, he's approached by a band of well armed strangers who seek safety in numbers. The caravan, still in grief and still shocked from the loss of their homes, are not yet ready to trust people they do not know, but the band claim to be hunters. If you let them join, they would swell your supplies and the extra rations you receive would doubtlessly save lives. Still, if they decided instead to betray you, what few warriors exist within your ranks are weary, wounded, tired from fighting a foe well beyond their means. They would struggle to resist an attack from within. 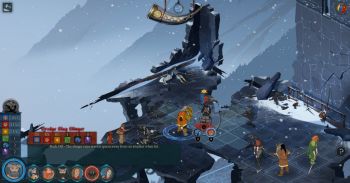 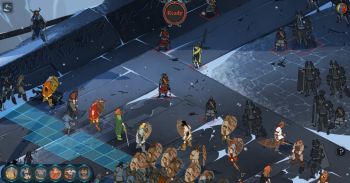 If you turn them away, people will starve and die. If you let them join, resentment will grow as you invite in an unknown danger. There's no immediate right choices, there's only consequences for doing what you feel is right at the time. These choices don't always blow up in your face; sometimes a band of hunters looking for a pocket of safety is just that. Sometimes, they might fester in your ranks for weeks before deciding that they could do better on their own, slaughter the guards safeguarding your supplies, and vanish into the night.

Later, a sizeable slice of your warriors will come to an old track that leads to a village in similar size to yours. They want to splinter away in the hopes of finding kin still alive. You can forbid them, ordering them to abandon friends and family alike. Moral will plummet, resentment will grow. If they decide to go off on their own anyway, you don't have the manpower to stop them. On the other hand, if you let them leave, you know you're almost certainly sending them to their death. Perhaps they'll catch you up with reinforcements later, but, odds are, you'll just throwing away a good portion of your warriors and whatever supplies they take with them.

The Banner Saga presents you with a world where the gods have died and the sun has vanished, and simply asks you to survive. There's no rallying against the big evil; there's simply trying to make it to the next town with as many of your people alive as you can manage. The dredge swarm across the land, putting everything to sword in an almost desperate, crazed rush, and it's your job to try to stay one step ahead of them. It's your job to keep everyone you care about safe. You will fail at your job. 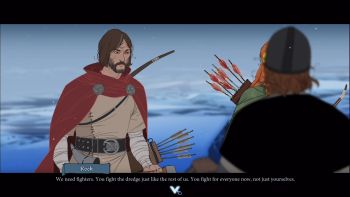 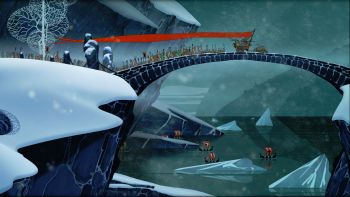 Part turn-based strategy, part caravan simulator (think Oregon Trail with axe-wielding twelve feet giants sporting twisted horns from their foreheads) The Banner Saga entwines every aspect it advances into the overall thread. The battles you undertake happen on a turn-based grid, but often revolve around weakening your foes rather than running through them. Dredge make up your main targets, but are made of stone, so need to have their armour chipped away at before you can start dealing major damage. However, their health points also double as their attack strength, so slicing them up directly makes them less of a threat. Winning battles grants you Renown, which you can spend to promote your warriors, but is also deviously employed as currency. Upgrade that archer, and perhaps you won't be able to purchase enough food for the next voyage. Spend too much Renown on armour and supplies, and your forces may become woefully under-levelled and ripe for slaughter.

Your warriors won't die in battle, rather they will become injured, meaning that putting them back into battle carries a stat penalty. You can speed up their healing by resting, which will also restore moral, but eats up supplies. Run out of supplies, you starve. And die.

There's absolutely no certainty to be had in The Banner Saga; there's exactly no right choices that lead to a happy ending, and this runs throughout every decision and choice you make in your journey. Every time you're called on choosing how much food to purchase, which path to travel, when to fight and when to flee -- it's haunting. The game does away with manual saves, check-pointing your journeys at set points so, if a wrong decision is made, you need to reload a file sometimes several hours back. But you will. I went right back to the start; I thought I could save them all. I couldn't. 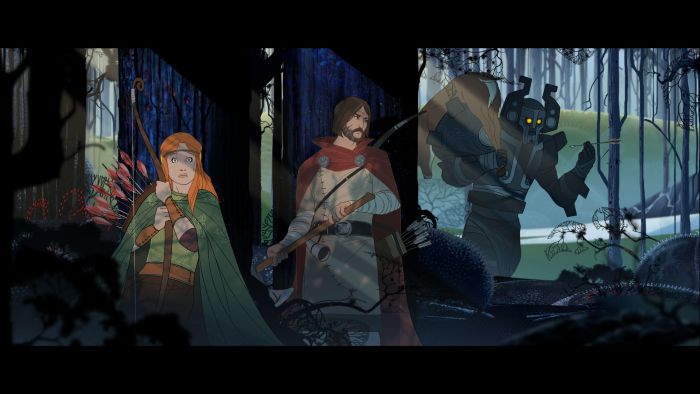 Even if you know which pitfalls to avoid, hindsight can't save you from the grim realities Banner Saga lays at your feet. Its beauty is almost misleading; set against whispering symphonies composed by Journey's Austin Wintory and with an animated art style openly inspired by early Disney films illustrated by Eyvind Earle, the subtle allure of the title belies the suffering it hides underneath. You crawl through your own mistakes to reach the next layer of misery, and hope you have enough left to carry on.

My second playthrough is complete. I didn't do great -- I still feel pretty awful about some of the things I've had to do, the sacrifices I've had to make. People died, but the world is ending, and the sun has vanished. The Banner Saga offers you the chance to survive; it just doesn't make it easy. But I'm ready to do it all again. I hope I can do better. I know I won't.

If you enjoyed this The Banner Saga review, you're encouraged to discuss it with the author and with other members of the site's community. If you don't already have an HonestGamers account, you can sign up for one in a snap. Thank you for reading!

© 1998-2021 HonestGamers
None of the material contained within this site may be reproduced in any conceivable fashion without permission from the author(s) of said material. This site is not sponsored or endorsed by Nintendo, Sega, Sony, Microsoft, or any other such party. The Banner Saga is a registered trademark of its copyright holder. This site makes no claim to The Banner Saga, its characters, screenshots, artwork, music, or any intellectual property contained within. Opinions expressed on this site do not necessarily represent the opinion of site staff or sponsors. Staff and freelance reviews are typically written based on time spent with a retail review copy or review key for the game that is provided by its publisher.