Omitted for the sake of some sense of brevity from the already lengthy title of Unearthed: Trail of Ibn Battuta - Episode 1 are the magical words Gold Edition. You see, early last year, this title was given limited PSN release for curious PS3 gamers across Europe to try, and it was universally slaughtered. It was deemed a buggy, boring, unoriginal mess of a game that desperately wanted to be Uncharted so much it picked a title only a couple of letters removed from it. In most cases, we would point out the worst of these errors, all have a good laugh, and that would be that.

However, Unearthed rallied. Claiming to take all the criticism on the chin, and after quietly dropping any references for a XBLA release, the title stealthed its way on to Steam. It had its Gold moniker now and it had notes from the developers listing all the fixes that had been made. Maybe an awful initial release was just what this game needed; maybe now that it was torn down to its foundations by its critics, it could be built back up. Hydrophobia did just that and turned out to be a serviceable little game... just before developers Dark Energy Digital went out of business. That's not a bad omen, right?

In comparison, serviceable seems to be the most appropriate word when talking about the revamped Unearthed. The game runs fine; it's surprisingly well voiced and more or less gets you from A to B. Sure, every now and then enemies will literally appear out of nowhere, which is inconvenient, and sometimes dropping down from a higher level will leave the protagonist walking on a bed of air several feet about the ground. But these things don't actually stop the game from progressing.

In fact, it's very easy to get from beginning to end of Unearthed. The game is less than an hour long, yet still asks you to download a sizeable 5GB file. 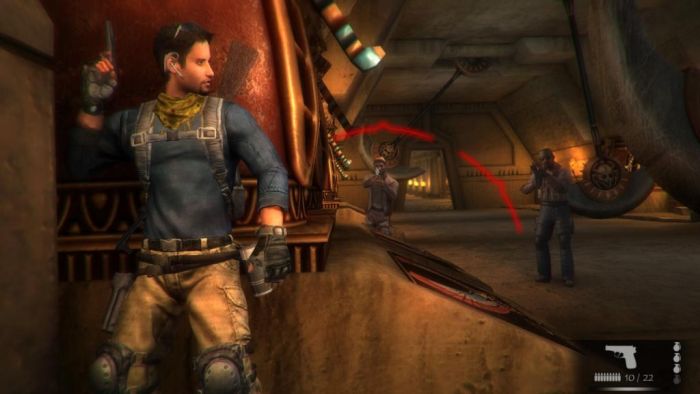 Why such a large file? I'm not sure, but would guess because Unearthed wants to cram its short lifespan full of everything. The first chapter that acts like a tutorial has you walking down a linear set of office corridors gunning down suited thugs with a clumsy take on cover based shooting. Using the tried and tested WASD for movement, Unearthed makes the puzzling demand that you use keys contextually mapped for the starting letter of each action you want to undertake. As such, hitting C for Cover and E for Examine isn't that big a deal as they're right there by the WASD block, but pressing G for throw a Grenade or T to perform a Takedown just feels weird. Still, that feels brilliantly natural when compared with the game's awful melee engine which has you punching and kicking with the mouse buttons whilst throwing up an ineffectual block by pressing down the wheel.

This stage will take you 15 minutes to complete.

The next chapter sees you explore a forgotten ruin. This offers the game's first chance to showcase the fact that characters read reasonably well written lines about their quest and slices of history focused on the journey of Ibn Battuta while jittering around like marionettes being controlled by a puppeteer in the midst of the epileptic fit. Throw in a few groanworthy meta references to Tomb Raider and Uncharted, threaten the fourth wall a bit, then its on to the actual exploration where you need to unlock a giant door thats outsmarted explorers for centuries. You do this by finding four plates that are cunningly hidden in plain sight. If you are unable to spare the seven minutes or so it would take to search these items out, you can just press TAB to get some hints. By hints, Unearthed means supplying you with an exact snapshot of where the item is.

SPOILERS: Two of them are in pots you need to walk past to look at the door. 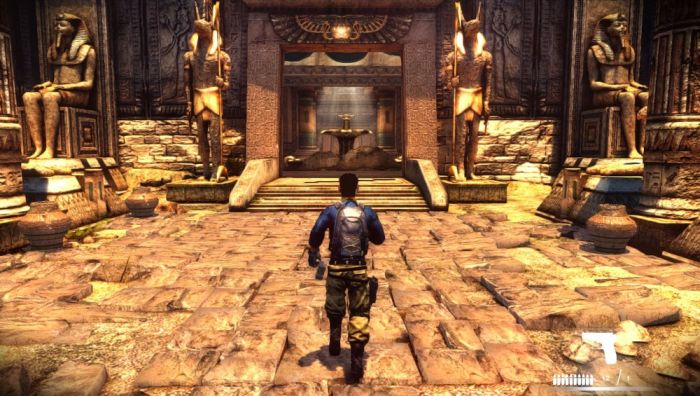 You solve a few puzzles, one involving the most awkward excuse for an RC car segment since great success Duke Nukem Forever did it, and then fight your way back out the way you came. The gunplay remains clumsy, and, just as you figure the worst is behind you, you have another one-on-one fight where you click the mouse's punch button like crazy and just wish it will all end. It feels longer, but the entire thing is probably about twenty-five minutes or so.

After that, Unearthed does its best to showcase its diversity. You have an on-rails stage where you sit on the back of a quad bike firing an machine pistol with infinite bullets, and a chase section where you have drive around a constantly-repeating circuit of looping roads to escape police cars that show very little interest in pursuing you. There's a parkour level where you'll have to sometimes turn a corner and press jump. As a reward, you can partake in another awful bout of fisticuffs, then escape a deadly sniper by strolling slightly to your right. My favourite stage, though, is the entire chapter that's taken up by following two people around a middle east marketplace on your way to a tea shop. You then bicker about what you're going to order for ages, finally order your drinks, then leave the shop seven seconds after the order is placed without drinking anything. Chapter over.

Unearthed: Trail of Ibn Battuta - Episode 1 is not a great game. As is often the case, its inherent awfulness has been exaggerated by us hack video game writers in an attempt to deliver an amusing bash review, but it's still consistently awful in every area it wants to touch. And, because it has an unnatural hard on to be indie Uncharted, it wants to do a little slice at everything. So, for a brief glance at bad driving, rail shooting, melee combat, exploration, puzzle solving, parkour, platforming, cover-based gunfights and stealth, Unearthed is a fair case study.

Oh, did I mention that taking the hour out to beat the game unlocks survival mode, which is a horde rush set against zombie foes? Because facing undead waves hasn't long become dangerously obligatory at all.
1/5

If you enjoyed this Unearthed: Trail of Ibn Battuta - Episode 1 review, you're encouraged to discuss it with the author and with other members of the site's community. If you don't already have an HonestGamers account, you can sign up for one in a snap. Thank you for reading!

© 1998-2021 HonestGamers
None of the material contained within this site may be reproduced in any conceivable fashion without permission from the author(s) of said material. This site is not sponsored or endorsed by Nintendo, Sega, Sony, Microsoft, or any other such party. Unearthed: Trail of Ibn Battuta - Episode 1 is a registered trademark of its copyright holder. This site makes no claim to Unearthed: Trail of Ibn Battuta - Episode 1, its characters, screenshots, artwork, music, or any intellectual property contained within. Opinions expressed on this site do not necessarily represent the opinion of site staff or sponsors. Staff and freelance reviews are typically written based on time spent with a retail review copy or review key for the game that is provided by its publisher.