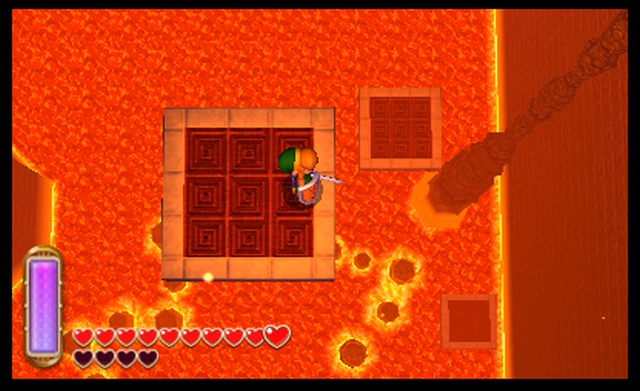 We saw this once already. The last time Nintendo took Zelda in a bold and divisive new direction  with The Wind Waker  it undersold, prompting the company to backtrack and pander to its fans with a transparent follow-up to Ocarina of Time. Now, they've spent three straight entries toying around with unorthodox control inputs and seem to have learned their lesson when a game that forced players to blow into a microphone every time they want to use a major item (lo and behold) didn't move many units. So they've ditch the hardware gimmicks and are now milking nostalgia for the second-most-popular title in the series, A Link to the Past. The difference is that this time, I'm not buying into it.

Regardless of what I'm about to say, A Link Between Worlds is probably the best Zelda game of the last decade, but that no longer means much. It sticks to what it knows will work, which is kind of what we needed right now, but the asterisk at the end of the paragraph is that Worlds just isn't interesting. Twilight Princess was also exactly the title we needed at that particular moment, but nowadays, I barely remember anything about it.

The kicker, for me, is that I'm one of the few Zelda fans who wouldn't rank Past as one of the best of the series. I've always seen it as more labyrinthine than complex, stuck in an awkward middle ground between the NES original's emphasis on blissful exploration and the later games' focus on mind-bending puzzle design. That Worlds is a point-for-point retread of the themes and arcs introduced 22 years ago (and later refined to a cinematic sheen in Ocarina) dampens the impact even further. It's got the same map, the same structure, and even more or less the same story. Clear three dungeons, defend Zelda from evil warlock. Travel to dark world, rescue seven sages, save Zelda from giant pigman.

Oh, and remember how the sages in Ocarina were all characters that you knew in your childhood, and it was kind of cool to look back knowing that the people subtly pushing you about were actually guardians of the universe or whatever? Worlds tries to do that, too, except that the characters in this version of Hyrule are all underdeveloped and forgettable. Hey, look! The guy who gave you the Power Gloves is the sage of the Ice Ruins! What a coincidence! 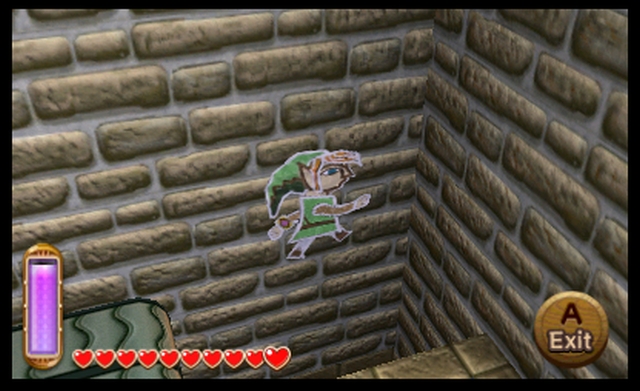 I'm being negative. Worlds is perfectly fine in most ways, and even a much-desired return to form in one particular aspect: exploration. It's been a frequent criticism that the more recent Zelda titles have felt a bit too segmented in design, a trend that peaked with Skyward Sword, in which the overworld was just a blanket of dead space that served no practical purpose and was completely disconnected from the areas of the game in which you're actually called upon to, y'know, do stuff. Worlds doesn't have that problem. Its overworld is, in many ways, just as intricately designed as the dungeons that fill it. It's no longer an empty time sink; it's a puzzle in and of itself.

Here's an example. One of the first dungeons in the game is in the middle of a lake, accessible only by water. Link can't swim by default, so you need a pair of flippers to get to the island. To obtain them, you have to visit Zora's Domain on the opposite end of the map. How are you supposed to know that? You don't. You just need to... figure out it. You need to realize that the only way to reach the dungeon is to learn how to swim, you need to explore Hyrule thoroughly, and you need to discover that a race of water-dwelling people live in the northeast corner and can probably help you out with that. Worlds is nice enough to mark every dungeon in Hyrule with an "X," but leaves players to work out how to actually reach them. It's cool.

The game's pretty open-ended, too  with a handful of exceptions, you can go essentially anywhere you want from square one and tackle the dungeons in the order of your choice. Adding to this freedom is the fact that most of the game's key items are available for rental right from the start, from a strange bunny hood-wearing fellow named Ravio. Each dungeon tends to be based around a specific piece of equipment, made clear upon entry. Turtle Rock, for example, requires the ice rod, and as such, you can only access it by using the rod to cool the lava pit surrounding it. Items cost money to rent, and you supposedly lose them whenever you die, though this is a modern Zelda game we're talking about, so I never had to worry about that.

It's a unique structure for a Zelda game, but it poses a couple of problems. For one thing, it means that dungeon design tends to be pretty predictable, since it wouldn't be fair for a puzzle to require the use of the hookshot when there's no guarantee that players even have the hookshot at that particular moment. It also means that Worlds is somewhat lacking a sense of discovery, since most items are available from the outset and it's clear at the start of every dungeon which one you'll be using. That your equipment set mostly just pulls from the Zelda checklist  bombs here, a boomerang there  doesn't help. The worst problem, though, is that the freedom in approach comes at the cost of pacing, consistency, or difficulty curve. The dungeons are wildly uneven in terms of length and difficulty, and they come and go systematically, with no momentum, no sense of progression. The game doesn't flow; the skills acquired in one area have no affect on your ability to complete the next area. 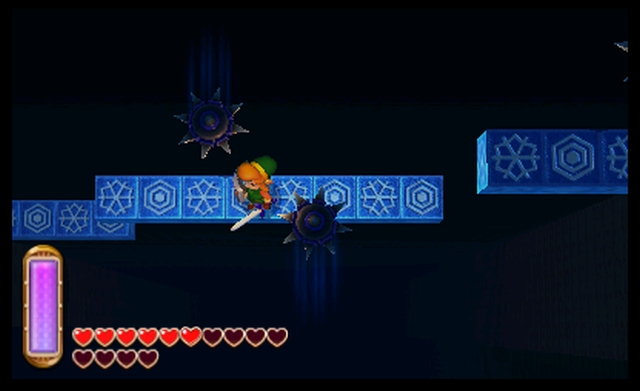 Now, on one hand, there are a couple of high points. One dungeon, the Ice Ruins, easily ranks among the series' finest moments. Measuring six floors and suspended over a seemingly bottomless chasm, this masterpiece of a dungeon has you tiptoeing over narrow walkways, moving massive chunks of the environment around and solving puzzles that frequently span multiple levels. It's also arguably the best use of 3D I've yet seen on the system, since Worlds digs new tunnels from having the ability to perceive depth from a top-down perspective.

There are a few more heavy-hitters, too, including a obligatory dungeon based around raising and lowering water levels, and one that has you creating pillars of sand (one of the game's precious few unique moments). They're counterbalanced, however, by most of the game's dungeons, disappointingly, being over in a flash. It could be due to the fact that you're no longer spending half of your time searching for the important item of the moment, but whatever the case, Worlds is, for the most part, quite easy. And depending on the order in which you tackle the dungeons, it may get easier as it goes.

It could have been elevated by something really unique, like how the time- and season-changing mechanics in the Oracle games lifted them beyond what should have been cut-and-paste Zelda (from an outside developer, no less). The big feature in Worlds is that Link can now turn himself into a painting and move within 2D spaces, but while it's a neat ability, it's essentially just a traversal gimmick, mainly used to fit through cracks or cross gaps. I like the unusual emphasis that Nintendo puts on platforming here, but what you're actually doing never actually feels as transformative as, say, getting the dual clawshots at the end of Twilight. Slipping through spaces and crossing chasms are things I've already done in countless Zelda games; slinging myself from wall to wall like Spider-Man wasn't.

It probably sounds like I'm nitpicking, and truth be told, after revisiting Skyward Sword earlier this week, I'll happily take a "safe" Zelda over that confused mess any day. Worlds hosts a couple of terrific dungeons, has a weirdly touching finale and is generally fine, and maybe for some people  especially those particularly nostalgic for Past, who are clearly the target audience here  that's enough. But Worlds lives in the shadow of better and more important games, which makes its shortcomings all the more visible. And personally, I'm still waiting for that remake of Majora's Mask, if only to be reminded of one of the few times in which Nintendo took a risk with this series (or, more specifically, a risk that actually paid off). The comparison to Twilight wasn't made in vain, as I predict that Worlds will travel the same road: moves units, gives us what we "want"... and is quickly forgotten.

P.S. The dark world, this time around, is called "Lorule." Get it?!