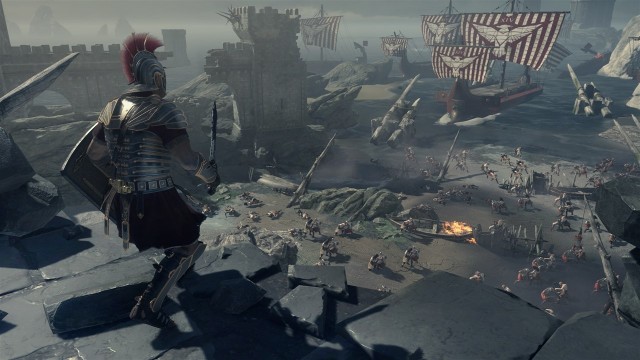 We all pretty much made up our minds about Ryse: Son of Rome long before the game was released, and that's kind of a shame. That's not to say that the final product has exceeded my expectations  it barely has  but it's an original franchise by a relatively renowned development team set in a time and era not often explored from the angle of a character action game. That really underlines how well Ryse ideally should have been received, and how much Crytek messed up when it chose to waste so much of the game's potential on the usual trappings of modern design: linear, set piece-driven sensibility, and overemphasis on quick-time events and a staggering supply of freaking turret sections, of all things.

How are there even turret sections in a game set during the Roman Empire? Its because they had ballistae back then, you see. Ballistae that apparently possess the approximate fire rate and accuracy of an M2.

Ryse is simplistic and short, which is better than simplistic and long, I guess. It's also awfully over-reliant on novelty segments, in which protagonist Marius leads phalanxes against archer fire or holds off attacking barbarians with explosive barrels, because yes, we're shoehorning those into our Roman Empire game, too, apparently. I've always seen this sort of thing as a show of no confidence, since a good game should be able to carry itself without gimmickry, and at no more than six hours, it's not like Ryse has a lot of time to fill. 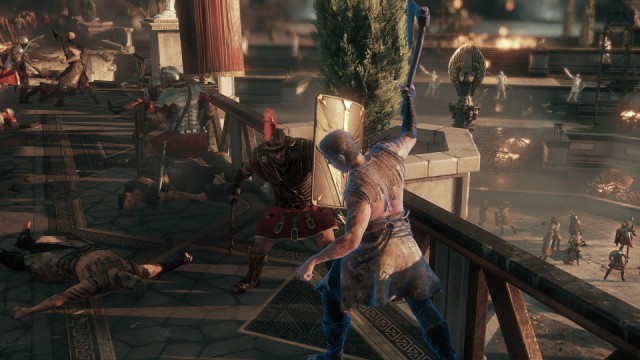 Surprisingly, though, the core combat is actually quite solid, if somewhat repetitive. It's a two-button affair, dividing attack duties between a damaging sword slice and a guard-breaking shield bash, supplemented with an execution move and an area stun attack that looks and functions quite similarly to the Devil Trigger seen in this year's DmC. There are only "combos" insofar as you're encouraged to alternate between X and Y presses so enemies don't begin predicting (and thus dodging) your attacks, and rather disappointingly, the game's intimidating-looking skill tree consists pretty much entirely of stat upgrades with no new moves whatsoever.

What makes Ryse's combat quite unlike that of any other recent character action game is that it's heavy and  this is the key  slow. Enemies readily broadcast their attacks, but Marius isn't Bayonetta. He can't move quickly and he can't block while he's in the middle of a sword swing. I played Ryse only on higher difficulties, and for all I know, it's entirely possible that players unwilling to challenge themselves can clear the campaign by simply absorbing damage and hammering mindlessly through the barbarian hordes. For me, however, beating Ryse wasn't a matter of chaining combos, but rather a process of looking for openings amidst sweaty-palmed defensive maneuvers. And while the enemy types are fairly limited, it's nice that they each require unique procedures to take down.

It's also quite a brutal affair: throat-slitting, curb-stomping, limb-dismembering, the whole enterprise. So while Crytek was overly eager to embrace quick-time-event-heavy finishers, at least the violence delivers on a raw, visceral level. It's all very satisfying to look at, and to know you're responsible for it. 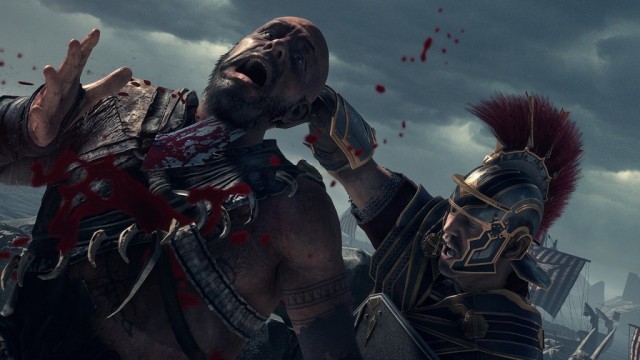 On the other hand, gee, there are a lot of quick-time events in this game. I really do think that Crytek was onto something by color-coding objects to corresponding buttons on the Xbox controller, and in some cases it's intuitive, such as when a blue aura marks an object that you need to chop through, or when an enemy emits a red glow to indicate that he's about to use an attack that you'll need to dodge, rather than block. That's all fine. But Ryse caught a lot of heat around E3 for its overuse of reflex-based button prompts, and replacing said button prompts with color codes relating to the same buttons... doesn't actually change anything, Crytek, I'm sorry. You don't really need to partake in the quick-time events, but executing them properly awards much-needed experience boosts, so you'll need to choose between either getting sick of finishers or being severely underpowered.

On the subject of mechanics that are rarely required but don't do Ryse any favors, the ability to throw pilums is clumsy and feels like a half-baked attempt to make ranged combat a possibility. The quick-throw attack doesn't work half of the time and successfully hits enemies even less, and manually targeting takes ages, which you don't have when you're under heavy archer fire in a game with no cover system. Again, you almost never need to use pilums, but that makes you even less prepared during the handful of sequences in which you actually do.

Also on the subject of poorly-implemented novelties: voice commands. You can occasionally give context-specific orders to your troops to fire catapults or provide archer support, and Crytek encourages you to do so by shouting into your Kinect. If you don't want to do that, you can issue the same command by holding down the left bumper... for something like five or six seconds before it registers. During a couple of particularly heated segments, any delay is unacceptable, and the unbearable wait in using the left bumper is a hideously transparent attempt to make the Kinect more relevant to hardcore gaming. I don't mind using voice commands, but not when they're this unfounded. 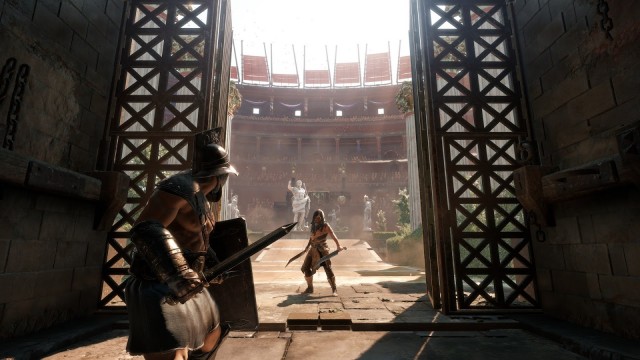 Thankfully, the cooperative multiplayer actually makes shockingly good use of Ryse's core combat, while pushing aside most of the gimmicky nonsense that repeatedly drags the campaign down. It's essentially just an endurance mode that has you cutting through waves of enemies and completing the occasional objective, but it strips the raw battle system to the bare essentials, and does so in the perfect setting: the Colosseum. Engaging in gladiatorial combat of this scale is exhilarating partly just for the grandiosity of the experience, and partly for the visual spectacle of the arena's dynamic environments, with new obstacles  buildings, traps, whatever  constantly rising out of the floor around you.

Ryse looks incredible, by the way. I scoff at anyone who says that the graphical gap between the old consoles and the new ones is too small, because it seems like every next-gen title I play supplants the last one as the best-looking game I've ever seen. First it was Killzone: Shadow Fall, then it was Forza Motorsport 5, and now it's this. Characters are modeled with absolutely exquisite detail, and the environments are varied, colorful, and brightly lit. A forest level in the game's first half is as indistinguishable from reality as a game has yet come for me. Xbox One is an expensive machine, but it's unreal what this thing is capable of. 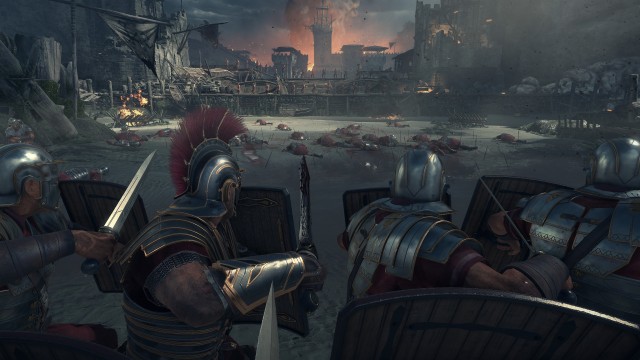 That's expected, though, from Crytek. What's not expected is that Ryse's story is actually pretty damn cool. If you can accept that the writers make no attempt whatsoever at historical accuracy, what begins as a generic Gladiator-lite revenge tale turns into something far more engaging by its second half: stylishly told (get a load of this animated sequence detailing Marius's ancestry), full of delicious twists and unafraid to engage in pure fantasy when it's called for. I particularly enjoyed the idea of the Roman gods repeatedly showing up to manipulate things behind the scenes, and players are frequently trusted to put details from the story's out-of-sequence timeline together without much assistance.

It's also got some of the best motion capture work I've ever seen in a game, which gives the actors more room to shine than they're usually afforded in this industry. It's still somewhat rare for me to praise voice work in games, and far rarer still for me to praise the physical performances underneath. In Ryse, though, movements and expressions are captured impeccably. Not only does it help the actors sell their characters  you will really want Nero's sons dead  but it makes the game even more convincing and lifelike. Compare this to something like Metro: Last Light, which is one of the prettiest games I've ever seen on the surface, a fact that's constantly undone by its near-complete lack of facial animations.

So, regardless of how mediocre we thought Ryse would be and how much it entirely meets those expectations in some ways, it's still got some value. Its visual majesty, solid plot and brutal combat make it an easy experience to digest in small portions, which is about all that Ryse offers, anyway. I'd never recommend that you actually pay full price for the thing, but if you've ever got the opportunity to rent it and punch through it in an evening, eh, I've played worse. It's good of Microsoft to release a launch game that's a true technical showcase for the new hardware, and something of a relief that Ryse is just a bit more than that.

If you enjoyed this Ryse: Son of Rome review, you're encouraged to discuss it with the author and with other members of the site's community. If you don't already have an HonestGamers account, you can sign up for one in a snap. Thank you for reading!

© 1998-2021 HonestGamers
None of the material contained within this site may be reproduced in any conceivable fashion without permission from the author(s) of said material. This site is not sponsored or endorsed by Nintendo, Sega, Sony, Microsoft, or any other such party. Ryse: Son of Rome is a registered trademark of its copyright holder. This site makes no claim to Ryse: Son of Rome, its characters, screenshots, artwork, music, or any intellectual property contained within. Opinions expressed on this site do not necessarily represent the opinion of site staff or sponsors. Staff and freelance reviews are typically written based on time spent with a retail review copy or review key for the game that is provided by its publisher.