A lot of people died A lot of people you begrudgingly cared about died. Heres the thing; if the zombie apocalypse hit tomorrow, you (yes, YOU) would not survive it. You wouldnt. Almost everybody dies, and perhaps the dead are the lucky ones. Those that are left have to try to eke out an existence outnumbered in a world filled to the brim with flesh-eating monsters that never sleep and never stop. Lee Everett was a man bound for jail before the police cruiser taking him to the joint crashed, and the chatty officer that once offered sympathies subsequently tried to eat his face. In trying to escape, he stumbled across an eight year old girl hiding in a tree house  enter Clementine. From there on, Lees goal wasnt so much to keep himself alive; it was to protect the girl at all costs in the face of everything around him telling him he was unfit to do so. All his decisions  every last choice throughout the five episodes his journey would take  had to be taken with the stewardship of the little girl firmly in mind. In Lees world, shit hit the fan with a vicious sense of suddenness, and hard choices had to be made within a snatched handful of seconds. There was rarely any good to be found, and the slightly lesser of two evils had to be concerned on the spot. Whatever you did wasnt pretty, there would be consequences and...


Clementine will remember that.

Shit. You just robbed a little girl of a little more of her innocence. 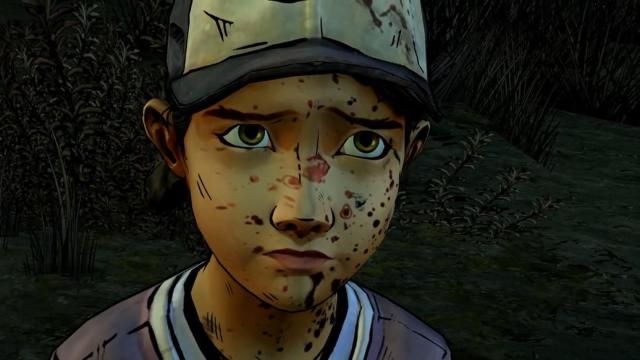 The Walking Dead: Season One might as well have been subtitled the raising of Clementine, as Lee Everett was forced to walk the razors edge between preserving the humanity of an impressionable child and ensuring her strong enough to survive in a world overflowing with cannibalistic corpses. It was purposefully bleak and depressing because, really, what joy can you find in such a world? Clem represented a sense of hope and normality that Lee and other survivors clung to like a life raft. They protected her all they could, but she wasnt just a cute face; she saved the day numerous times. She spoke her mind when she didnt like what was going on around her, and that you could shape her opinions in these matters was a powerful and frightening tool. Theres a fine line between having her be wary of strangers and not trusting anyone at all. Theres a fine line between choosing to curl up and die and deciding to face another day filled with horror.

Now promoted to prime protagonist, very early into the first episode of Telltales second season of The Walking Dead, a slightly older Clem will be faced with an immediate choice. Does she put herself at risk to try and save the life of her remaining companion, or does she slink away into the darkness of a forest in the hopes of remaining undetected My Clementine, the one I raised as Lee, would never abandon someone like that and... Oh shit, I just put the girl in direct harm and immediately regret my decision.

Switching from Lee to Clem instantly installs in the player a much deeper sense of protection  this is the child you nurtured, the one you were willing to sacrifice almost anything for, and now you are in direct control of her well-being. You dont just influence her; you are her. Telltale know what a delicate position theyve put returning players in, then go to work ensuring that the survival of the young girl is as difficult to watch as possible. 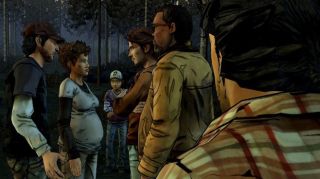 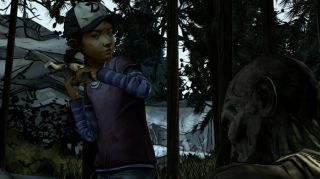 Clementine will have to do things to survive. They wont be pretty. They will be your fault.

As such, Episode 1 of Season 2 feels, in passing, similar to the first episode of the first season. Exhausted of previous allies, Clem will need to integrate with a new group of survivors in much the same way Lee did way back when. Only, Lee arrived with a small girl in tow, in situations where the aid of another person was more of a boon than an issue. The outbreak was in its infancy; people were still willing to trust, still willing to believe that normality would resume. These days are gone forever and Clem is afforded none of these luxuries. Shes a little girl, covered in blood, stumbling alone through the woods. Ask yourself this: would you trust her?

There are several paths you can plot to try and detract suspicions. Clem can try to manipulate the adults around her with sad eyes and reminders of her age, or she can talk to them on their level. She can be a hardarse, emotionally blackmail people when the chance presents itself, or just tell them what shes been through up to now and hope they believe her. Some will instantly warm to her, some will seem destined to set themselves up as eternal enemies, and thats okay, because weve all learned from Season One, right? Dont get too involved with anyone, no one is safe. Emotional attachments just bring heartache and gods damn it, Telltale, youve just made me do the exact opposite of that, havent you?

Season Two seems set to be the slow rise and almost certain descent of Clementine. Shes still a child, but shes no longer innocent, and she knows what she has to do to see another day. Its heart-breaking in a way to see how time has changed her, to hear the new edge to her voice, to see the new hardness in her eyes and to release in horror the path ahead of her, and what it pertains to. Shes no longer the moral compass, shes no longer the little girl you try to be a better person around so she can learn from you  she is the culmination of your efforts, and now its your job to keep her alive, to keep her safe. 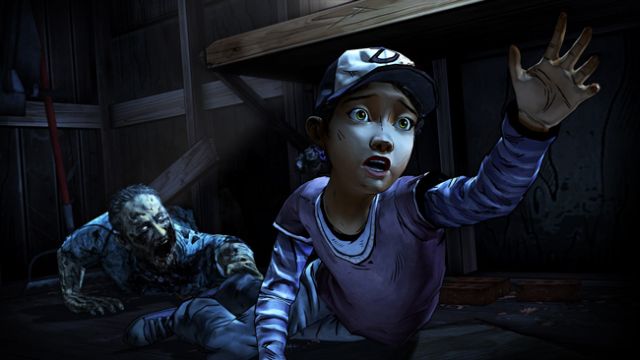 Thats not going to be easy. Episode One: All That Remains pulls no punches.

If you enjoyed this The Walking Dead: Season 2.1 - All That Remains review, you're encouraged to discuss it with the author and with other members of the site's community. If you don't already have an HonestGamers account, you can sign up for one in a snap. Thank you for reading!

© 1998-2021 HonestGamers
None of the material contained within this site may be reproduced in any conceivable fashion without permission from the author(s) of said material. This site is not sponsored or endorsed by Nintendo, Sega, Sony, Microsoft, or any other such party. The Walking Dead: Season 2.1 - All That Remains is a registered trademark of its copyright holder. This site makes no claim to The Walking Dead: Season 2.1 - All That Remains, its characters, screenshots, artwork, music, or any intellectual property contained within. Opinions expressed on this site do not necessarily represent the opinion of site staff or sponsors. Staff and freelance reviews are typically written based on time spent with a retail review copy or review key for the game that is provided by its publisher.