Tearaway might just be the most spoiler-proof game I've ever played. It's fueled by big, genre-bending ideas, and it's got so many of them that I could rattle off a dozen of the game's most memorable moments and I'd barely be scratching the surface of what the game has to offer.

It was developed by Media Molecule, the team responsible for LittleBigPlanet, one of the best games of the past generation. Tearaway shares many similarities, but hosts one key difference. Both games are cute, colorful and unabashedly kid-friendly, and both are set in worlds made of found materials  plush upholstery in one, papercraft in the other. But whereas LittleBigPlanet was a much-needed revitalization of familiar but largely forgotten establishments (2D platforming and couch multiplayer), Tearaway makes a constant habit of exploring new territory. That's not to say that touch screen and motion controls, two of Tearaway's most essential ingredients, are anything out of the ordinary these days; if anything, most core gamers are getting sick of them. The problem, as it happens, is that developers have a difficult time making new methods of control relevant when, in most cases, analog sticks and buttons do the job perfectly well. 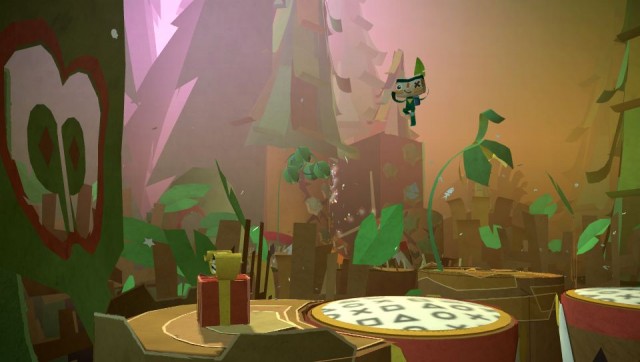 Tearaway, on the other hand, never resorts to gimmicks. At the very start of the game, our protagonist is confronted by a handful of impish enemies called Scraps, and we're called upon to destroy them with our fingers. Our fingers. Our real, human fingers. We do this by rubbing the touch pad on the back of the Vita, whereupon said fingers jut through the ground on-screen and send the Scraps sailing through the air. We then notice that the floor in this area is lined with a pattern awfully similar to the one on the Vita's touch pad. And that's it. Now we know that whenever we see that pattern, we can push our fingers through the ground again. When a massive waterfall blocks our character's path much farther down the line and we see the familiar touch pad texture behind it, we immediately know that we must poke our fingers through the cliff's walls and block the flow of water so our protagonist can safely move through. It's not a gimmick; it's a mechanic that comes and goes as readily as jumping or attacking.

This is a 3D platformer, a term that I feel does Tearaway a disservice. Playing the game is not simply a matter of pointing yourself in a direction and jumping when necessary; in fact, it's several levels in before a basic jump command is even introduced. Media Molecule is aware of the jump command, but they are not pressured by it. Before you gain that most basic of abilities, you're taught to launch your character into the air through far less conventional means: by standing on a bongo drum and tapping on the back of the Vita to send him (or her) flying.Tearaway eventually finds uses for nearly all of Vita's buttons, but it establishes its other hardware tricks early and often.

The combat's pretty simple and the checkpoints are generous; this is a relatively easy game. It sort of needed to be. Tearaway, at its heart, is about leaping through colorful levels and collecting floating objects. We know this routine. The actual curve is in the controls, the way you're constantly moving your right hand from the buttons to the screen to the touch pad, tapping, rubbing, swiping, doing all sorts of things. It all fits, but it's unusual, and the game's welcoming difficulty level makes the constant transitions from one input style to another comfortable. In a culture more accepting of touch screen controls as a core establishment, having to remove your thumb from the face buttons to physically smash an enemy wouldn't be asking much. Here, while it's certainly a neat mechanic  the undersides of said enemies are painted with a fingerprint pattern which you'll recognize by that point  it functions all the better under the assumption that Tearaway won't punish you for not getting the hang of it immediately. 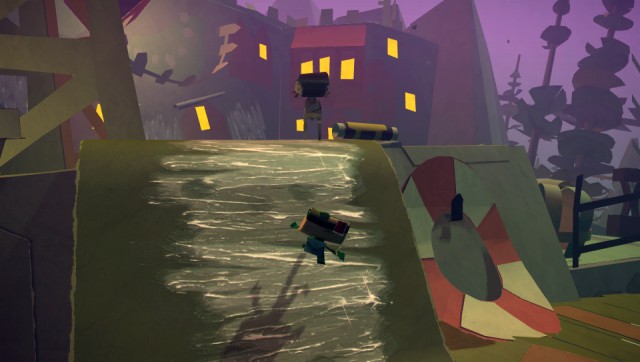 I'd almost argue that there's too much here for such a short game. By the time tilt controls are finally introduced, the campaign's nearly over. An unforgettable sequence that plays like a round of Marble Madness set within a sliding block puzzle is absolutely ingenious; you'll want to see more of it, and you won't. The game can be finished in maybe six hours, and it moves at such a rapid-fire pace that only a handful of its niftiest ideas get to flourish.

Wanting a game to be longer, or saying that it has too many cool ideas, isn't exactly the harshest criticism, so here's a real one: the camera can be a bit problematic at times, particularly when it goes automated. This generally isn't an issue due, again, to the game's generous checkpoint system, but there's a rather raucous chase sequence halfway through Tearaway in which not having full control over where you're looking can become a bit troublesome. The level tasks the game's frail protagonist with making a series of very tricky jumps while a couple of rabid creatures nibble at his ankles, and it's probably the only segment of the game that I'd call frustrating. Let it be known that 3D platforming and automated cameras don't mix; it's a basic institution of the genre that Media Molecule could afford to learn, along with the need for the main character to have a predictable shadow under his feet so players can more easily judge where they're going to land.

Where the folks at Media Molecule remain absolutely unmatched, however, is their quirky (and distinctly British) sense of humor and their impeccable eye for unique visuals. Tearaway presents us with a papercraft world that never breaks its own rules, even going so far as to give characters deliberately stilted animation, so as to mimic stop-motion. Everything presented in this universe  the waves crashing against a dock, the bits of dust rolling down a cliff side, all of it  could be crafted at a day care center with a box of construction paper, a bottle of glue and a pair of safety scissors. It's cute and colorful, and its disarming simplicity masks remarkable detail. The way structures bend under your feet, the way objects roll, fold and rip in ways that only stationery could... it's rich, sharp, and animated to perfection. If this is not the most visually striking game of 2013, I'd love to see what is. 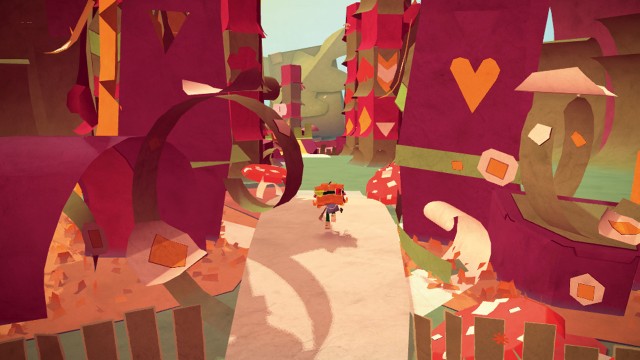 What's perhaps even more memorable is the level of personal touch you're able to give to Tearaway, as you're constantly called upon to supplement the world with your own shapes and pictures. Early in the game, you must climb a snowy mountain. Before you do that, though, you're asked to customize the shape and even the color of the snowflakes throughout the level. If you want to journey to the summit while orange coffee mugs fall out of the sky around you, go right ahead. Later, a squirrel asks you to design new fur patterns for him and his buddies using the Vita's camera. I happened to be drinking beer at the time, and thus the remainder of the level was populated by a dray of Yuengling squirrels.

So Tearaway is never less than surprising and lovely to look at, and within minutes, the first Vita game I owned sold me on the hardware from a technical standpoint, the massive screen bringing Media Molecule's unique world to crisp, vibrant life. In the six or so hours that followed, I became sold on everything else about the Vita, and the ways in which the things that I'd previously regarded as gimmicks can be approached as core mechanics. It's a full showcase for the handheld, a lightning-fast platformer, and a quirky delight all at once. Tearaway frequently incorporates the player's own face into the game, broadcasting directly from the Vita's front camera and giving the envelope-shaped protagonist a goal point. I'm opposed to this; I don't like my face, and I don't want to look at it. You know what, though? Every time I saw myself in Tearaway, I had a massive grin on my face.

I'm a deadpan guy. I never smile, unless I'm playing something as wonderful as Tearaway.
4.5/5

If you enjoyed this Tearaway review, you're encouraged to discuss it with the author and with other members of the site's community. If you don't already have an HonestGamers account, you can sign up for one in a snap. Thank you for reading!

© 1998-2021 HonestGamers
None of the material contained within this site may be reproduced in any conceivable fashion without permission from the author(s) of said material. This site is not sponsored or endorsed by Nintendo, Sega, Sony, Microsoft, or any other such party. Tearaway is a registered trademark of its copyright holder. This site makes no claim to Tearaway, its characters, screenshots, artwork, music, or any intellectual property contained within. Opinions expressed on this site do not necessarily represent the opinion of site staff or sponsors. Staff and freelance reviews are typically written based on time spent with a retail review copy or review key for the game that is provided by its publisher.