People sure do enjoying slamming the Assassin's Creed series for being Ubisoft's yearly cash cow, but those who do so are overlooking a bold, innovative new feature that's been added to this most recent entry: players now have the option to assign ratings, on a five-star scale, to the game's story missions upon completing them. "Give us feedback," Ubisoft demands. Fair enough. Maybe now they'll finally get the message that these stupid tailing missions have got to go.

I'm so frustrated right now. I've stood behind this franchise through thick and Revelations, my reasoning being that if you're going to annualize any IP, this is the one to do it with. Ideally (i.e., when Ubisoft isn't treadmilling with the "Ezio trilogy"), the premise allows the writers and designers to explore new period settings with each successive entry, interweaving fictional stories with historical figures and events and tying the series together with a modern-day sci-fi conspiracy plot that, if nothing else, you could go in a million directions with. Then there's the bonus that you can explore these beautiful places, that a central mechanic revolves around climbing to high altitudes and just admiring the views. 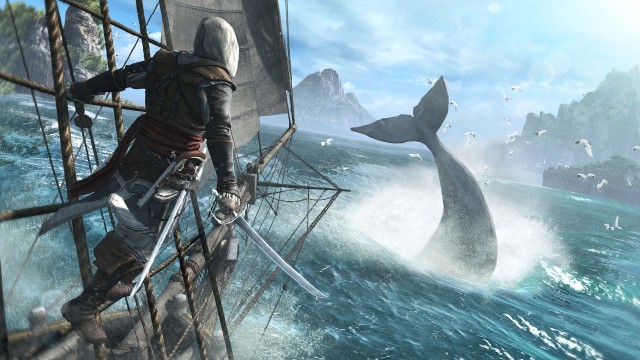 Assassin's Creed IV: Black Flag, in that regard, is the most successful Assassin's Creed in at least four years. It stars Edward Kenway, the series' most likeable protagonist to date, as a privateer during the Golden Age of Piracy. Famous individuals such as Bartholomew Roberts, Anne Bonny and Blackbeard all come and go during his search for a legendary treasure, and their ordeals are all intertwined so gracefully that if you were unfamiliar with these people, you probably wouldn't guess that the game's story was assembled largely by cobbling real-life events together.

In regular form, several cities from the era  this time it's Havana, Nassau and Kingston  have been recreated in marvelous detail, but the difference is that you can now traverse everything in between, as well. Naval combat (one of the few universally acclaimed features from Assassin's Creed III) has now been pulled to the forefront, as players must physically sail between the game's dozens of locations. If you can buy into the idea of the Caribbean Sea being condensed to the point that Florida and Jamaica are merely a short paddle from one another, roaming Black Flag's ocean and partaking in various pirate-y things  raiding ships, exploring underwater wrecks, following maps on which "X" literally marks the spot  is a blast.

And yet... the tailing missions.

See, here's the thing: I can recommend Black Flag for being vast, gorgeous and full of things to do. Those are the essential ingredients for a good sandbox game. You could ignore the story missions, sail freely for weeks, and have a wonderful time. But if you don't ignore the story missions, you'll have to tail people. You'll have to tail lots of people. You'll have to follow small groups as they contrivedly walk in and out of restricted areas. You'll need to remain within earshot of them to listen in on their conversations, but you'll also have to avoid drawing attention to yourself. You'll have to walk very slowly and do nothing for long stretches of time. And these sequences frequently end with Edward either getting caught or learning nothing terribly useful, anyway. Black Flag's tailing missions are the definition of stalling; in a game that's at its best when players are allowed to soak things in at their own pace, Ubisoft all too frequently asks us to take it at their pace. Their slow, plodding pace. 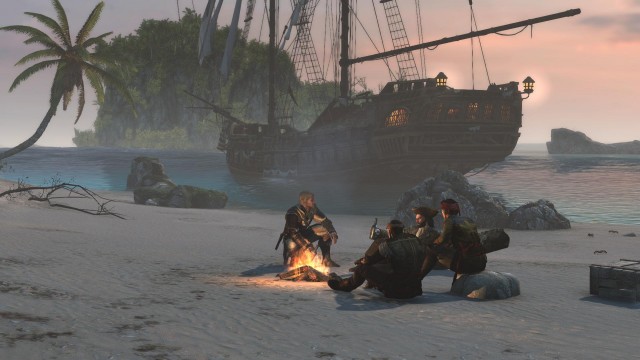 I don't think that Black Flag exists because Ubisoft the publisher demanded that a new Assassin's Creed be released every year; I think that Ubisoft the developer wanted an excuse to make a rollicking pirate adventure, and the two compromised. As a pirate game, Black Flag is magnificent. It takes the weighty, intentionally awkward naval combat from the last game and works it into an economy that actually flows for once, since the act of gathering resources (by, y'know, attacking other ships) is great fun and serves a purpose by allowing you to make vital improvements to your own vessel. You harpoon whales. You unearth buried treasure. You uncover exotic locations  beaches, coves, jungles, all of that. The crew actually sings sea shanties while you're sailing. Sea shanties! It's such good fun!

But, oof, those tailing missions

Black Flag's campaign, despite having quite possibly my favorite story of the series to date, moves at a slug's pace. And if it seems unfair for me to mark an Assassin's Creed game down so much simply for sticking to a design choice that was very much present in the previous titles, know that there were numerous instances throughout Black Flag in which I considered outright quitting, despite all of the fun I was having elsewhere. I don't want to slowly saunter about town, following yellow waypoints whilst being explicitly told not to do anything exciting. This isn't fun. And when you juxtapose it with raining cannon fire upon a military brig amidst a hurricane, boarding it, climbing the mast and cutting the flag down, this nonsense looks even worse.

Aside from being set in such a fascinating world to explore, Black Flag moves the series in two promising directions. The first is that the stealth is somewhat workable for once, now that we have something vaguely resembling a cover system (in which Edward can hide quite easily in shrubbery). The other is that, with the Desmond arc wrapped up, Ubisoft's writers are free to go wild with the modern-day framing story, this time getting a bit tongue-in-cheek with Abstergo re-imagined as  ta-da!  a French entertainment corporation. It takes itself less seriously than before (the protagonist doesn't have a name, a voice or even a face), yet it's no less full of juicy tidbits to chew on, for those of us still interested in Juno, the Templars, and all of that. 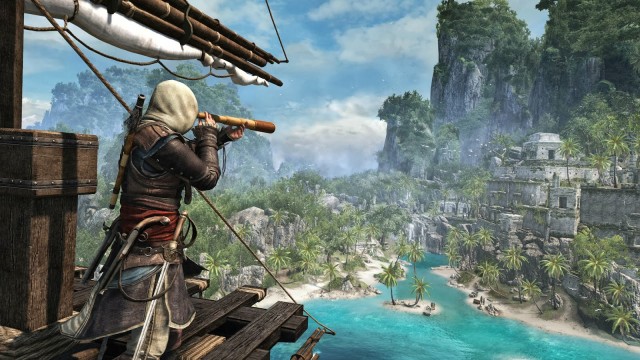 But where Ubisoft has taken a couple of steps forward, they also take a couple sideways. One of them, as we have established, is the tailing missions, and how they seems to be getting more numerous with each entry. The other is the hand-to-hand combat, which is just as clumsy as it ever was. For a while, Assassin's Creed sidestepped this issue by letting players chain together insta-kills, but now that ability is more limited, with many enemies requiring certain attack combos or dodges to bring down. You can feel Ubisoft trying to mimic the combat in the Arkham games by relying on rapid button presses and queued counters, but it's got nowhere near the immediacy, the fluidity or the brutality. And let's face it: this is a pirate game. You want the swordplay to be enjoyable, don't you?

I can still give Black Flag a hearty recommendation as a simple collect-a-thon, and don't act for a second like you haven't bitten deep into games like Crackdown for the same reason. If you do play it, though, take advantage of that rating system. Let's tell them just how much we want those tailing missions gone in next year's entry. Take action!

If you enjoyed this Assassin's Creed IV: Black Flag review, you're encouraged to discuss it with the author and with other members of the site's community. If you don't already have an HonestGamers account, you can sign up for one in a snap. Thank you for reading!

© 1998-2021 HonestGamers
None of the material contained within this site may be reproduced in any conceivable fashion without permission from the author(s) of said material. This site is not sponsored or endorsed by Nintendo, Sega, Sony, Microsoft, or any other such party. Assassin's Creed IV: Black Flag is a registered trademark of its copyright holder. This site makes no claim to Assassin's Creed IV: Black Flag, its characters, screenshots, artwork, music, or any intellectual property contained within. Opinions expressed on this site do not necessarily represent the opinion of site staff or sponsors. Staff and freelance reviews are typically written based on time spent with a retail review copy or review key for the game that is provided by its publisher.