Call of Duty: Ghosts is a Call of Duty game. Theres simply no way of getting around that. Its a very simple first-person shooter offering a short campaign and a heavy emphasis on multiplayer. You are a soldier fighting other soldiers who speak a different language, and if you are playing the campaign, you are an unbeatable super soldier even though youve barely had any experience. In the multiplayer modes, you are a ballistics dummy with a gun strapped to you, hoping to God nobody finds you before the battle is over. You know, like in real war.

The campaign starts out strong, actually. You learn about the Ghosts, who are like SEAL Team 6 but, you know, way better. You play a short sequence in space that is surprisingly enjoyable and well-written, and then youre thrown into the ruins of Los Angeles after the United States has been bombed and partially invaded by a new country called the United Federation. 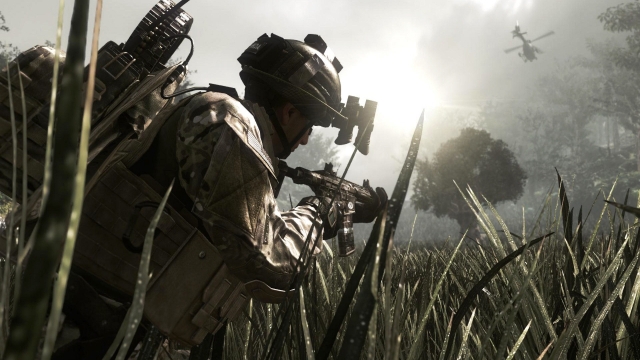 The characters are still flat and uninteresting, but at least were in a different setting than the sort found in most recent Call of Duty games. It felt like this could actually build to something that would be meaningful and interesting. Or at least a really good action movie, which, at the end of the day, is all the Call of Duty games ever set out to be. Youre not here for deep characters or a believable romance; youre here to blow things up and be a badass, right? Well, if youre not, Ive got bad news for you, because thats pretty much all youre going to do.

These positives didnt last long, though. As the player, you still wind up spending most of your time hiding behind cover and letting the rest of your squad kill the bad guys. You are still tasked with hunting down a terrorist who is so impossibly badass that his very existence is a war crime. You quickly go from the interesting ruins of Los Angeles to standard first-person shooter fare like oil platforms, snow bases, and office buildings. It was disappointing mainly because I felt like this setting could really be something special.

For example, you are fighting for the United States while the country is on the ropes, getting beaten by a bigger, more powerful country. Again, its an interesting way to start a Call of Duty game. Sure, you immediately join the Ghosts who, for whatever reason, are completely unhindered by any sort of budget as the United States is gasping for breath, but lets put that aside for now. Then, you are squaring off against a much bigger, more powerful country, using hit-and-run tactics and ignoring civilian casualties. Its as if you play as the US version of the terrorist organization to stop these foreigners from invading your soil. And theyre called the United Federation. Does this sound familiar to anyone else? 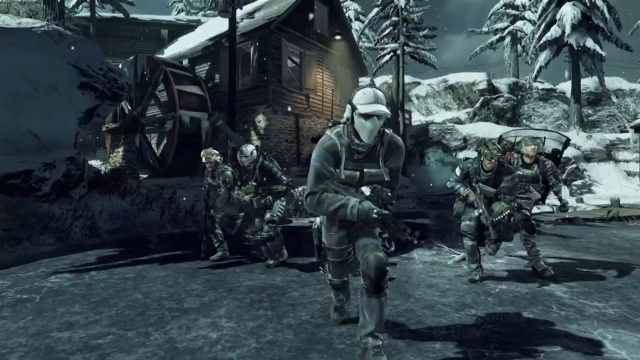 The game completely fails to take advantage of this premise, but what a fascinating game that would have made! To fight a parallel-universe version of the United States, to actually represent the groups that are normally the villains of every other Call of Duty game, would have been an incredible risk. I held out hope for a while, but then I saw that the terrorist youre hunting down is an old white guy in a doo rag and realized I might be giving the writers a bit too much credit.

Speaking of white guys, they are everywhere in this game. I mean, seriously, there is nothing else to look at. One woman shows up in the first ten minutes and is quickly killed off, and then you encounter one black guy who wears a mask for his first three minutes of screen time. He does take the mask off when he is killed, which is also the only time we are given the chance to realize that hes black. Like the story, its easy to read too much into this, and Im sure that the developers just forgot that other races and genders exist, but its a disturbing trend that I would love to see end right here and now.

Ive never been able to understand this. That woman could easily have been a man. They simply chose to make her a woman as if filling some quota. The same goes for Ajax turning out to be black. The characters just have nothing to them; they are there for a few minutes to shut up the minority groups and then they disappear. This is lip service and nothing more, and it rang as hollow and disturbing. Again, though, youre fighting an old white guy with a doo rag, so what did you expect? 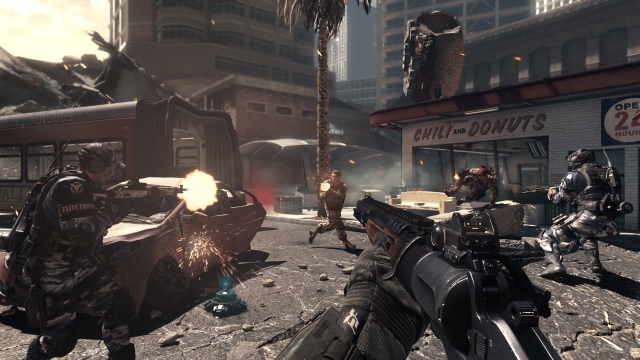 So the campaign had promise, but falls flat. The underwater and space scenes lent it a little bit of variety, as did the all-too-short level where you can order your dog to stealthily murder your enemies, but, ultimately, it just felt too simple. Thats the problem with the game as a whole, especially in the gameplay department. Everything is simplified to make you feel like a badass as you are provided no reason to worry about doing anything else. There are times when you just stand there and wait for your AI squad mates to finish all the complicated stuff like hacking a computer, and then you hit the button to kick things off. Its boring. You feel like youre not even needed.

Then, when you do have stuff to do, the game orders you around like a house servant. Go here, hit this button, shoot all these guys, but dont wander off! Every time I tried to get away from my squad mates and kill more guys, every hostile AI in the vicinity would immediately target me and Id find myself riddled with bullets wondering why my cover stopped covering me so well. The game seems to actually punish you for trying to play it your own way. In that manner, it probably is like the military, teaching you not to question or disobey. Just follow your orders to the letter or youre dead. Fun, right?

Multiplayer is well, its the multiplayer youve by now come to expect. If youre familiar at all with Call of Duty, you know what youre getting yourself into. Theres lots of camping out and waiting for people to walk by so that you can shoot them. Theres lots of sniping, too. None of it is much fun. Like the campaign, everything is streamlined so that you can just go in and shoot people, if thats what you feel like doing. The most disturbing thing here is that the dog, easily my favorite character from the campaign, can show up and get killed! I was too traumatized once that happened to play any further. I would have preferred more of the juvenile taunting, but maybe thats just me.

Also, there are aliens. Theyre not in the actual single-player campaign, thankfully, but they do show up in a mode called Extinction. I would love to talk more about Extinction, but after spending an hour waiting for other people to join my party, I got fed up and just quit. Honestly, if its going to be that much of a hassle to get repeatedly killed by aliens, Id rather just play XCOM, where I feel like I deserve it.

If you enjoyed this Call of Duty: Ghosts review, you're encouraged to discuss it with the author and with other members of the site's community. If you don't already have an HonestGamers account, you can sign up for one in a snap. Thank you for reading!

© 1998-2021 HonestGamers
None of the material contained within this site may be reproduced in any conceivable fashion without permission from the author(s) of said material. This site is not sponsored or endorsed by Nintendo, Sega, Sony, Microsoft, or any other such party. Call of Duty: Ghosts is a registered trademark of its copyright holder. This site makes no claim to Call of Duty: Ghosts, its characters, screenshots, artwork, music, or any intellectual property contained within. Opinions expressed on this site do not necessarily represent the opinion of site staff or sponsors. Staff and freelance reviews are typically written based on time spent with a retail review copy or review key for the game that is provided by its publisher.