Dynamite Cop was in an interesting situation as a sequel: it didn't need to exceed any sort of expectations because, let's face it, the standards set by its predecessor were pretty low. But I say that with love! As one of the first beat'em ups to dabble in the realm of 3D, Die Hard Arcade wasn't trying to reinvent the wheel, instead just aiming for a playable, fun experience, and the devs accomplished that goal. Sure, controlling your character feels stiff (think Virtua Fighter 1-style movement) and the enemies are surprisingly brutal at times, but the locations and atmosphere really make up for some of these shortcomings. The strikingly similar setting to Die Hard 1 (with SoA obtaining the license for the Western release), the abundance of out-of-place-looking characters like the afro man in a jump suit, and unusual weapons such as a janitor's broom, makes the game a very short, but memorable romp.

So for Dynamite Cop to screw up something as simple and goofy as that would be mind-numbingly amazing. The sequel thankfully retains a lot of the mechanics and feel of the first game, but instead of trying to insert oddball tidbits here and there, Dynamite Cop embraces its quirky side, going all out in its silliness. This time taking place mostly on a cruise ship, returning protagonist Bruno Delinger must face off against modern day pirates who have the president's daughter held hostage. Well... when the term "modern day pirates" pops up during the opening sequence, you see a man in a viking helmet and an old, bearded fellow with a bizarre, high-tech, eye patch/hat hybrid. Of course, the latter is coincidentally the same antagonist from the first game. What are the odds? 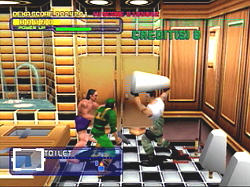 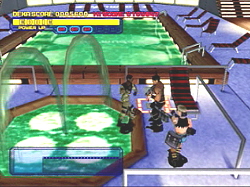 As the game begins, you're treated to a marathon of absurdity as your character runs through various corridors and rooms in this luxurious ship; enter a dinner hall and prepare to pick up cake to throw at dual blade-wielders, fend off crab-people with slabs of meat in the freezer, or fire an anti-ship missile at a big-boned pirate couple that causes a mushroom cloud, which only takes off half their health. Little details, like hazardous background objects, the ability to arrest opponents with a handgun, and to an extent... the QTE sequences that act as transitions, also make a nice return. All this, too, with slightly improved mechanics to the battle system. No longer do you have to worry about awkwardly shifting around the play field, as this sequel allows you the freedom to move in any direction, which, while it sounds like a small adjustment, makes for a much, much more comfortable experience.

While Dynamite Cop surpasses Die Hard Arcade in some areas, the overall quality of this Dreamcast successor doesn't come off the superior product due to certain bumpy spots. To my recollection, this title has some of the roughest pacing I've experienced in recent memory. There's never a "stage complete" moment, so I can never tell when one level ends and another begins, boss entrances are so low-key and unimpressive that half can be considered regular enemies, and despite beating the game at least six times, I'm always thrown off guard by the fact that I'm suddenly fighting the final boss, as it happens with zero build up. Going from scene to scene can also be very disorienting at times, because they make no sense, taking you totally out of the loop for a second. I mean, a freezer conveyer belt that leads to the engine room? Wha? And... and I can't think of another example. That's just how confusing it gets sometimes, that everything blends so much that you can't recall the order of events in a game that lasts about 30 minutes. 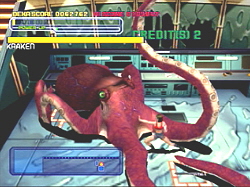 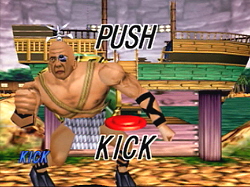 Some might consider this next complaint shallow, and I'll admit it does feel nitpicky, but I just think the graphics are unflattering to look at; specifically, I find fault in the colors used for basically everything I see in the game. All the goons I end up defeating with a plate of grenades and kicks to the groin (actual things that happen) look like Sega obtained the license to an American Saturday morning action cartoon from the 90s, as most characters consist of clothes with bright reds, purples, and greens. The settings also have a really unappealing look to them, with everything washed out and plastered with nasty colors you'd associate with vomit. Seriously, the ship's pool is coated with green water, the pirates hideout looks like a Castle Grayskull toy set I played with as a kid, and the disco floor in the ship's bar is nauseating to stare at. People are going to think I'm crazy, but Die Hard Arcade is actually much more attractive to look at despite being "primitive" in comparison.

Despite those issues, Dynamite Cop is a wacky, fun game to play with friends that have no clue what they're getting into. Though, I can't recommend the game as something to get right away over the Dreamcast's more worthwhile titles, as it quickly loses its thunder on repeat plays due to said problems and low play time. That's not to say Sega didn't try their best to extend replay value with several console exclusives, as they've included numerous modes, with one that makes the game harder, another based on survival, a bonus Sega game (1980's Tranquilizer Gun), and even a comic with some corny, funny dialogue. Even then, the game doesn't have enough girth as a beat'em up, as many of its 2D uncles have nearly the exact length, yet still manage to pull it off impressively and with more sustainability. But for just a scant few dollars, it's worth a round of fun and laughs with company.

If you enjoyed this Dynamite Cop! review, you're encouraged to discuss it with the author and with other members of the site's community. If you don't already have an HonestGamers account, you can sign up for one in a snap. Thank you for reading!

© 1998-2022 HonestGamers
None of the material contained within this site may be reproduced in any conceivable fashion without permission from the author(s) of said material. This site is not sponsored or endorsed by Nintendo, Sega, Sony, Microsoft, or any other such party. Dynamite Cop! is a registered trademark of its copyright holder. This site makes no claim to Dynamite Cop!, its characters, screenshots, artwork, music, or any intellectual property contained within. Opinions expressed on this site do not necessarily represent the opinion of site staff or sponsors. Staff and freelance reviews are typically written based on time spent with a retail review copy or review key for the game that is provided by its publisher.