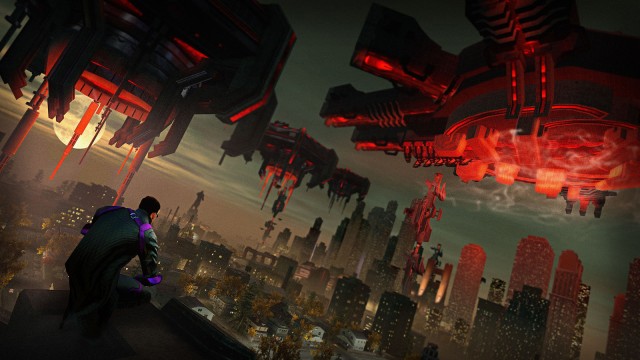 Good news, sandbox fans! Since the people Microsoft hired to make a Crackdown sequel were too chicken to do anything but simply copy-and-paste the city from the first game and call it a day, the folks at Volition have taken a stab at it with Saints Row IV, and they've done quite well. They've realized, as others have, that when freedom is the name of the game, there's no reason to restrict players to simply walking the streets. Why not have players leaping over buildings, outrunning bullets and throwing cars?

If you asked me to compile a list of my favorite sandbox titles of this generation, I suspect I'd be one of the few not to name Crackdown. Orb-collecting was good fun, yes, but that's a mechanic, not a game. I'm someone who needs context. I need something to do and a reason to do it. Saints Row IV's influences are obvious, and no one could call the game terribly original, but it doesn't matter. It takes elements that have made other recent sandbox games successful  gravity-pushing freedom and blissful mayhem  and imbues them with a level of charm, humor and purpose that most others are either too serious or too uncommitted to reach. It's essentially the Crackdown game that I always wanted. All they need to do now is throw in an orb-collecting mechanic, and wait, they did do that? Oh. Well, I guess Saints Row IV is pretty brilliant, then. 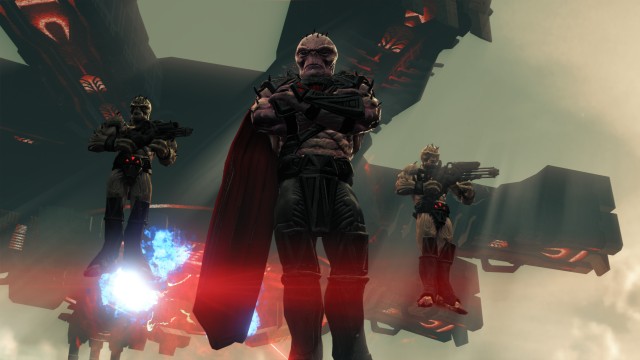 Tasking an established human with doing decidedly superhuman things is a bit tricky, and Volition jumps through a few relatively silly hoops to make it happen. A few years after the last Saints Row game, your character  simply named "the Boss"  has been elected President of the United States, with his or her gang of Saints serving as the White House staff. Then Earth is invaded by aliens, of course. The Zin, as they're called, capture the Saints and place them in a computer simulation designed to mentally break them, and what follows is somewhat reminiscent of The Matrix, with the Boss and his or her team bending the rules of the program to accomplish otherwise impossible things.

From a combat standpoint, this means that you can ditch firearms and battle enemies by freezing them, setting them on fire, telepathically throwing objects around, and so forth. From an exploratory standpoint, this means that you will collect orbs. They're called "clusters" here, but they're Crackdown orbs to the bone, glowing doodads that taunt you from the highest locations of the city. Attempting to complete missions in Saints Row IV is surprisingly difficult at first, because every time you enter a new area of the city, you go on a massive orb-hunting spree. It's irresistible. The game's controls aren't always perfect, particularly where straight-up combat is concerned, but the platforming is intuitive, and expands at a fast enough rate (thanks to a fairly extensive skill tree), that merely exploring the Zin's simulation is one of Saints Row IV's draws, as it should be with any sandbox title.

I want to commend Volition for not making the city of Steelport too big, because when Just Cause 2 already exists, trying to impress us with size feels futile. That said, there's still quite a bit to do, ranging from your typical sandbox fare, like rooftop races and rampages, to less orthodox objectives, like having you throw yourself into traffic to rack up the largest hospital bill that you can in a given amount of time. Additionally, the actual story-centric missions are almost always throwing something new at you, with various other genres  from text adventures to stealth action games to side-scrolling beat-'em-ups  getting properly spoofed. I wouldn't be surprised if a few people wind up complaining that the campaign feels unfocused, but in this day and age, I see unpredictability as a good thing, and Saints Row IV is generally too fast-paced, and too consistently funny, to grow weary of. 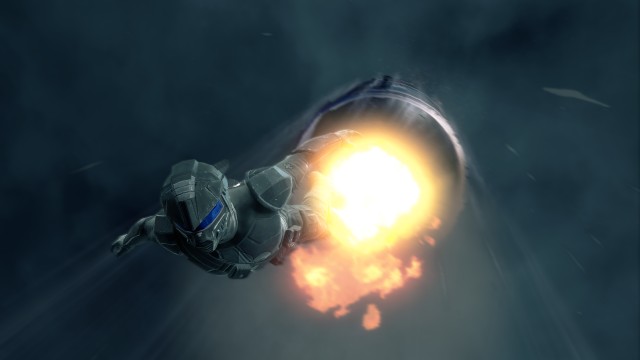 Unfortunately, we're not quite at the point where a game can offer the sheer scope and wealth of content on display in Saints Row IV and still feel as sharp and intuitive as a tighter, more controlled game, and Volition makes a couple of missteps. Most notably, it falls into the Prototype trap of not knowing how to challenge players when the biggest draw is making them feel overpowered. How do you ramp up the difficulty when, by the endgame, you can jump 20 stories into the air and fling cars at people? The answer, apparently, is to simply overwhelm players, and the last handful of missions get obnoxiously unruly with the sheer number of enemies attacking you at any given time. The terrible final boss is the worst offender, since the only real "challenge" to it is keeping your footing while indefinitely respawning robots knock you around like a pinball.

In fact, the last couple of hours of Saints Row IV ultimately fill a bit lazy compared to the rest of the campaign. What's curious is that Volition, through both mission descriptions and in-game dialog, acknowledges how arbitrary your objectives  going to these three points and shutting down these three generators, and so forth  start to become after a while. So why do it? This is why self-parody is such a tricky thing to pull off in an interactive medium. If you can make me laugh, great, but I still need to play, and preferably enjoy, the game in question. No one could accuse Saints Row IV of not having enough content, and as such, there was no reason to pad it out like this.

What kept me going, even through the game's eventual rough spots, was the story, and I'm utterly dumbfounded to hear myself say that. I only have passing experience with the previous three games, and I went into Saints Row IV fully expecting the cast  which, it needs to be said, includes Keith David as Vice President Keith David  to fulfill the sole purpose of dropping one-liners. As it happens, extensive play time with Saints Row IV's predecessors isn't necessary, because the characters and their relationships with one another exude so much delicate compassion that we have no trouble believing that these people have years of friendship behind them. It's also relatively ingenious on Volition's part that the simulation each Saint is being held in centers on their biggest fears and personal demons, making the Boss's efforts to rescue them a treasure trove of character development that less audacious writers would struggle to unveil. 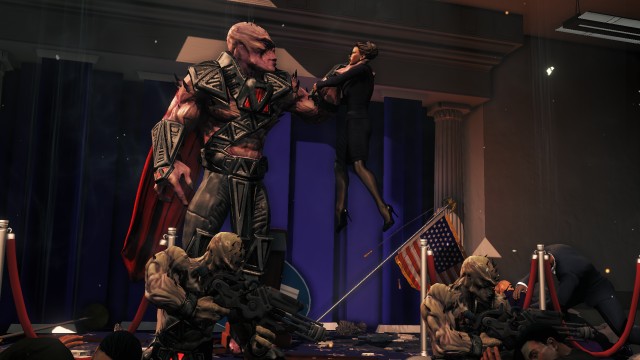 So while closing with a dance-off to Montell Jordan's "This Is How We Do It" sounds clichéd, Saints Row IV's cast earns it. It's also somewhat notable that the Boss himself (or herself) manages to be one of the most sympathetic characters in any game this year despite having a fully customizable appearance and seven possible voices. I expected the script to be hilarious, and it absolutely is, but I didn't expect it to be touching, too.

Saints Row IV is a triumph in many ways, then, pulling the best ingredients from its many clear influences together into a package that's funnier and more colorful than any of those games dared to be. We'll find out a month from now whether or not Grand Theft Auto  the series that, let's be honest, we have to thank for Saints Row and other similar franchises for existing  can still keep up with a sandbox climate that's changed quite a bit over the last few years, but even if it disappoints, we'll still have Saints Row IV, an apt benchmark for how far the genre has come.

If you enjoyed this Saints Row IV review, you're encouraged to discuss it with the author and with other members of the site's community. If you don't already have an HonestGamers account, you can sign up for one in a snap. Thank you for reading!

© 1998-2021 HonestGamers
None of the material contained within this site may be reproduced in any conceivable fashion without permission from the author(s) of said material. This site is not sponsored or endorsed by Nintendo, Sega, Sony, Microsoft, or any other such party. Saints Row IV is a registered trademark of its copyright holder. This site makes no claim to Saints Row IV, its characters, screenshots, artwork, music, or any intellectual property contained within. Opinions expressed on this site do not necessarily represent the opinion of site staff or sponsors. Staff and freelance reviews are typically written based on time spent with a retail review copy or review key for the game that is provided by its publisher.