Guess it's just a habit carried over from my childhood, but even in this day and age, whenever I purchase a new title, there's still a need to take a brief look in the manual before starting up the game. And since they just don't make booklets like they used to, I'm always disappointed seeing a manual that's only two or three pages filled with seizure warnings and copyrights, with some telling me to go on the Internet for instructions! So when I flipped open DARK's pamphlet, I was both surprised and uncomfortable when the introductory page started talking about Twilight. Yes, that Twilight. It didn't say it by name, but "sparkling, metrosexual vampires", "movies", and "male underwear models" pretty much gave it away. However, the pain subsided when the introduction wasn't in favor of said fad, and went on to say that DARK is an attempt to harken back to the oldschool ways of the vampire. Five pages later, I was also given a list of ingredients for an alcoholic beverage. What. While it didn't give me the same excitable, mushy feeling of yesteryear's manuals, it's been quite some time that a modern one made me eager to dive into a game due to such unorthodox printings!

Not even a couple minutes in, I found myself in a nightclub with some awful trance music and people with tacky clothing. Apparently, the developers' idea of "oldschool" is vampires running a business in a late 90s/early 00s setting. Then there's the plot: you just became a half-vampire, have amnesia, and with the help of an unintentionally cross-eyed nightclub owner, a man that talks in "dude speak", and twin sisters (all vampires), you begin your quest to transform into a full vampire in order to prevent the dreadful alternative. If the story sounds like it'll be a bore, you're right, and it doesn't help that you won't care for any of the characters, which is a setback for the plot when serious things happen to them later on. The protagonist is the guiltiest of all, sadly, since this man has zero personality, talks in a brooding, monotone manner, and thanks to the amnesia angle, you're literally playing with an empty shell. I guess the one upside is that I don't hate any of these characters, which could have made for a dreadful experience. 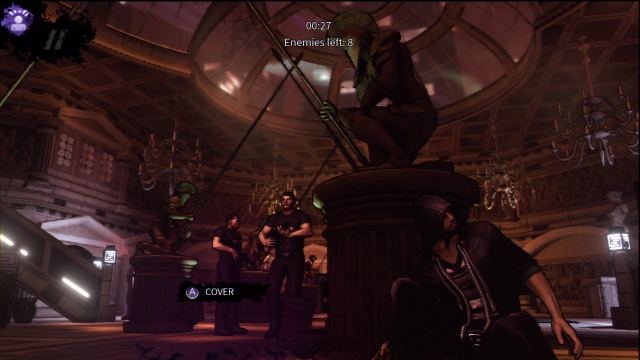 I didn't buy DARK for its award-winning narrative, thankfully, but because it's a stealth title. Well, that, and I was curious due to the hate the game was receiving. Despite the genre having some well-known titles in today's gaming, like Metal Gear, Splinter Cell, and Assassin's Creed, the genre itself doesn't really churn out that many releases every few years, so it's always neat seeing a new IP crop up. The concept of a vampire setting has surprisingly seen little action in the stealth category, as well, with the only title I can name at the top of my head is 2006's Vampire Rain, a release loved by the masses... Apparently playing it safe, the game borrows some elements from recent titles, like the "x-ray vision" mechanic seen in the Arkham Batmans and Hitman: Absolution, with DARK dubbing it Vampire Vision. Probably the most important thing in any stealth game, too, is your ability to hide well, and in turn, require tightly-programmed movements to minimize errors when sneaking. So I was glad when, in just a minute or so of the tutorial, I was able to command my half-vampire easily as he latched to various walls and sneak behind opponents without much hassle.

Besides the ease of snooping around, though, the main driving force behind DARK's gameplay is the various vampire powers you get to use and obtain through skill trees. When you first hit the select button and see all the listed powers, you become gleeful due to all the possible outcomes: from putting enemies in a daze and causing a noise distraction, to killing victims at a distance with a "Force choke" and temporarily making yourself harder to see in the open, the devs give you a lot to play with. And the only way you can purchase and upgrade these abilities is by collecting experience points, which you gain by killing enemies (extra points for stealth kills), finding PDAs (yay, text logs...), and a huge bonus for exiting areas without ever being caught. I wasn't exaggerating when I said the skill trees are quite the motivation, since there were numerous instances where I could easily leave a heavily-guarded room, but opted to stay and attack everyone for more experience points. 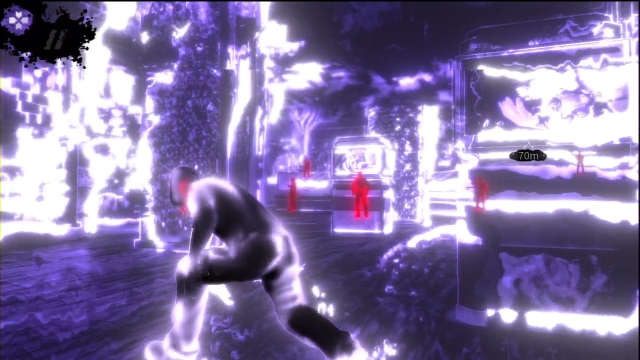 However, as I made progress through this title, gaining powers and becoming a more formidable opponent to my foes, I was troubled. At first I assumed it was just a short slump that's going to end eventually, but when I made more advancements, it was obvious: DARK's game flow stopped evolving and gave up on raising the difficulty. New enemies crop up, sure, but they're not a significant improvement over what you had to deal with beforehand. Armored soldiers, for example, can't get their blood sucked, a thing you perform if you want to refill your power bar, yet you can still kill them in one hit. As for new traps, well, they could have been a threat... but considering any troubling object is highlighted in Vampire Vision, they just become different shapes to look out for. Sure, you have to purchase an upgrade to see those objects, but the devs made that easy to buy early in the game. I wasn't halfway through the first stage when I bought it!

When I made these unfortunate discoveries later in DARK, I couldn't help but find my predicament ironic. When I was playing through the game's early stages, I was a bit impatient with having to go about things with a lack of abilities, having to rely on quick reflexes and last-second decisions based on guards sweeping the area after being spotted. But after maxing out the more important powers during the latter half and wiping away huge sectors of guards without breaking a sweat, I was missing the rawness I felt near the beginning of DARK; there was impending dread as I noticed a security guard walk towards me while I slowly sucked on someone's throat, tensions rising when I attempted to drag a corpse into hiding, only for a leg to get stuck in a corner, and the helplessness I felt when my power bar was depleted, having no choice but to pounce a guard in the open before he calls for help. Those feelings are somewhat absent once you have the strength to subdue one soldier with a daze and literally evaporate another within the span of three seconds. 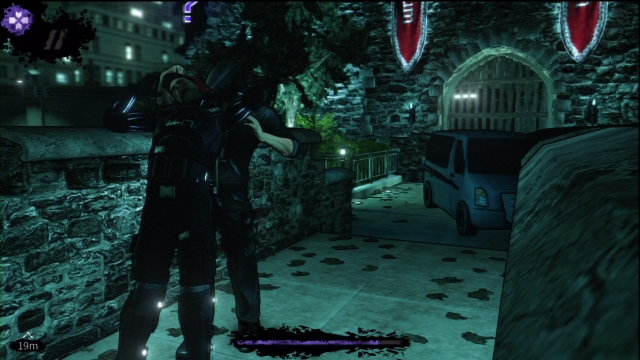 Now, despite prior paragraphs kinda having a negative tone, I really don't see DARK as a horrible release. Okay, the plot and characters are very forgettable, but not once did I accuse the gameplay of being terrible, only that I was disappointed that it never upped the difficulty to match and predict the type of powers the player gets later on. And if, for some reason, that wasn't doable for the dev team, they could have at least modified the skill trees to remove or gimp certain powers, as well as banish Vampire Vision altogether for a more genuine stealth experience. Other than that, once I completed the game and sat through the credits, I realized I had no bitterness towards DARK, and it was because I still had a decent time with the title. When I thought about it more, I actually came to the conclusion that the standard nature of the play mechanics saved the game from turning into something much worse.

DARK just might be one of the most generic, indifferent games to come out in 2013, but surely not one of the worst titles ever, which some people might lead you to believe with some really weird and superficial complaints. Mouths don't move when people talk? Except they do. The game being too glitchy to play? I've spotted weird things, but nothing that destroys gameplay. Too hard? You lost me on that one. I swear, it felt like I was playing the spiritual successor to Vampire Rain, since both share the distinction of being stealth games involving vampires that received some of the strangest backlash I've seen in the medium. Can't wait for the next vampire stealth game in six years!

If you enjoyed this DARK review, you're encouraged to discuss it with the author and with other members of the site's community. If you don't already have an HonestGamers account, you can sign up for one in a snap. Thank you for reading!

© 1998-2021 HonestGamers
None of the material contained within this site may be reproduced in any conceivable fashion without permission from the author(s) of said material. This site is not sponsored or endorsed by Nintendo, Sega, Sony, Microsoft, or any other such party. DARK is a registered trademark of its copyright holder. This site makes no claim to DARK, its characters, screenshots, artwork, music, or any intellectual property contained within. Opinions expressed on this site do not necessarily represent the opinion of site staff or sponsors. Staff and freelance reviews are typically written based on time spent with a retail review copy or review key for the game that is provided by its publisher.