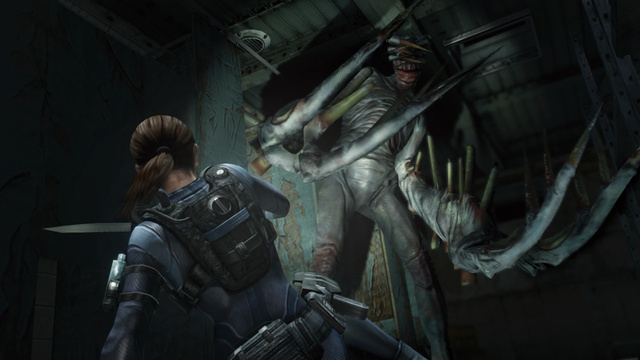 Well, gee. I was all good and ready to name Resident Evil: Revelations the best game in the series since Resident Evil 4, and then I fought the Scagdead.

Let me back up. The setup here is that Jill and her vaguely foreign teammate Parker are sent aboard an abandoned cruise ship called the Queen Zenobia to search for a missing Chris Redfield. The vessel serves as the campaign's primary setting, making this the first Resident Evil in who-knows-how-long to be set largely in a single, contained environment (a welcome return to form). After (a) "Chris" turns out to be a plastic dummy, and (b) their boat is destroyed, Jill and Parker realize that they've fallen into a trap, a problem exacerbated by the ship being the latest victim of a bioterrorist attack and overrun with numerous very ugly things.

Their first order of business, then, is to get off the damn ship, which should be a simple matter of using the communications systems to reestablish contact with their superiors. The good news is that the comms officer is still alive! The bad news is that he's not the comms officer anymore, but rather a hideous, bloated creature called the Scagdead. A particular creepy touch is that the Scagdead still seems to believe he's human. He's mumbling an S.O.S. broadcast when you come across him, and he tries desperately to reason with Jill and Parker even while he's swiping his buzzsaw-arms at their squishy bodies and they're shooting him in the face... which, it needs to be said, they'll probably do for something like two hours, given how many times I needed to reboot the checkpoint just to bring the creature down.

The Scagdead is essentially a crash course in terrible boss design. For one thing, he's a complete bullet sponge  after eight explosives detonated near him, four fully-charged kicks to his head and several dozen shotgun shells and machine gun rounds apiece unloaded on him, he was still walking. Adding to the frustration, he has an insta-kill attack, and the area is full of smaller enemies that respawn indefinitely, many of which can fire projectiles at you from afar. It's the sort of boss so pointlessly aggravating, and so bereft of any sort of feedback or sense of progression, that I was genuinely convinced that I was missing something, that there was some context-sensitive trick to killing him that was flying over my head. But no  it's just regular ol' bad game design. 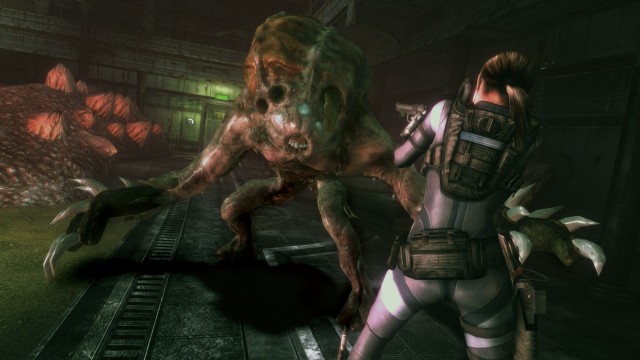 It's fair to say that Capcom's mentality with this series since 2005 has been "recreate the magic of Resident Evil 4," and it's an approach that's produced little more than loud noises and bright explosions. It's kind of a miracle, then, that we even have a game like Revelations, one that applies the more streamlined controls and action-driven focus of the recent titles to old-school survival horror design principles. The game essentially asks what you'd get if you took the original Resident Evil titles  the ones that pitted you against slow-moving undead creatures in contained, somewhat nonlinear settings  and fitted them with the over-the-shoulder shooter mechanics we've grown accustomed to since Leon Kennedy went on a rescue mission in rural Spain.

The answer, for the most part, is "something pretty cool," but then amateurish design decisions and problematic controls rear their heads. While the Scagdead is the game's lowest low, all of the bosses flat-out suck, mainly because their health meters are so absurdly large. It's one of two ways in which Revelations is difficult for a bad reason, the other being that the dodge function  an important tool for outwitting fast enemies or, indeed, bosses with insta-kill attacks  is outright broken. I'd have no issue accepting that I simply have trouble getting the timing right, but the kicker is that Jill frequently dodges attacks on her own, even when I don't so much as have my thumb on the corresponding button. It's a curiously unpredictable mechanic, and I was forced to wonder just how much smoother the game's most overbearing moments would have felt had I been able to use it more reliably.

In fact, the controls are altogether kind of lousy. This is essentially a high-def remastering of a 3DS release, and Revelations carries the marks of originating on a handheld. I don't mind the game being ugly; I do mind that it's not well-optimized for dual analog control. Aiming in Revelations doesn't feel like it was designed for a thumbstick  you have to tilt the thing at least a third of the way before it registers, and even then, the contrast between the reticle's slowest and fastest speed is minimal. It's a relief that the game's combat rarely demands any sort of precision, because that'd be a tall order. 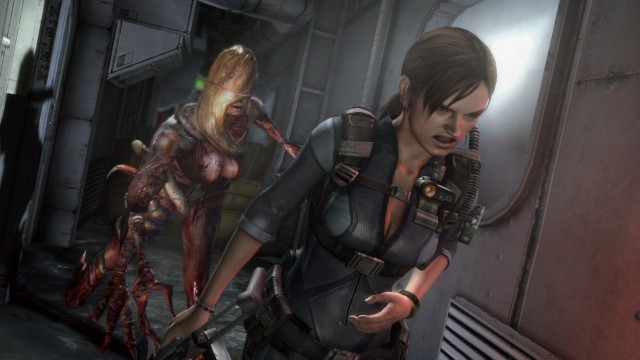 So, sitrep: bullet-sponge bosses, a necessary-but-broken dodge mechanic, cumbersome controls and last-gen visuals. Revelations sounds awful, right? What exactly does it have to offer?

Well, for one thing, it's actually pretty scary in spots. It's a shame that we're living in an age in which a Resident Evil game being frightening is actually a surprise, but there's a jump-in-your-seat shocker in the first ten minutes that's scarier than anything in the last two Dead Space titles, and a number of rather tense sequences throughout maintain the early standard. The game's piece de resistance is a level in which Jill is forced to explored a partly flooded portion of the ship and must frequently wade through waist-high water that's full of amphibious monsters. Being forced to listen for sound cues and track the creatures from their fleeting appearances above the surface is a rather devious take on low visibility that doesn't sink to Doom 3 levels of fumbling-in-the-dark cheapness. It's been a while since I could use "subtle" to describe a Resident Evil game, but there's genuine skill to crafting a sequence set in a well-lit room that can nevertheless make me tremble.

Beyond that, it's just nice to once again be playing a Resident Evil game with a real eye for environment and a true sense of progression. Familiarizing yourself with the SS Queen Zenobia's complex, overlapping layout is one of the game's simplest joys  it's one of those environments that you'll know inside-out by the time you're finished with the campaign, and probably my favorite Resident Evil setting since the mansion in the original. They've even thrown in a Metroid Prime-esque scanning mechanic that has you meticulously examining each room for hidden ammunition. While such series trademarks as ink ribbons and broken doorknobs are probably gone for good, this is the closest the franchise has come to feeling like retro survival horror in some time, and it's a rare sensation.

It's impeccably paced, too, for the most part. Since handheld games need to be designed with shorter play sessions in mind, Revelations is divided into twelve episodes, each with several individual chapters . Capcom makes the most of this structure by frequently pulling away from the central Jill plot to explore flashbacks and parallel stories, set in various other locations. It does wonders to keep Revelations fresh  just when you think that maybe you're getting a bit tired of looking at the interior of a dilapidated cruise ship, boom, you're transported to a floating city and tasked with ascending a high-rise full of lizard men. For all of its flaws, Revelations is certainly never boring. 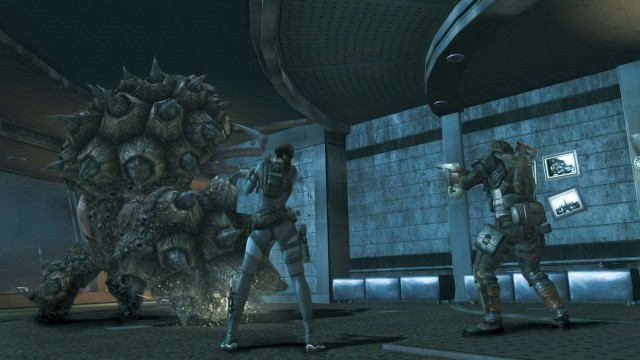 It does get a bit bogged down in spots trying to pad out its playtime, however. I can stomach the numerous fetch quests that more or less come with the territory for this sort of thing, but I'm less okay with a sequence in which Chris finds the Queen Zenobia at sea, leads a rescue mission through many of the areas that we've already explored extensively... and then realizes that he's actually on the Zenobia's sister ship, which of course has an identical layout. Oh, Chris. You wacky bumbler, you.

Revelations is a mixed bag, then, flitting violently between brilliance and triteness, intense atmosphere and sharp reminders that you're playing a video game. I can see why the original was praised so highly; for a handheld to produce the best Resident Evil in nearly a decade while its console big brothers are all banging pots and setting off fireworks is pretty badass. Now that it's actually on consoles, though, with the higher standards that a port job like this demands, it just feels like another addition to an increasingly long list of missed opportunities. It's absolutely a step in the right direction, and longtime fans should play it for that reason, but Capcom still has a way to go from here before the franchise will become truly relevant again.

If you enjoyed this Resident Evil: Revelations review, you're encouraged to discuss it with the author and with other members of the site's community. If you don't already have an HonestGamers account, you can sign up for one in a snap. Thank you for reading!

© 1998 - 2022 HonestGamers
None of the material contained within this site may be reproduced in any conceivable fashion without permission from the author(s) of said material. This site is not sponsored or endorsed by Nintendo, Sega, Sony, Microsoft, or any other such party. Resident Evil: Revelations is a registered trademark of its copyright holder. This site makes no claim to Resident Evil: Revelations, its characters, screenshots, artwork, music, or any intellectual property contained within. Opinions expressed on this site do not necessarily represent the opinion of site staff or sponsors. Staff and freelance reviews are typically written based on time spent with a retail review copy or review key for the game that is provided by its publisher.