As much as Shinobi turned out to be a fine action title in the arcades, there's no denying the game's success is partially thanks to Sega obviously taking the basics from Namco's Rolling Thunder, released a year prior. Both side-scrollers feature a main mechanic that allows you to jump between two planes, with Sega slightly adjusting things in transition, one of which is switching out a gun-wielding secret agent for a shuriken-tossing secret agent ninja. I'm not ousting Sega for "stealing" something, as video game companies have been borrowing elements from one another since the medium began, and still do to this day; in many instances, other development teams end up refining a mechanic for the better. What I find humorous, however, is when the formula proved to be a hit with Shinobi, the company reused the template a few more times, and one of them, ESWAT, appears to be Sega's version of Rolling Thunder. 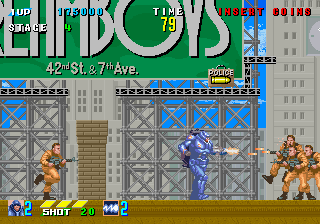 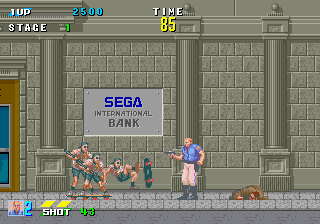 In the role of a police officer, you have to crack down on rampant crime in Liberty City, and you're apparently allowed to use deadly force on anyone who lifts a finger. And, as shown in the first round, this also includes a bunch of skateboard kids holding crowbars. Of course, this being an action game from the 1980s, you're probably envisioning your character to be a burly man with bulging muscles and a rugged face, or at least the swag-tastic Albatross from Rolling Thunder. Well, you get the exact opposite of those images, and perhaps the dorkiest protagonist to come out of Sega. When you first set your eyes on him giving chase after bank robbers, his posture is amazing: he's slightly hunched over, speed walks into danger, and holds his gun in one hand while clenching his fist in the other, all giving the impression there's something stuck up his butt. There's also another silly observation I made in repeat plays... he gets out from the backseat of police cars! There seriously must be something wrong if you're a cop that not only hitches a ride with other cops, but also forced to sit in the back.

Figuring the odd presentation of said character to be a goof on Sega's behalf, I was expecting the gameplay to be as good as Rolling Thunder or Shinobi. To my astonishment, boredom set in not even three rounds in! They got the general idea right, with your officer against countless goons equipped with guns, knives, grenades, and flamethrowers, oh my, but presented in such a surprisingly monotone fashion. It doesn't come close to the other two titles, where enemies come at you fast and furious, and you need to use your skills and the two planes to your advantage. The level design for those often change for something refreshing, too, like a pitfall stage, or one where you must advance vertically. But for the first three rounds, ESWAT functions exactly the same, where you simply move to the right through indistinguishable city streets, shoot anyone that literally shuffle their way on screen, and occasionally slow down to jump over crates. The boss fights are embarrassingly simple, as well, as you dodge slow attacks coming from the likes of a fire-breather, a boomerang thug, and a punk with a hook; jump, shoot, duck, shoot, and jump some more, all without actually moving out of place, sadly. 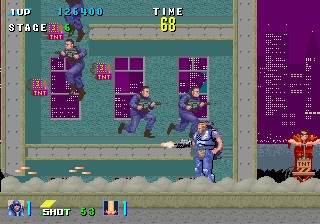 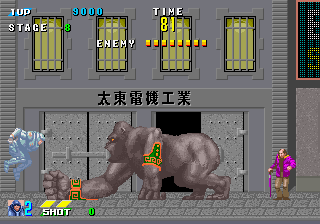 But, wait! ESWAT introduces a gimmick starting with round four! After busting the first three bosses, you get promoted to the Enhanced Special Weapons And Tactics unit and fitted with an exoskeleton which makes your dude look less dorky. With the power of rapid fire and the ability to pick up special attacks, surely the whole game makes a wonderful transformation itself. Without skipping a beat, ESWAT continues its tedious trek through 15 rounds. I should say I had no idea how many rounds there were coming in, so every two or so minutes, I would look in the upper left corner and mutter something like, "Round 7?? This is the second to last one, right?" I mean, how badly do you mess up an action game where even the music composer felt the title didn't deserve anything exciting to go along with it?! The most thrilling tune manages to sound like you're taking a peaceful jog, and the boss theme is elevator music you'd likely hear during a low-key, comedic cutscene.

ESWAT "tries" some variety, but they're rare, and comes off so laughable that you wish they shouldn't have tried in the first place. In round six, you're stuck inside a crumbling building where you must avoid explosives while gangs march from above. But the thing is, everything moves at an incredibly slow pace, making for zero challenge and atmosphere. The game is "kinda" hard at times, but it's the cheap type, because the screen only scrolls when your guy is near the right side, and enemies have a habit of shooting projectiles the second they pop up. So, yeah, you get a bunch of lame hits. Probably explains why you have a health bar and two lives to work with. By the second half of ESWAT, you'll be attacked by mad hoppers, turrets, and a ginormous gorilla that throws barrels (hmm), but by then, the game has long run out of fuel... and it's not even 30 minutes in length to complete. Some teams can take a template and refine it for the better. Others can just give you a different, fun version on it. And then there are those that take it and fumble. It's mesmerizing that Sega can do the latter two in just a span of two years from each other. Then again, that sounds like something Sega can masterfully pull off. 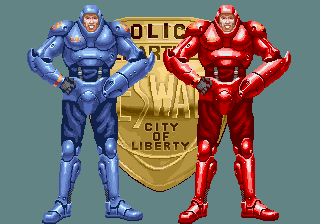 If you enjoyed this ESWAT: Cyber Police review, you're encouraged to discuss it with the author and with other members of the site's community. If you don't already have an HonestGamers account, you can sign up for one in a snap. Thank you for reading!

© 1998-2021 HonestGamers
None of the material contained within this site may be reproduced in any conceivable fashion without permission from the author(s) of said material. This site is not sponsored or endorsed by Nintendo, Sega, Sony, Microsoft, or any other such party. ESWAT: Cyber Police is a registered trademark of its copyright holder. This site makes no claim to ESWAT: Cyber Police, its characters, screenshots, artwork, music, or any intellectual property contained within. Opinions expressed on this site do not necessarily represent the opinion of site staff or sponsors. Staff and freelance reviews are typically written based on time spent with a retail review copy or review key for the game that is provided by its publisher.