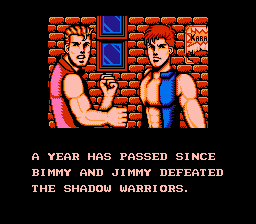 Normally, by the time a series has reached its third outing, kinks have been ironed out. Normally. And with these issues resolved, the developers can concentrate on making a sequel that strengthens its good qualities in what might possibly be a very enjoyable product. However, the NES Double Dragon titles have strangely defied these expectations going into the third installment. The previous games feature interesting elements that could have made them fun experiences, but several setbacks, unfortunately, transformed them into frustratingly hard adventures. With the NES franchise suffering from an apparent identity crisis, Double Dragon III: The Sacred Stones needed to achieve a surreal goal: it had to be a decent beat'em up. Considering the Double Dragon name is synonymous with the genre, at least in relation to the arcade original, that is such a weird thing to write.

On the surface, DDIII seems to get the basics right, allowing a full array of moves from the get-go, like DDII, and mainly being fought on multi-plane locations. You won't see a single-plane segment until the last stage, where you have to fight irritating opponents over pits, so of course it's annoying. The game also includes aspects that diversify the action, like having additional characters join your plight, each having differing strengths and weaknesses in terms of speed, power, and jumping. Every character has their own powerful sub-weapon, too, from nunchucks, to hand claws and shuriken, with the catch being you can only use them for a limited amount per stage. One other thing I think is worth a mention is how most stages have a unique look, thanks to the plot demanding the protagonists go globe-trotting. Typically, you start out brawling on the streets in the USA, but here you eventually venture out to places like a castle in Japan and the Colosseum in Italy, fending off ninjas and gladiators. China's level is pretty uncreative, though, looking like a normal forest setting with the Great Wall briefly appearing in the back to signify its location. 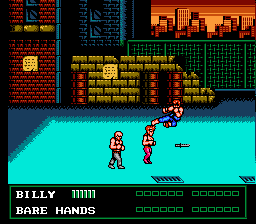 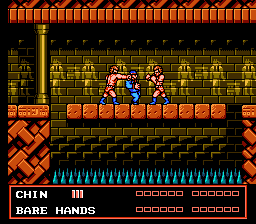 Sounding like it passed qualifications for being a decent brawler with neat mechanics, DDIII almost guaranteed its spot as the "best" offering on the console. But in what feels like an act of defiance against logic, DDIII manages to do the unthinkable, becoming the most saddening Double Dragon for the system. The difficulty in the previous games were irritating at times, but with some tinkering, could have been very playable from start to finish, which DDIII's basic setup addressed. Unbelievably, Technos refused to leave well enough alone, deciding to mess with simple aspects from the game's predecessors in order to have a jacked difficulty curve.

Fighting enemies is a bigger pain than it should be, and keep in mind, this is while on multi-plane areas! It's easier for opponents break your combos to sneak in hits, and they're more aggressive when crowding your personal space, meaning it's a bit tougher to perform crowd control. Another misstep is how your attacking speed is a tad slower than before, almost giving off a rhythmic feeling that's comparable to a game like Golden Axe for the Genesis. Now throw in the gracious return of enemies attacking the second you regain your footing, and you truly have a workout. With all these new-found obstacles working against you, it's not surprising to lose all health on the first or second stages.

The changes don't stop there, either, as if Technos made these adjustments to bruise your self-esteem. One such modification is something that didn't feel like a big deal before, and that is the removal of health regeneration when entering a new screen. Well, apparently it is a big deal, since you need all the health you can sustain with all the problems presented so far. The most questionable change, though, is your life count. The other DD's gave you three lives and no continues to work with, which is already pushing it, but that doesn't come close to DDIII's new limit: one. Right from the start, you'll be in a state of constant dread, trying your best not to lose that precious life in a game so eager to snatch it away. You do gain two additional lives later, by means of the two characters joining your side. But not much solace can be taken from that considering the difficulty spikes in the final level, mostly thanks to a certain, pesky single-plane segment. So you basically must preserve every single life right down to the climax. 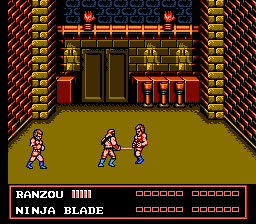 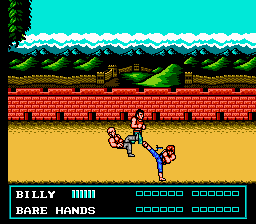 Sadly, once you've played the game enough times, you'll discover that one simple tactic is vital for conquering 99% of DDIII, which happens to involve only using the jump kick. Don't know why, since its success rate varied in the last two games... the move just works more efficiently now for some reason. And if you haven't foreseen it yet, using this lone move over and over is a serious nuisance, casting an immediate spell of repetition. Worse, you battle a bigger stock of enemies than ever before, in what feels like an endless loop of duos per screen. It quickly turns into a dull, draining experience that makes its predecessor's game design look like works of art in comparison.

Yes, that's right, these are the major methods for "victory" in DDIII: fight normally with constant fear of failing through no fault of your own, or numb yourself to death with a lame strategy that sucks all the fun out of playing a video game. At first, I thought the horrible adjustments were made by Acclaim when released for western audiences, but when I played the Japanese version, it was the same. Then I quickly realized I should have known better than to think they did any proper changes, especially with the infamous translation of Billy's name to BIMMY. At least with Double Dragon's case, the game kinda got away with its issues due to inexperience, and with Double Dragon II, Technos tried making a hard game a little too demanding. Double Dragon III, however, is a hard one to swallow; I don't get the changes, I don't get the extreme difficulty, and I don't get why they thought this was suitable for release. For a company that helped define and popularize the beat'em up genre with Double Dragon in the arcades, they really left an odd and sloppy representation of the name on one of gaming's most famous systems.

If you enjoyed this Double Dragon III: The Sacred Stones review, you're encouraged to discuss it with the author and with other members of the site's community. If you don't already have an HonestGamers account, you can sign up for one in a snap. Thank you for reading!

© 1998-2021 HonestGamers
None of the material contained within this site may be reproduced in any conceivable fashion without permission from the author(s) of said material. This site is not sponsored or endorsed by Nintendo, Sega, Sony, Microsoft, or any other such party. Double Dragon III: The Sacred Stones is a registered trademark of its copyright holder. This site makes no claim to Double Dragon III: The Sacred Stones, its characters, screenshots, artwork, music, or any intellectual property contained within. Opinions expressed on this site do not necessarily represent the opinion of site staff or sponsors. Staff and freelance reviews are typically written based on time spent with a retail review copy or review key for the game that is provided by its publisher.