No amount of nostalgia could override the pain and annoyance the NES port of Double Dragon put me through, and as said at the end of my review, I'd have preferred a straight, generic port over that nonsense. So when I recently booted up Double Dragon II: The Revenge, the one DD title on the NES I barely spent time with, I was taken aback by how... generic the beat'em up felt. Could it be? Technos learned from its mistakes? Immediately noticeable is how you have all your moves from the start, ditching the level-up system from its predecessor. Right off the bat, you can use jump kicks, grab punks and knee their faces in, perform a spin kick, and even have two special moves that require precise timing to execute. Now I don't consider the level-up system one of these mistakes, as I thought it was kinda clever for the early stages, but if its absence meant for a smoother experience (for some reason), then so be it.

As I fought my way towards DDII's climax, there was a bunch of stuff I was willing to compromise on, since first impressions were a bit more favorable compared to the first title. I was inclined to forgive the fact that the stages following the first one sucked, what with stage two simply having you climb up and down some water pipes with weak resistance, and stage three being pathetically short, taking place on a single screen in a helicopter. The charming character designs, too, have now been replaced by straight-edged, stoic types, like the buzz cut goons that do cartwheels and Arnold Schwarzenegger wannabes. I was also begrudgingly trying to overlook how DDII's soundtrack is dreadfully tame; instead of a rousing beat at the title screen that hypes you up, you receive a rather mundane melody, and the remainder of the journey is littered with elevator music. You seriously don't get anything memorable or atmospheric until stage six, where a brooding tune plays as you enter a mysterious mansion.

I am not implying, though, that I'm going to ignore these shortcomings and praise the game, because as has been described so far, DDII isn't exactly the bee's knees. What I'm saying is that the game appeared to be a slightly improved title over the original, and I was willing to accept an average product over a crap one. However, as I slowly made my way towards the ending on repeat plays, no thanks to the return of the three life count limit, I soon unraveled the real nature of DDII's game design. The horrifying truth: Technos didn't learn from its mistakes, instead deciding to strengthen those flaws. While the first game's issues irritated me to no end, I pitied Double Dragon to an extent, due to Technos' lack of experience with the NES. But in the sequel's case, the things Technos did are downright deliberate, which is pretty disturbing.

All the suffering you'll endure is mainly centered on the unpleasant reappearance of the single-plane segments, which, while only popping up twice in DD1, made quite the unfortunate impression. Most 2D beat'em ups pretty much task players to dance around playing fields, so they can set themselves up for a proper attack, right? Since, you know, walking toward enemies in a straight formation will likely net a beat down from them. So, of course, Technos made it a goal to place you in various, absurd circumstances regarding single-plane encounters, and some don't even involve fighting! The first major hurdle appears as a boss fight in stage two, when two zombie-looking ninjas rush and crowd you from opposite sides. Having nearly unpredictable, speedy patterns where they constantly back flip, fling shuriken from a distance, and stop dead in their tracks an inch away from your attack length, this battle easily drains you of health and lives with cheap hits. And like many single-plane incidents in DDII, if you're knocked to the ground by a brutal enemy, they'll be waiting with another blow as your avatar gets up. 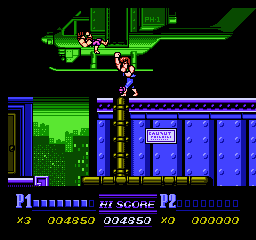 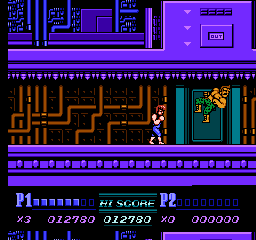 A perfectly frustrating example of this happens when you enter an underwater base in stage four, where you can't even jump to your advantage thanks to a low ceiling. Guess who you fight here: enemies that throw weapons, and a long-haired Abobo that can toss you over his head and smack you repeatedly into a corner. Later in DDII, Technos puts you in single-plane situations that demand platform jumping, and keep in mind that you can't control your movement as you jump. With that said... stage six forces you to jump on a set of disappearing platforms hovering over spike pits that kill instantly. Afterwards, there's a conveyor belt section over spike pits, and a little after that, there's another spike pit area where you must jump on rotatable cogs while also having to dodge spikes that launch into the air. If these things are a challenge in a game like Mega Man, where you have a character that's flexible while jumping, imagine the horror that occurs here. Hell, that game is gracious enough to allow a continue option!

The troublesome single-plane locations, along with the extremely low life count of thr... whoa, deja vu. It's crazy how, what I thought might have been a mild improvement, turns out to be some kind of bizarro follow-up that downplays the good qualities of the first game while mutating most of its weaknesses. Sure, there's things like having all your moves and the inclusion of two-player co-op, but it feels like a lot of charm and common sense was lost in the process. Again, reaching the end is going to be mentally exhausting, especially with all the annoying ways to die instantly, and honestly, the only way I made it to the final stages was by cheating, which I did by beating up the second player and stealing away lives. Poor Jimmy... Not like the payoff was worth it, though, since the last two bosses have the ability to beat you down while invisible. Joy!

If you enjoyed this Double Dragon II: The Revenge review, you're encouraged to discuss it with the author and with other members of the site's community. If you don't already have an HonestGamers account, you can sign up for one in a snap. Thank you for reading!

© 1998 - 2022 HonestGamers
None of the material contained within this site may be reproduced in any conceivable fashion without permission from the author(s) of said material. This site is not sponsored or endorsed by Nintendo, Sega, Sony, Microsoft, or any other such party. Double Dragon II: The Revenge is a registered trademark of its copyright holder. This site makes no claim to Double Dragon II: The Revenge, its characters, screenshots, artwork, music, or any intellectual property contained within. Opinions expressed on this site do not necessarily represent the opinion of site staff or sponsors. Staff and freelance reviews are typically written based on time spent with a retail review copy or review key for the game that is provided by its publisher.