Gears of War: Judgment might  might  have been a worthwhile purchase if we still lived in an age in which the series' trademark brand of heavy, cover-based, shakycam-porn shooter combat wasn't mimicked by seemingly half of the games being released. Gears had its time in the sun, first when it was new and exciting, and then when it still did what it did better than anything else. But this is 2013. A third-person shooter feels archaic if it doesn't have a cover system and inadequate if it's not as good as Gears. Developers have had enough time to figure this stuff out by now, and even something cheap and slapdash like Inversion, when it's aping its source material, gets the basics right.

Judgment's big new feature is a three-star scoring system that factors headshots, executions, deaths, and every other facet of your performance into your end-of-level evaluations. It's a cool idea that makes the campaign tremendously replayable if you're the sort of person to replay a Gears game. Epic (working with People Can Fly, the team responsible for the excellent Bulletstorm) even thought to throw in optional Declassified missions, which place additional handicaps on the player  such as weapon restrictions or time limits  and award higher star ratings if completed. Perfectionists will get a lot of value out of Judgment. 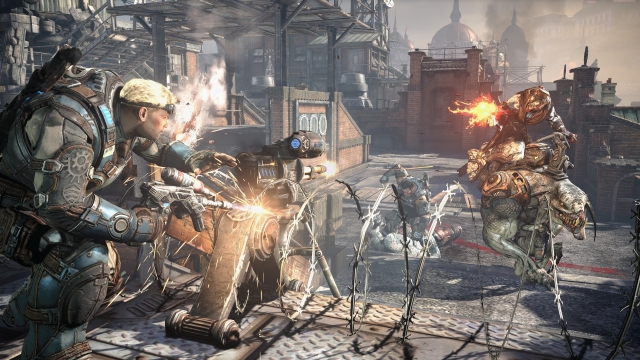 Stripping the Gears formula down to bring its gunplay to the front and center probably doesn't sound like a terribly bold move, since any Gears game is just going to be a series of shootout against Locust anyway, right? The scoring system is a neat idea, but Epic got so hung up on it that they've chopped Judgment's campaign into much smaller pieces, with each mission typically lasting only a few minutes. Shorter missions mean smaller levels, with many consisting of only a single room each. Smaller levels mean simpler objectives, with players usually being simply dropped into an area and asked to hold off waves of attackers. And it's all held together by the absolute barest minimum of a story.

I can't criticize Judgment's paper-thin plot without sounding like I consider the original trilogy a masterclass of storytelling. I don't. I think it's as poorly-written as anyone else does, but at the same time, I've always admired the attention to detail in making Sera feel so lived-in. I always got the sense that even if I wasn't invested in the events being depicted, the people who created this place were, and that matters for something. More importantly, the story gave the trilogy a sense of purpose. I didn't particularly care why I led the attack on that train, but I remember the gorgeous pink sunset, the lush scenery sweeping by, and the exhilarating feeling of sending a Berserker to its death on a detached car. Digging through a giant worm's innards, storming the Locust's underground fortress, treading lightly through the charred remains of a human city razed by its own kind... these were spectacular moments made possible by a central narrative that was, if nothing else, eventful.

Judgment is uneventful. It is a succession of disconnected rooms in which unremarkable firefights take place. We rarely even see our team moving from one area to the next; when a mission ends, we push a button, look over our scorecard, push another button, sit through a load screen, and find ourselves in the next area. The team has a vague set of objectives (and its members are pitted against the series' most underdeveloped villain yet, which is saying something), but there's no sense of flow or progression. Clearing an area loses its sense of accomplishment when the reward is to be shuffled along to the next arbitrary, enclosed gunfight. We're never moving forward; we're moving sideways until the game decides that we've done enough. The unlockable Aftermath mission, which tosses the scoring system aside in favor of more traditional structure and pacing, is too little, too late. 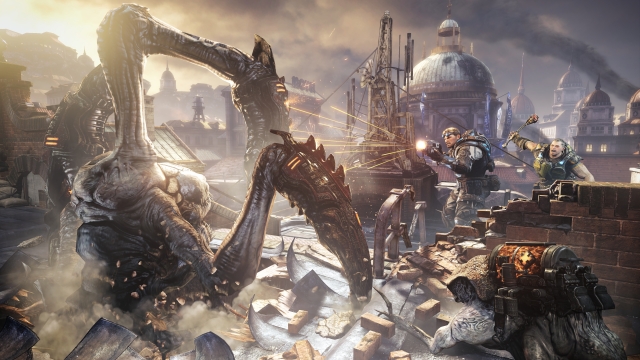 The game is so uninvolving that it even manages to suck all of the energy out of Gears' two most colorful characters. Baird and Cole were never exactly three-dimensional, but here, their only purpose is to deliver businessman-like narration, and the two new cast members contribute nothing. Cliffy B once criticized himself and his franchise for getting "drunk on set pieces" and vowed to take Gears in a more story-centric direction, but now the developers seem to have abandoned that as well. Free of momentum or purpose, Judgment is a feature-length Horde expansion, comparable to something like Halo 4's Spartan Ops... an optional mode that many players probably never even touched.

I recognize, however, that a lot of Gears fans are in it for the multiplayer. Fair enough. I've personally grown sick of the competitive stuff and will continue to be until they tone down the shotgun (which is overpowered and robs Gears of the tactical undercurrent that's supposed to make its gunplay flow so well), but a new free-for-all mode suits the play style pretty well. If you've been a fan of the series' online component thus far, then, Judgment won't betray you. On the other hand, it's only got four maps, because Epic and People Can Fly were apparently dead set on making Judgment feel lazy and rushed on all fronts, not just on the single-player side. If the game has a saving grace, it's the new OverRun mode, which is essentially a competitive take on the now-classic Horde. The first twist is that the invading Locust attackers are now controlled by players. The second twist is that the COGs are split into classes with various functions in combat. It's a time-tested concept that works beautifully here and introduces a demand for teamwork and coordination that the rest of the multiplayer is lacking. This is arguably the best Gears multiplayer has ever been, and considering how much fun Horde already was, that's noteworthy.

A few of Judgment's experiments stick the landing, and the core combat is still enjoyable enough that I don't outright dislike the game as a whole. But the arcade-like approach to its structure doesn't do the campaign any favors, and the entire production feels so phoned in that it's almost galling that they're charging full price for it. I love Gears, and I hate to criticize the series for being a victim of its own success, but it's now lowered itself to the same level as the legions of me-too imitators that it spawned, and frankly, a great number of them were more enjoyable than this. When a Gears of War game makes me itching to play freaking Binary Domain, that's a state of emergency.

If you enjoyed this Gears of War: Judgment review, you're encouraged to discuss it with the author and with other members of the site's community. If you don't already have an HonestGamers account, you can sign up for one in a snap. Thank you for reading!

© 1998 - 2022 HonestGamers
None of the material contained within this site may be reproduced in any conceivable fashion without permission from the author(s) of said material. This site is not sponsored or endorsed by Nintendo, Sega, Sony, Microsoft, or any other such party. Gears of War: Judgment is a registered trademark of its copyright holder. This site makes no claim to Gears of War: Judgment, its characters, screenshots, artwork, music, or any intellectual property contained within. Opinions expressed on this site do not necessarily represent the opinion of site staff or sponsors. Staff and freelance reviews are typically written based on time spent with a retail review copy or review key for the game that is provided by its publisher.