The reboot of the Tomb Raider franchise, aptly called Tomb Raider, is an excellent example of an action movie in video game form. Every appealing aspect of the action genre is present; Explosions, Bloody fights, Explosions, powerful weapons, a Thrilling story, and still more Explosions. The third person combat is inviting to new players, while at the same time offering some depth for the more experienced player.

You play as Lara Croft, daughter of famed archaeologist Richard Croft. You start on a ship searching for the legendary Sun God, Himiko, and her kingdom, Yamatai, in the Dragons Triangle (a Bermuda triangle clone). Legend says that Himiko has mythical powers that allow her to control the weather. Perhaps adding to the myth, Laras boat quickly pulls a Lost and gets destroyed by a storm, stranding Lara and the surviving crew on an unknown island. The main story is interesting, and it moves the action along nicely. There are also collectible GPS tags, relics, and journal entries which provide some history about the crew and the island.

The story is made more impactful by the Amazing voice acting; Camilla Luddington does a fantastic job as the voice of Lara Croft. Everything is voiced, including the collectible journal entries. The graphics are also exceptional, even in todays world of superb video game graphics. Liquids (whether they be blood or rain) will freckle the screen, adding an immersive quality to many scenes. 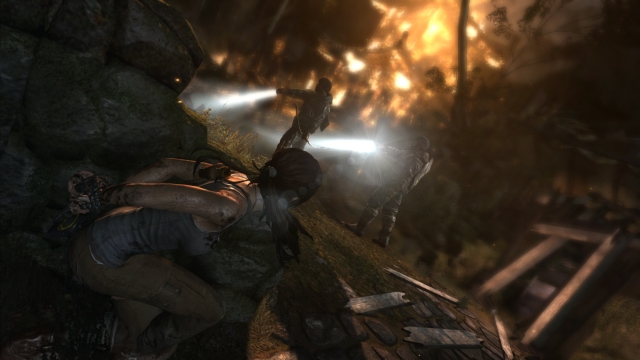 One of the main themes throughout Tomb Raider is the idea of survival. Lara will do whatever it takes to ensure both her and her friends survive and escape the island; even when what is required might make her sick with guilt. To aid in her survival, Laras survival instinct power scans an area, and highlights enemies, loot, climbable walls, and hints on how to solve puzzles. The highlights are taken away once Lara moves, but as long as she stays stationary, you are able to easily track highlighted enemies, allowing you to find the most opportune time to strike. The cover system in Tomb Raider is near the final evolution of cover systems in video games. Lara automatically takes cover whenever she walks up to a spot she can hide behind; simple and easy. It is nearly perfect, but at times it was difficult to find cover while running away from enemies. There are few optional tombs to raid which require you to solve easy puzzles, and in reward the location of all of the collectibles in the area will be displayed on the map.

Lara earns survival points (known as experience points in all other games) by killing enemies, foraging for food, and looting animals she has killed. Once enough survival points have been accumulated, you will be able to choose from 24 different upgrades, split into three categories; survival skills, combat skills, and hunter skills. The abilities range from increased survival points earned, to new melee options, to increased ammo capacity.

There are four weapons that Lara picks up along the way; a machine gun, a pistol, a bow, and a shotgun. You can upgrade the weapons using salvage, which is obtained by looting enemies and searching crates. All of the weapons have the same basic upgrade options; such as reduced recoil, increased damage, and increased magazine size. Weapons also have unique upgrades. For example the bow can be upgraded to shoot through armor.

There is a multiplayer option Shoved in as well, allowing up to eight people to fight each other. Tomb Raider features the basic deathmatch and team deathmatch modes seen in other games, as well as two team based modes; Cry for Help, and Rescue. Cry for Help and Rescue are both three round matches, alternating between who are the Survivors (the crew from the ship) and who are the Solarii (the native islanders).

The objective in Cry for Help is for the Survivors to activate radio towers by standing near them for a set amount of time. The Solariis objective is to kill 20 survivors before the radios are activated. The Solarii have a Huge advantage, as the survivors are required to clump up to complete their objective, and killing 20 people who are constantly clumped up at a pre-determined spot is very easy.

In Rescue, the Survivors must gather medical supplies and bring them back to their base. The Solariis objective is the same as in Cry for Help; kill 20 survivors before they complete their objective. In this mode, the survivors dont die once their HP is gone; they fall to the ground wounded, while retaining the ability to use a pistol. The Survivors can be revived by a teammate, denying the Solarii a kill. This gives the survivors a Huge advantage, as they basically have to be Killed Two Times. The Survivors can be executed by hitting them with melee attacks, but getting close to a person shooting a pistol at you is fairly hard.

There is also a leveling system in the multiplayer, which makes the first few matches infuriating. There are upgrades to increase health, to regenerate health faster, to take less bullet damage, and many more abilities that are great, once you get to a high enough level. When you are first starting out, having less HP than an enemy can be enraging.

Ignoring the multiplayer (as all but the most devout fans of the combat should do), Tomb Raider is a near perfect example of what video games should be; Bloody fun steeped in guilt, astonishing graphics, great voice acting, and a story that moves everything along pleasantly.

© 1998 - 2022 HonestGamers
None of the material contained within this site may be reproduced in any conceivable fashion without permission from the author(s) of said material. This site is not sponsored or endorsed by Nintendo, Sega, Sony, Microsoft, or any other such party. Tomb Raider is a registered trademark of its copyright holder. This site makes no claim to Tomb Raider, its characters, screenshots, artwork, music, or any intellectual property contained within. Opinions expressed on this site do not necessarily represent the opinion of site staff or sponsors. Staff and freelance reviews are typically written based on time spent with a retail review copy or review key for the game that is provided by its publisher.