Based on the beloved variety toon from the 1960s, Zen Studios' Rocky and Bullwinkle puts you through a gauntlet of microgames, a la Warioware and Tanto-R, trying your timing and patience in seven stages, each containing a set of 25 microgames. Every stage has its own character theme, from one following Bullwinkle's questionable activities like jumping on trampolines and playing darts blindfolded, to the bumbling exploits of Boris and Natasha as they swat mosquitoes and toss a bomb inside a locked room... while still in it. You'll also encounter adventures with Mr. Peabody and his pet boy, Dudley Do-Right on his silent duties, and nearly everyone that's appeared on the show in some form, all while voice samples accompany the lunacy. It sounds like this Xbox LIVE Arcade title provides some sort of entertainment, an achievement for a licensed product, but the keyword to look out for is: microgames. Considering how easy it is for games of this "genre" to fall in a despair of repetition due to their quick nature, developers have to tread carefully when constructing them. 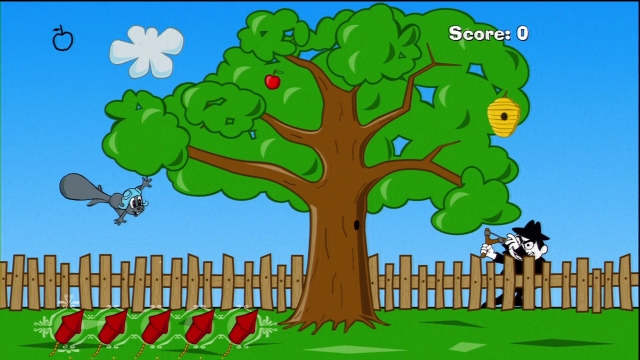 Well, Zen Studios successfully screwed up this vital aspect in almost every way possible. Rocky and Bullwinkle's gameplay is devoid of any semblance of fun, providing players with "obstacles" that even a five year old might find insulting. Wanna keep a clown balanced on a ball that barely wobbles? Or maybe nonchalantly rotate the left analog stick to win a race? Those are just the type of situations you constantly endure here. There's instances of microgames with timed button presses, but you don't get penalized for hitting the button beforehand. So, basically, you can mash the button the entire time... Now, probably the most difficult games include hitting the left and right triggers nonstop, since they can only recognize a specific, fast rhythm I can't seem to figure out. However, they're too few and far between, that, and it's depressing how I have to resort to using microgames with "broken" patterns as, to use the terms very loosely, challenging and entertaining examples.

You think with a goal of completing 175 microgames in order to beat Rocky and Bullwinkle, Zen Studios would go through the trouble of creating enough to sustain the whole package. They don't, so you're stuck repeating microgames countless times in each stage. Stunningly, the free trial version does a fantastic job representing the full game in this area; every five or so levels, an easy sidescrolling game, involving collecting cakes while traveling to the moon, crops up. When it popped up for the fifth time, I was frustrated, then literally said "@%$# the moon!" before abruptly quitting the session. Later that day, I purchased the full, 800 MS points version. WHY?? Well, I'm a cat with a bad habit concerning train wrecks and videogames, where I'm willing to suffer rather than miss an "opportunity". Case in point: I wanted to reach level 99 in the absurd My Hero for the Master System. I was labeled a masochist for the effort.

Not surprisingly, Rocky and Bullwinkle is another sad instance of developers misusing a license, thinking that providing supposed fanservice is the most effort they can get away with. Zen Studios kinda did a half decent job with the presentation, showing numerous clips, an abundance of voice samples, and displaying inconsistent character designs that stay in spirit with the show's animation being outsourced to a Mexican studio. Though, at the same time, it feels like Zen Studios used that as an excuse to be lazy with the visuals; a lot of images don't even animate when you move them around, and I'm not exaggerating when I say the graphics look like they were drawn in MS Paint, giving the impression you're playing an amateur flash title on Newgrounds. And that right there is the problem: it's a $10 flash game that's boring. Now that's an accomplishment. 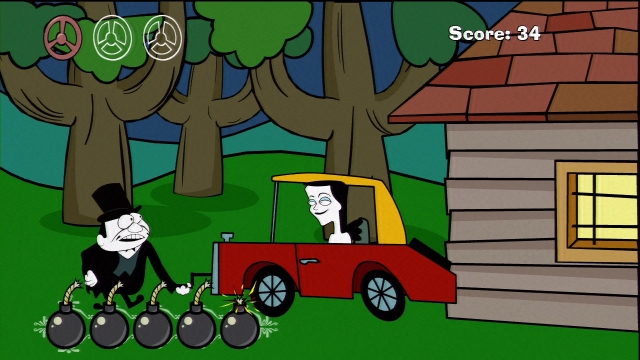 If you enjoyed this Rocky and Bullwinkle review, you're encouraged to discuss it with the author and with other members of the site's community. If you don't already have an HonestGamers account, you can sign up for one in a snap. Thank you for reading!

© 1998-2021 HonestGamers
None of the material contained within this site may be reproduced in any conceivable fashion without permission from the author(s) of said material. This site is not sponsored or endorsed by Nintendo, Sega, Sony, Microsoft, or any other such party. Rocky and Bullwinkle is a registered trademark of its copyright holder. This site makes no claim to Rocky and Bullwinkle, its characters, screenshots, artwork, music, or any intellectual property contained within. Opinions expressed on this site do not necessarily represent the opinion of site staff or sponsors. Staff and freelance reviews are typically written based on time spent with a retail review copy or review key for the game that is provided by its publisher.