From the esteemed makers of Avatar Farm Online, and Shooting Gallery 2, comes a game so obviously ripped from Slender: the Eight Pages, it doesnt even really bother to change the blurb. Imagine, if you will, being thrust into the midst of a dark woods, with only a flickering flashlight for company. Theres something out there that wants to do terrible, terrible things to you, and the only way to stop it is to collect eight items scattered out there in the dark unknown. Tape recorders in this case; your journalist friend planted them, but hes probably dead now, so dont worry about him.

Worry, instead, about the luminous white Res Evil licker that chases you around the strange plot of land in rural France. Stalky Licker guy is no Slenderman; catching a glimpse of the long, faceless chap in a fine suit during his game is often rife with uncertainly. Was that a glimpse of a supernatural mass murder you captured in the corner of your flashlight, or was is an errant tree branch or the briefest flash of an unfortunately shaped support post? Theres no time to double check; hang around any longer, youll probably be dead before youre sure one way or the other. Stalky Licker guy glows in the bloody dark. You know heres there by the image of himself he burns into your retinas. White Noise copies everything but Slenders terrifying subtlety. Its much more direct in trying to scare you. And while, I expected to tear the game to shreds based around this discovery, I cant. White Noise took no longer than a minute and a half to scare the crap out of me.

The premises and locations share so many similarities that the kindest comparison that can be made would be homage. Yeah, its not; its a shameless rip-off. But, its a very well executed rip-off that more or less captures everything that made Slender the surprise horror package it was. As such, White Noise taps into that primal fear that comes from running away from an evil you have no hopes of stopping, but completely takes away that sliver of delusion. In both games, the smart man runs like a girl at the slightest hint of doubt. In one game, youre kinda maybe safe, it may not have been him. In the other, theres no illusion guarding the depths of boned youve just become.

White Noise then goes and creates a fantastic environment that puts Slenders pokey woodland to shame. Sure, both mostly feature trees (mostly), but rather than having pointless locations like an out-of place public restroom, there are surreal lines of cheruby lion statutes, giant white stone faces and  a pointless out-of-place hut that may or may not be a public restroom. On my first play through, Licker guy cornered me in it, and made me scream at the TV. It knows what it did. 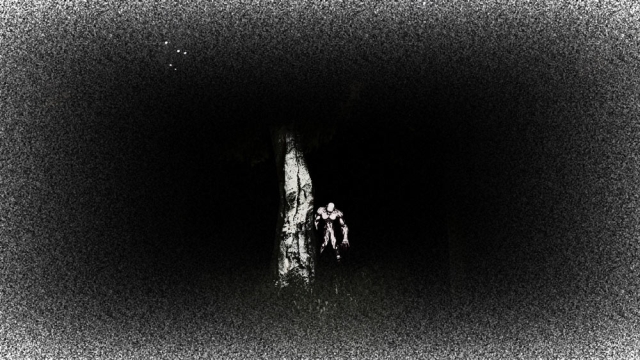 It helped that I played in the dark with surround sound on, but that a Live Indie game is able to take advantage of such things so well is a hugely unexpected boon. The simple stuff, like the swishing of grass as you walk, or the chirping of crickets, appears all around you. A stream runs through the middle of the plot, providing an almost relaxing listening distraction. Then, at some point, a lone, solitary bells sounds solemnly in the background, but it never seems to come from the same place, disorienting and confusing you. Manage to grab half the recorders, and an Akira Yamaoka-like track whispers in the background. Screams sometimes randomly peace the mumbling silence. When you run -- and, believe me, youll run -- your panicked sprints will end in a breathless cough.

For the longest time, White Noise seems to build upon the foundations it opens steals, changing just enough to improve on some things, and alter other just enough to make it seem its own. Looking behind you is a sure fire way to make yourself jump, as Licky makes it a habit to almost always be there, watching from the tree lines. Turn your torch beam off, hope you still have enough air in your lungs, and leg it. Problem is, at some point, youll need to stop and turn the beam back on, should you want to advance. Theres always a good chance the first thing you see will also be your last. You can never accuse White Noise of being original, but thats okay; its sure as hell effective.

If you enjoyed this White Noise: A tale of Horror review, you're encouraged to discuss it with the author and with other members of the site's community. If you don't already have an HonestGamers account, you can sign up for one in a snap. Thank you for reading!

© 1998-2022 HonestGamers
None of the material contained within this site may be reproduced in any conceivable fashion without permission from the author(s) of said material. This site is not sponsored or endorsed by Nintendo, Sega, Sony, Microsoft, or any other such party. White Noise: A tale of Horror is a registered trademark of its copyright holder. This site makes no claim to White Noise: A tale of Horror, its characters, screenshots, artwork, music, or any intellectual property contained within. Opinions expressed on this site do not necessarily represent the opinion of site staff or sponsors. Staff and freelance reviews are typically written based on time spent with a retail review copy or review key for the game that is provided by its publisher.