Look, I'm not gonna pussyfoot around the subject here. DmC is easy. It's very easy. I'm not even close to a series fanatic and I made it through the game's first half without so much as using a healing item, and even once I started dying, I was still blazing through missions with SS ranks. DmC has the usual string of difficulty settings (up to and including Hell or Hell, in which Dante dies in one hit), but if you care enough to unlock them in the first place, you'll likely have more than refined the necessary skills along the way. Frankly, the game's toughest battle (against a news anchor who's clearly meant to resemble Bill O'Reilly and claims to be "just doin' God's work") isn't even challenging for a good reason  the fight is so visually busy that it's difficult to tell what's going on, what you're supposed to be attacking, what you're supposed to be avoiding. I know a lot of heat has been thrown in DmC's direction since the reboot was first revealed, and if your biggest concern was that Ninja Theory would tone it down for more casual audiences, your fears weren't unfounded.

From the perspective of someone who rarely replays games and doesn't particularly like to be frustrated anyway, I don't really mind. And after Devil May Cry 4, I'd much prefer an easy game that was made by people who actually care. Dante's reimagining was predictably met with disdain by longtime fans, but the last time we saw him, he was relegated quite nearly to supporting character status in his own game. And Capcom couldn't even be bothered to hook him up with his own unique set of missions, instead forcing him to traipse backwards through the levels previously scoured by Nero (who himself was essentially a younger Dante with a demonic grabby hand). DmC  that's DmC: Devil May Cry, in case you were wondering  retains the combat that made the series popular but, in stark contrast to the previous release, embellishes it with confidence, audacity and newfound visual majesty. The series creator moved on ages ago to reach greater heights; maybe it was time the series itself did, too. 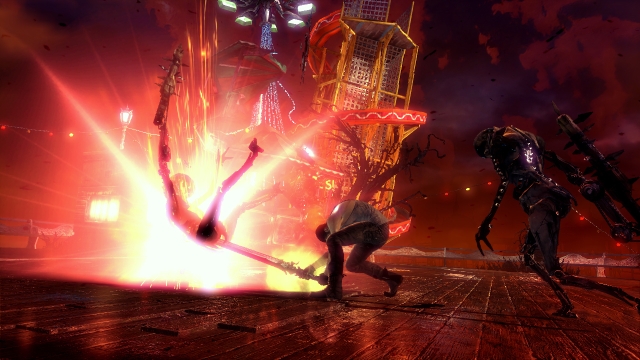 It may be a stretch to call DmC "greater" on any significant level because, like I said, the core mechanics are still identical at a glance: a mix of swordplay and gunslinging with an emphasis on juggles, airborne combat and general spectacle (i.e. earning points for looking good at what you're doing). Ninja Theory's little flourish is that you can use the triggers to toggle two other fighting styles: left for area-sweeping moves, right for power attacks. The team's previous stab at the hack-and-slash actioner, the not-especially-great Heavenly Sword, used a similar system, but DmC easily trumps that title for depth. It may lack the out-of-the-box versatility of Bayonetta (which I think we can all agree is the current standard for this genre), but having multiple weapons for each attack style, each with their own skill trees and all instantly accessible in-game via the d-pad, gives players an awfully wide range of options on the spot.

It plays out as you might expect. Angel Mode is used to plow through groups of enemies at once, Devil Mode rips through shields, and players concerned about their end-of-mission stats would do well not to spam the same handful of attacks repeatedly. The game only ever slows when you're fighting enemies that are vulnerable to specific attack types, since limiting players to a single move set at any given time robs DmC of its flexibility and forces you to get a bit button-mash-happy. Even then, the game redeems itself when it pits you against both angelic and demonic foes at once and has you frantically switching between the two modes, only able to hold one enemy at bay at a time. You won't die often in DmC, but that doesn't mean casual fans such as myself will be able to sleepwalk through it.

Another gamble with mixed results is the new pair of grapple abilities, which can be used to either pull enemies toward you or pull yourself to them. Ripping shields out of your adversaries' hands is a useful tactic, and successfully clearing a room full of airborne enemies without ever touching the ground never gets old, but the lack of any sort of targeting system means that the move is a bit of a shot in the dark when faced with any more than a couple of enemies at once. The grapple has another major use, though, and it's in DmC's surprising emphasis on platforming, which not only prevents the game from simply being a succession of battles on flat surfaces but is surprisingly enjoyable in its own right. Clearing a complex, intimidating-looking jump puzzle with a series of well-executed button combinations is the sort of thrill usually reserved for Prince of Persia games but feels surprisingly at home here.

In fact, I'm stunned by how well-rounded DmC is, considering that depth and refinement have never exactly been Ninja Theory's strong points: Heavenly Sword was bland across the board, and none of Enslaved's many individual genre influences would have stood up on their own. Both games were made worthwhile by the team's unusual focus on strong storytelling, and while DmC can't make the same claim, it doesn't need to. Maybe having an established framework was all it took (and, admittedly, I would like to see them take a few more risks with the series' next entry), but whatever the case, DmC is Ninja Theory's most accomplished and outright enjoyable game to date.

Still, aside from some expectedly phenomenal motion capture work, it's a shame that Ninja Theory's usual storytelling expertise is nowhere to be found. I was never a huge fan of the original Dante, but the new version is no shining jewel of characterization, either. His arc is predictable, and any attempts to expose new layers clash with the fact that he's still the sort of person who will (for example) answer the door butt naked and then change into his clothes in midair while his trailer is being flipped over. And then there's DmC's satiric shots at consumerism, religion and conservative media. The idea that a corporate-controlled world is being administered behind the scenes by a hellish, demon-infested alternate reality could have worked if it weren't laid on so thick and comprised of so many clichés (like an energy drink with populace-controlling effects). Ninja Theory apparently once again had screenwriter Alex Garland on hand as a story supervisor, but you'd never know it. This is broad, messy, unsubtle stuff. 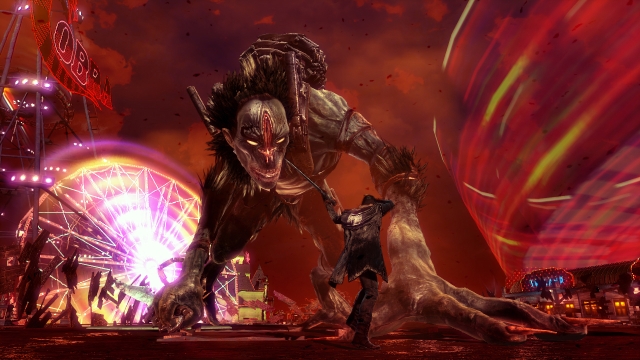 But while DmC may be missing Ninja Theory's usual knack for telling rich stories, it retains the studio's other important trademark, which is a keen eye for striking visual design and vibrant colors. Limbo, the demonic alternate dimension in which most of the game takes place, looks absolutely extraordinary. Ninja Theory's artists understand that grim-and-gritty need not translate to drab browns and greys, as DmC is composed of a rich palette of greens, blues, reds, and everything in between. What's especially important is the team's emphasis on three-dimensionality and complete intolerance for static backdrops. The levels are constantly contorting, stretching, ripping apart and reassembling as you're going about your business. Screenshots don't even come close to doing DmC justice; I cannot remember the last big-budget release that looked so arresting, that crackled with such visual energy.

Maybe it's a tough sell to label a game's look as one of its biggest draws, but it underlines what is, for me, DmC's primary selling point: it's always interesting. It's always moving, constantly hurrying you from stunning vista to intense battle to spectacular set piece to over-the-top (but not quite overachieving) boss battle. That's key for an action game. Complain all you want about the tame difficulty and fewer incentives for replays, but Devil May Cry 4, no thanks to lazy level design, was barely able to hold my attention for a single playthrough, let alone multiple runs. DmC has no boss rush, no ridiculous board game, no recycled mission layouts. There's a rather trite puzzle sequence near the end of the game that stands out for being the only time DmC spins its wheels, and the fact that it's otherwise so consistently exciting shows how far Ninja Theory has come since the days of Nariko.

And reinvigorating the series with this sort of energy is precisely what a reboot should do. Has the combat received a massive overhaul? No, but it didn't need one. Is the story anything special? Certainly not, but that was never the point anyway. Ninja Theory's obvious affection for their products has gone a long way in making Devil May Cry feel fresh and exciting again. It's a shame the people at Capcom seem to have lost so many fans in the transition, but they can take comfort in knowing that they've gained at least one.

If you enjoyed this DmC: Devil May Cry review, you're encouraged to discuss it with the author and with other members of the site's community. If you don't already have an HonestGamers account, you can sign up for one in a snap. Thank you for reading!

© 1998-2021 HonestGamers
None of the material contained within this site may be reproduced in any conceivable fashion without permission from the author(s) of said material. This site is not sponsored or endorsed by Nintendo, Sega, Sony, Microsoft, or any other such party. DmC: Devil May Cry is a registered trademark of its copyright holder. This site makes no claim to DmC: Devil May Cry, its characters, screenshots, artwork, music, or any intellectual property contained within. Opinions expressed on this site do not necessarily represent the opinion of site staff or sponsors. Staff and freelance reviews are typically written based on time spent with a retail review copy or review key for the game that is provided by its publisher.