I think the reason we're all so hesitant to call Anarchy Reigns a sequel to MadWorld  which it is, by the way  is that despite featuring a nearly identical control scheme and most of the same cast of characters, the game has been stripped of nearly everything that made Platinum Games Wii exclusive so immediately striking. Proposing a follow-up to an underselling cult hit and then removing that which made it a cult hit in the first place is a bold move, but that's about the extent to which Anarchy Reigns and "bold" can be used in the same sentence. The stark black-and-white visual style has been scrapped in favor of a standard color scheme in which everything looks as you'd expect it to (except for the blood, which is now blue for some reason and barely registers as such). Also gone with the blood is the bloodiness, the emphasis on finding creative and sadistic means of disposing of your enemies. You won't be golfing with zombie heads or launching human fireworks in Anarchy Reigns. One battle is even tantalizingly situated next to a jet engine, but alas, you are given no one to toss into it.

That's all good and fine, of course. Plenty of games have succeeded without disembowelment being the central mechanic, but it means Anarchy Reigns has to stand on its combat alone. And as a straightforward beat-'em-up, surprisingly, it's not bad at all. The move set is standard but robust, merging your basic two-button "quick attack, strong attack" setup with character-specific weapons, such as Jack Cayman's iconic arm-mounted chainsaw. What's important is that the game is fast and relentless enough (something MadWorld never was) that even on the default difficulty, you can't count on going on a button-mashing offensive without getting friendly with the game's block and dodge moves as well. Fights against some of Anarchy Reigns' more menacing foes play out like complicated dance routines. 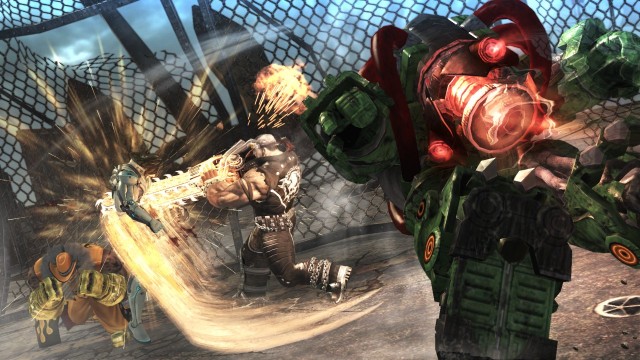 The make-or-break factor for a lot of people will be that there's often a lot going on in Anarchy Reigns. Battles frequently involve dozens of combatants at once, and Platinum didn't skimp on variety in enemy types: guys with flamethrowers, ogres swinging massive hammers, armored cars, attack helicopters, shielded drones, and so forth. The game also has a habit of throwing wild cards your way, with carpet bombings that force you indoors or black holes that randomly transport you about levels. One of the first times I battled a mutant  one of the many adversaries in Anarchy Reigns you won't be ready for  I was within an inch of my death and only saved, I'm pretty sure, by a runaway semi-truck that just happened to be rolling through the arena at that precise moment.

So it's all very hectic, and matched with a lock-on targeting system that takes some getting used to and a camera that, honestly, has a bit of trouble keeping up at times. I can see some players being overwhelmed by the whole experience. The surprisingly versatile move set prevented me from ever feeling cornered, however. The game's many frustrations are usually followed by epiphany. Oh, that would have been a good time to use Rampage mode. Wow, I should really block more as I'm approaching ranged-attack enemies. Gee, I should not try using grab attacks during that stage of the fight. Anarchy Reigns tends to be lenient with retries, but even when it isn't, the act of dusting yourself off and starting over from scratch is never demoralizing when there's this much beneath the surface. It's also worth noting that the game never really loses steam in spite of how repetitive it is, at least structurally. That speaks volumes for its core mechanics.

Having said that, I do take issue with Anarchy Reigns' progression, namely because you can only unlock the campaign missions by earning points in the sandbox levels. MadWorld did the same thing, but its arenas were playgrounds full of meat grinders and industrial fans and the like. The fact that experimenting was already the games major draw meant that setting players free to do whatever they wanted worked. But aside from replaying optional missions and clobbering waves of randomly-generated enemies, there's really not all that much to do in Anarchy Reigns' mere handful of levels. It's not usually a problem if you're decent at the game, since gold and platinum medals tend to award enough points to make grinding unnecessary, but it can occasionally bring the game to an annoying halt if you screw something up and underperform.

It's a bit unfortunate, as well, that Platinum forces you to complete the campaign twice  with the two protagonists completing slightly different missions but still following the same path  to see the story to its conclusion. It's even more unfortunate that the story isn't really worth the trouble in the first place. Not that I expect Platinum to have John DiMaggio and Greg Proops on hand to commentate for every game they release, but with MadWorld's sense of humor gone, the plot devolves into a self-serious, nonsensical entry in what I'd like to start calling the "nanomachinecore" genre. The characters have no panache, either; Jack has been reduced to a generic antihero, Black Baron is a stereotype now free of irony, and you could ascertain everything you need to know about the new characters (most of whom exist to fill out the multiplayer roster) simply from their appearances. 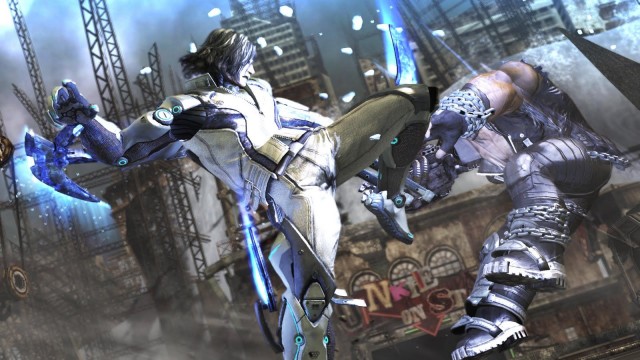 Of course, if the campaign's Game Boy Advance-style "two talking heads with a text box" cutscenes turn you off, you could always give the online modes a shot. Then you could get your ass kicked and scurry back to the campaign.

In all seriousness, I've heard Anarchy Reigns being compared to Power Stone quite a bit, which makes it easy for me to understand why the multiplayer holds so much appeal for most of the people playing it. As only a casual brawler fan, though, the game's combination of hectic action with the overly competitive nature of the online community and a not-terribly-intuitive matchmaking system (which doesn't do an outstanding job of balancing teams) was a bit too much for me. Most of the campaign's key battles pit you against the multiplayer characters, anyway, and it's got the added bonus of giving you more structure and control. Those willing to take the time to master the game's mechanics will find a lot of value in Anarchy Reigns' multiplayer, but for those like me who want to take it at their own pace, the campaign more than suffices.

And maybe that's the game's strength. What it does well  fast, crunchy, satisfying combat  it delivers in surplus, whether you're there for an online or solo experience. It's big, silly fun no matter what you're looking for, and its status as a bargain bin title makes me feel obligated to recommend it despite some cut corners, because let's face it  even a low-budget, small-scale follow-up to MadWorld is still more of a follow-up than we ever expected. Anarchy Reigns takes the style, audacity, humor and helicopter-throwing lunacy out of its predecessor, then demonstrates that even without those things, it was still a pretty solid beat-'em-up. Do check it out this time, won't you?

If you enjoyed this Anarchy Reigns review, you're encouraged to discuss it with the author and with other members of the site's community. If you don't already have an HonestGamers account, you can sign up for one in a snap. Thank you for reading!

© 1998 - 2022 HonestGamers
None of the material contained within this site may be reproduced in any conceivable fashion without permission from the author(s) of said material. This site is not sponsored or endorsed by Nintendo, Sega, Sony, Microsoft, or any other such party. Anarchy Reigns is a registered trademark of its copyright holder. This site makes no claim to Anarchy Reigns, its characters, screenshots, artwork, music, or any intellectual property contained within. Opinions expressed on this site do not necessarily represent the opinion of site staff or sponsors. Staff and freelance reviews are typically written based on time spent with a retail review copy or review key for the game that is provided by its publisher.