Silent Hill was exceptionally scary. Its not aged well, we can all agree with that, but it dared do more than just jump out of the shadows and yell Boo! at passing gamers. It got right in your head by giving you a perfectly normal slice of everyday life, perverting the hell out of it, and then never really letting you know why. You got hints, you could form theories, but the core of the game was a shapeless, formless, patchwork of terror. You didnt know why all these awful things were happening to you; you just knew they were happening. With nothing to blame, with nothing to ground the events against, you just had primal fear. It got under your skin, in your veins, behind your eyes. It stayed with you long after you powered down your Playstation.

Of course, in order to provide the gamer some sense of closure, answers would have to be offered at the conclusion. But thats okay; you saw the man behind the curtain, and everything made awful, terrible sense. With the sick atrocities of Silent Hill laid bare, the entire macabre picture was completed. What, then, was left to explore?

Unlike pretty much every other update to the series, Silent Hill 2 brilliantly side-steps this issue by no longer asking Where am I, and why is this happening? by instead posing the more direct question of Why is this happening to me? James Sunderland has a history with the sleepy little town of Silent Hill; he and his wife vacationed there just before the onset of her fatal illness started slowly devouring her. It was the last truly happy memory the couple shared before their lives became one long corridor of hospital visits, intensive care and insignificant drug programs. We find him in a dilapidated public toilet, re-reading a cryptic letter claiming to be from his dead wife, inviting him back to meet her at their 'special place'. 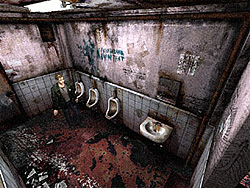 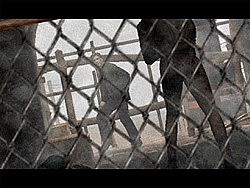 Much like Harry in the previous instalment, James isnt a fearless protagonist; hes a bundle of nerves, understandably scared stiff by the contact from his long-dead spouse but driven on by the need to find answers. While he stumbles along the deserted, foggy streets, stepping over the odd mangled corpse and treading paths that seem to stretch into forever, you'll slowly learn that his hell is much more personal. Harry rode sidecar in Cheryl's twice damned road to broken redemption, picking through her nightmares without any real understanding. It was sad tale about unconditional love and the enforced bravery of a man willing to drive himself slowly mad in the name of his child. James doesn't have the luxury of being a passenger; his reason to brave the unwelcoming world of swirling fog, rotting dreams and dangerous intentions is a spouse long dead and a nagging sense of unplaced guilt. In the first Silent Hill, the town wormed its way into Harry's mind on a dangerous drip feed. In Silent Hill 2, it has its awful hooks dug deep into James' flesh from the word go.

Silent Hill 2 switches focus, and instead become primarily about poking at James' subconscious, dredging into his fears and apprehensions, unearthing forgotten nuggets of recessed memory and personal holocausts to then gleefully manifest and have parade around him. Really, if Silent Hill was the awful origins story of the mad little town, Silent Hill 2 is nothing more than it reaching out to a select few disturbed people, then driving them insane for little other reason than because it can. This imagining of the town is more malicious, more cerebral than the previous chapter where it had to turn more and more defensive, and, in being granted a free hand at mangling its victims without fear of reprisal, it's more awful than ever. It drags images, fears and regrets out of James' mind, then has them stroll around the town for the world to see. It's not just a case of trying to survive the twin worlds of fog-covered hell, and the blood-soaked otherworld that's heralded with waling sirens and unspeakable dread; the town changes right along with James.

This mechanic runs perpendicular throughout, even effecting the eventual ending not with the usual tally of moralistic choices, but by the simple actions chosen throughout the game. It might be simple actions like how often James explores the town, or if he allows nothing to slow his search for his wife. It might change everything should James treat other characters well, or spend too much time dwelling on any of the macabre collection of items he stumbles upon throughout his journey. The damage he takes, his preferred methods of self defence, they all take a toll on his eventual fate, should he be fortunate enough to make it that far. His radio still has a habit of hissing static while ungodly demons creep out of the gloom, and though he's more capable a fighter than poor Harry was, he's still a scared, confused man fighting impossible evils with a length of wood or a rusting pipe. Whether this is good or bad is up for debate, but it's important to realise that monsters in the dark isn't what Silent Hill 2 is about; it's the effectiveness of the creeping interactive tale, the realisation of how it all fits together. The part played by the disturbed humans also seeking answers within the fog, or the conundrum of the little girl wiggling nonchalantly through it all like it was all a horrible hallucination she's not privy to. 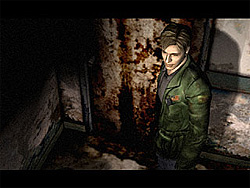 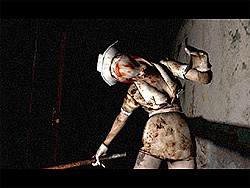 And through it all, shepherding you along with a knife the size of a grown man, trudges Pyramid Head, he of the massive triangular metallic helmet, gore-stained apron. He with the fondness of necrophilia and bursts of unpredictable violence. Sometimes, he'll just lurk at the back of the screen, ignored by the shuffling mannequins, the double-folded lower limbs and rotting nurses. Sometimes, he'll gently mock you, making you watch his barbaric displays, too scared or unable to escape while he applies his trade. He's always there to sever any connections you try and form with the rest of the cast driven slowly mad by fear and panic, often announced by the tortured wails of metal on metal as he drags his impossibly large weapon around, getting louder, drawing closer. He's never too far away, seemingly drawn to James' plight at the most inconvenient of times. He's more, so much more, than a random monstrosity.

Silent Hill 2 is, at heart, a majestic slow burn reveal to a shocking conclusion that's fed to you on an almost perfect drip feed. It never rushes, never shows its hand too much, but extends chilling tendrils into your mind and down your spine. It blesses you with an awful understanding of the town's malicious goals, tainting them with bitter-sweet atrocities, not leaving anything pure in its wake. And then it digs a little deeper, seeps into bone and marrow, and it doesn't let go. It's a wonderful suffering, a beautiful nightmare worth every shudder and scream it can wring.

If you enjoyed this Silent Hill 2: Restless Dreams review, you're encouraged to discuss it with the author and with other members of the site's community. If you don't already have an HonestGamers account, you can sign up for one in a snap. Thank you for reading!

© 1998-2021 HonestGamers
None of the material contained within this site may be reproduced in any conceivable fashion without permission from the author(s) of said material. This site is not sponsored or endorsed by Nintendo, Sega, Sony, Microsoft, or any other such party. Silent Hill 2: Restless Dreams is a registered trademark of its copyright holder. This site makes no claim to Silent Hill 2: Restless Dreams, its characters, screenshots, artwork, music, or any intellectual property contained within. Opinions expressed on this site do not necessarily represent the opinion of site staff or sponsors. Staff and freelance reviews are typically written based on time spent with a retail review copy or review key for the game that is provided by its publisher.