I'm going to describe a game and you're going to name the first one that pops into your head.

In the game I have in mind, you're a silent protagonist. You come to and find yourself trapped in a large and seemingly desolate facility full of intricate security systems and malfunctioning equipment, all of it rendered with simple colors and sleek curves. The only other immediate presence is that of an unseen, quirky administrator who addresses you over the building's loudspeakers with a frequently condescending but humorous tone. You find a prototype device that allows you to manipulate the physical world around you and are tasked with solving a series of puzzles that generally involve lasers, cubes, and other various equipment. The aforementioned overseer guides you through the basics while berating you in a distinct, identifiable voice and discussing the history and rules pertaining to the institution.

There's no getting around it: Quantum Conundrum wants to be the next Portal. The fact that it was headed by Kim Swift, one of the creators of Valve's surprise pop culture phenomenon, does not excuse it from needing to establish its own identity.

That puts me in a tricky spot, because I actually like Quantum Conundrum. As a puzzler, it has a unique central mechanic and a mostly clever application of said mechanic, barring a few hitches. It has an abundance of moments in which players will be stumped for long periods of time only to finally say, "Oh, of course that's what I'm supposed to do!" It's fun, and that's all that should matter. Yet everything else about it, from the way it looks to the story it tells, feels so hazily me-too  so interchangeable with so much else on the indie market  that it's hard for me to work up much enthusiasm for it. And if Quantum Conundrum can be excused of being a copycat by virtue of it coming from the same creative mind, then we'll simply say that Swift has tried to strike gold twice in the same location, years after the mine has been stripped bare and the supports have collapse in on themselves. 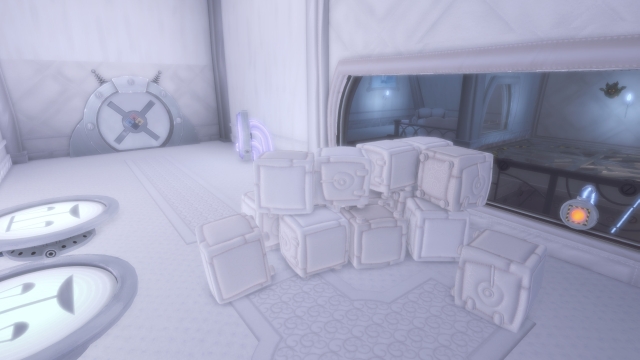 Still, the central gimmick does a lot to support the resulting game. As a child trapped in his uncle's manor after an experiment has apparently gone wrong, you're given a glove that allows you to change the physical properties of the objects that surround you. At first youre able only to manipulate their mass (the "fluffy" dimension makes items ten times lighter, while the heavy dimension turns everything to metal), and later on, you're able to slow time to a crawl and reverse gravity as well. Developer Airtight Games absolutely nails the learning curve. Opening puzzles are simple in nature (like one that asks you to throw a light object and then make it heavier in midair so it'll break through a window), but the game introduces new mechanics at such a rapid-fire pace  an industrial fan here, a trampoline-like device there  that your interactions with them are expected to become second nature mere moments after you first learn what to make of them. When time and gravity manipulation come into play, Quantum Conundrum often becomes deviously complex to the point that I wonder how a human being is even capable of creating this stuff.

While it's not a long game, Quantum Conundrum is a meaty one that wastes no time before dropping players into properly mind-bending stuff; Portal's slow pace, despite the game being only three hours long, is one of the few things it was criticized for, so kudos to Swift for learning. And if any other positive comparisons to the game's obvious inspiration can be drawn, Quantum Conundrum wonderfully emulates Portal's satisfying physicality. In a typical puzzle game, you overcome challenges by "solving" them, but here, simply figuring out what you're supposed to be doing is half the battle. The game's best moments have you switching between the four dimensions in quick succession, often while throwing objects around or engaging in some very tricky platforming. Completion of a task is often a feat of multitasking; your fingers do one thing while your mind is already focused on the next step.

Of course, with the game demanding so much precision in movement, there's the obvious problem that the mouse-and-keyboard setup just isn't ideal for platforming, especially when we're tasked with juggling four different functions that are all mapped to keys confusingly laid out around the WASD area. Despite on-screen indicators clearly spelling out which dimensions are mapped to which keys, I never felt entirely comfortable with the controls. Quantum Conundrum will be released on Xbox 360 and PS3 in a couple of weeks, and I strongly suggest holding off for either of those versions, as I can imagine the game playing much more fluidly with a controller.

There's another issue, however, that time won't fix. When physics puzzles are the name of the game, you've got to make sure that the physics engine in question is reliable, and Quantum Conundrum's isn't. Seeing your best-laid plans go awry because one object didn't interact with another in quite the manner you expected it to is infuriating beyond words, and during the insanely difficult puzzles in the game's final act, quirks like these can seriously put a dent in your ability to keep your cool. I accept that frustration is a natural product of challenge, and there's plenty to be had in Quantum Conundrum even when everything is going smoothly, but needless frustrations at the hands of an engine simply not working the way it's supposed to aren't forgiveable. It would be enough to stop the game in its tracks had it been a more frequent issue. 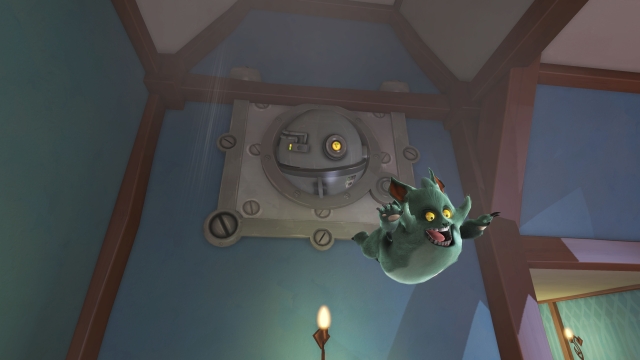 These occasional hiccups are nothing compared to the glaring miscalculations in the game's presentation, however. This is the point at which the Portal comparisons stop being favorable, like when Airtight employs the same "omnipresent narrator" trick with nowhere near the success. Professor Quadwrangle is certainly a "personality," and John de Lancie plays the role well, but nothing he says is ever funny or memorable. It's a one-joke character, and being pointlessly condescending isn't a great joke to begin with. Similarly, the game's visual style is cartoonish and exaggerated, yet at the same time hollow and completely indistinct; there's not a single image in the world that I would see and immediately associate with Quantum Conundrum. There's a little green imp named Ike who seems to exist for the sole purpose of giving the game a "face," because he serves no other function. He just shows up from time to time, makes weird noises, and then vanishes. It's saying something that Valve can make us feel affection for an inanimate cube with pink hearts stamped all over it simply by wedging it into the player's progression arc, while Airtight struggles to give a cute creature like Ike any reason to exist.

On top of all of that, the music is absolutely terrible. Bouncy and upbeat without ever being catchy or hummable, it's just obtusely there without adding anything. As with everything else in the game's presentation, the soundtrack tries its damnedest to make you smile but can't stick the landing and just comes off as obnoxious.

Does any of that matter? That's a tough question to answer. Games are meant to entertain first and foremost. Taken as a straightforward puzzler, Quantum Conundrum is clever, engaging, and easily worth the $15, even if some control and engine issues often get in the way. But we live in an age in which a game cannot simply drop us into a succession of puzzles with no explanation, nothing to look at, and nothing to listen to. If these elements are essential, then they shouldn't be a hassle to endure. We play games primarily for enjoyment; we play games ideally for the full package, in which interactive and non-interactive elements are married seamlessly, and Quantum Conundrum suffers from a clear divide in quality that prevents it from ever truly resonating. That certainly doesn't stop it from being worth the money, but it's been a while since such a unique game felt so formulaic.

If you enjoyed this Quantum Conundrum review, you're encouraged to discuss it with the author and with other members of the site's community. If you don't already have an HonestGamers account, you can sign up for one in a snap. Thank you for reading!

© 1998 - 2022 HonestGamers
None of the material contained within this site may be reproduced in any conceivable fashion without permission from the author(s) of said material. This site is not sponsored or endorsed by Nintendo, Sega, Sony, Microsoft, or any other such party. Quantum Conundrum is a registered trademark of its copyright holder. This site makes no claim to Quantum Conundrum, its characters, screenshots, artwork, music, or any intellectual property contained within. Opinions expressed on this site do not necessarily represent the opinion of site staff or sponsors. Staff and freelance reviews are typically written based on time spent with a retail review copy or review key for the game that is provided by its publisher.