Inversion is a third-person cover-based shooter, and I'd wager that you've figured out by now whether or not you're into that sort of thing. If you're not, it probably goes without saying that Inversion won't turn you. Hell, I dig cover-based shooters and I barely liked it. This is precisely the sort of game for which the five-out-of-ten score was created, as nearly everything about it is competent and inoffensive yet completely phoned-in, from its barebones audiovisual presentation and perfuntory plot to its derivative gunplay. It has enough interesting ideas to occasionally intrigue you, and enough frustrating, poorly-executed sequences to pull you back to reality. It's no Quantum Theory, but it's certainly no Gears of War, either. Playing it won't ruin your weekend.

I have no strong feelings towards Inversion's basic combat. It gets the job done. You could say that it lacks the perverse punch of Gears  sniping is particularly unsatisfying  but it's functionally sound. I'll even say that the game's liberal use of destructive cover lends the gunplay a frequent sense of urgency, so if you're even remotely interested in this game, the straightforward shooting bits will likely hold your attention. Where Inversion wavers more significantly in quality is in regards to its central gimmick, which isn't a mechanic so much as a concept: gravitational manipulation. You receive a weapon called the Gravlink that allows you to pull enemies out from cover, yank them violently to the ground, or lift and throw various objects. The level design sometimes follows suit by having you jump between different gravity planes or even float around weightlessly for extended periods of time. I'm not sure when development on Inversion began, but I'd bet it was shortly after someone from Saber Interactive watched Inception and imagined the hotel scene making a great video game. 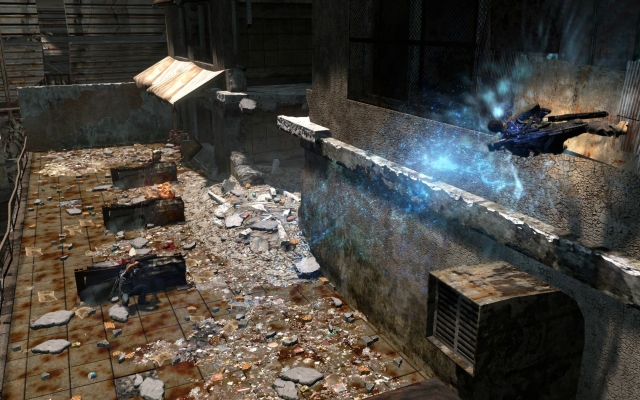 The Gravlink performs the task of elevating the gunplay beyond simple Gears worship, but only just. While it's a neat weapon, it just sort of exists without fundamentally changing how the game is played. At one point, you're tasked with creating cover by ripping storage containers down from suspension wires, and you think, "Oh, that's cool. They're introducing a new mechanic." But while the idea of seeking out makeshift cover in tense situations sounds great, you only ever do this when you need to do it, i.e. when you've got to cross an open area that's guarded by enemy turrets. Inversion's biggest problem is arguably that so much of it feels imitative, so it's especially damning that its few shots at creativity are fumbled because its best ideas are never given any breathing room.

And since the Gravlink is essentially a cross between Mass Effect's biotic powers and Half-Life 2's gravity gun, it has very little punch as a straightforward tool of destruction since we've seen all of this before. Last year's Red Faction: Armageddon was a similarly underachieving shooter that had one huge saving grace: the magnet gun, which was unlike any weapon I'd ever used. It demonstrated that even a blandly-designed game can sail smoothly on the simple hook of letting players goof around with a new toy, and Inversion has none of that.

Then there's the level design. Inversion's box depicts a man trotting down the side of a building. I could probably count on one hand the number of times you actually do that, and again, the idea is given no flexibility  you can only move from one gravity plane to the next via designated conduits, and only in overly linear fashion. A neat idea is reduced, in this case, to a visual gimmick that has virtually no effect on the flow of combat. As it happens, a shootout on a vertical surface is functionally no different than a shootout on the ground, and taking out a sniper who's hanging upside-down above you is no different than killing one who's standing upright. Saber doesn't commit to the distorted gravity idea; it just sort of comes and goes whenever they remember that Inversion needs something to distinguish it from the countless other cover-based shooters on the market.

The zero-gravity segments are the only ones that show any promise. They use disorientation to boost challenge in the same way that Dead Space's zero-G sequences used it to boost horror. These sequences don't control particularly well, as you might expect, but that's fine during gunfights, where you're supposed to be conservative with movement anyway. But while the weightless sections occasionally give Inversion an identity of its own, they're also paired with arguably the game's most unfortunate design choice. See, it's during these sequences that Saber pits you against the game's most overpowered enemies, the melee-only ninja women who can insta-kill you if you fail an unexpected and completely arbitrary quick-time event. To reiterate, Inversion's most difficult enemies to kill are only encountered during its most difficult sequences to control. Some of them strap explosives to their chests and suicide-bomb you. Had I written this review immediately after playing through any of these sections, my score would be several points lower.

On the subject of poor design, here's a tip for developers: If the term "recurring boss fights" can be used in a review for your game, you're doing something wrong. Especially if said bosses do that thing where they hide behind impenetrable shields and send waves of smaller baddies after you in between vulnerability periods. That's lazy design in and of itself, but copying and pasting these encounters to artificially boost Inversion's length is inexcusable in this day and age, and pointlessly aggravating missteps like that are poison to a game that I'd otherwise most charitably describe as "harmless." 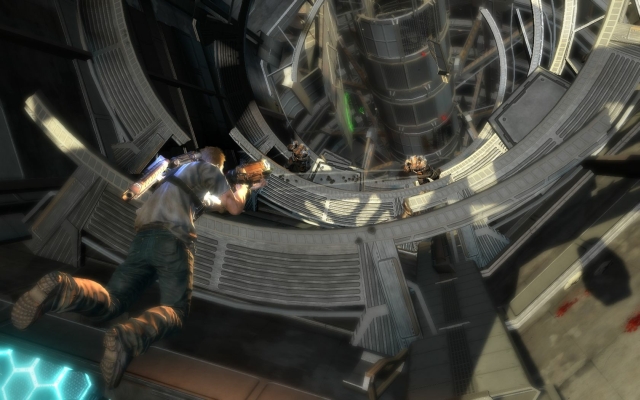 It seems I've almost forgotten to mention the story. In my defense, Inversion almost forgets to tell one. The game centers on a cop who must battle his way through hoards of ugly invaders called "Lutadores" in order to rescue his kidnapped daughter, and it's not until the final act that we're given any sort of context for all of this. Where are we? It looks like present-day Earth, but it's called "Vanguard City," which isn't a real place. And who are the Lutadores? They're mean, they gun down innocent civilians and they speak in an ugly-sounding caveman language, so if a shooter must give us something to kill, they succeed in being worthy of death. But what do they want and where did they come from? We don't see them arrive by spaceship or burrow up from underground; they just sort of appear and start shooting people.

To be fair, most of these questions are addressed through a late-game plot twist that is... well, I didn't see it coming, I'll give it that. But its complete lack of elaboration puts it just above the classic "it was all a dream" reveal on the credibility scale. It's as if Saber began telling the story without knowing where it would end up, eventually opting for the most farfetched, left-field direction possible and hoping players would too greatly admire the writers' audacity to examine the countless plot holes. We live in a world in which Gears of War has become a victim of its own success, yet playing something like Inversion makes you realize that we take for granted what that game did well. The dialog may have been awful, but at least there was plenty of detail and consideration in its universe; the people who created it cared, even if we didn't. Inversion's story, on the other hand, seems to exist only because it needs to. That's a lot better than treating the gameplay as an obligation, as many developers these days seem to, but still.

At the very least, the main character of Inversion is, in stark contrast to Marcus Fenix, a level-headed family man. I like that. I just finished the game less than an hour ago and I can't remember his name. I don't like that.

I'm probably not making the game sound very good, but what do you expect? Everything Inversion does well has been done countless times before, and its several intriguing ideas either reach varying degrees of success or amount to nothing at all. It's a shame Redbox isn't offering it, because dropping a few dollars to punch through this game over a weekend  in a release climate that, let's face it, hasn't been giving us many options  is pretty much the only scenario in which I could see even serious shooter fans walking away with positive impressions. That's my recommendation: Inversion is worth checking out if you're not paying much for it, and if you've got absolutely nothing better to do.

If you enjoyed this Inversion review, you're encouraged to discuss it with the author and with other members of the site's community. If you don't already have an HonestGamers account, you can sign up for one in a snap. Thank you for reading!

© 1998 - 2022 HonestGamers
None of the material contained within this site may be reproduced in any conceivable fashion without permission from the author(s) of said material. This site is not sponsored or endorsed by Nintendo, Sega, Sony, Microsoft, or any other such party. Inversion is a registered trademark of its copyright holder. This site makes no claim to Inversion, its characters, screenshots, artwork, music, or any intellectual property contained within. Opinions expressed on this site do not necessarily represent the opinion of site staff or sponsors. Staff and freelance reviews are typically written based on time spent with a retail review copy or review key for the game that is provided by its publisher.