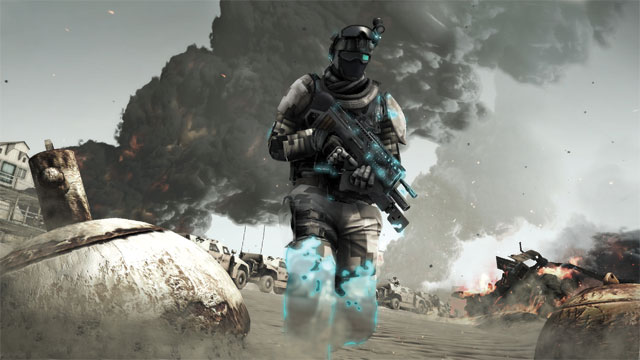 I mean, granted, it's not great active camouflage  your men aren't invisible so much as they look like they're made of glass  but whereas the "advanced" in Advanced Warfighter always seemed to signify little more than excessive HUD clutter to me, the latest installment in Ubisoft's long-running tactical shooter series officially projects the brand into full-blown science fiction territory. And that's important, because Future Soldier carries a number of qualities that should make it indistinguishable from the many, many shooters cluttering the market today: the cover-based combat, the relentlessly brown levels, the militant oorah brospeak, and so forth. Ah, but does your average Call of Gears of Battlefield have x-ray sensors, magnetic vision and a remote-controlled droid that fires mortars and guided missiles?

Future Soldier does bend to the pressures of contemporary gaming a bit too often, and I'll address that in a moment, but the series' blood has always been its tactical undercurrent, and your Ghosts' wonderfully versatile gadgetry propels this in new directions. At its best, Future Soldier is a game in which you use advanced technology to gather information about hostile situations and then work with your team to move forward as quietly and efficiently as possible. You locate and mark enemies using sensors, magnetic sights and a flying drone, and then you coordinate attacks with your fellow Ghosts. You can play the entire (surprisingly lengthy) campaign coorperatively, but if that's not an option, your teammates are piloted by some of the most reliable friendly AI in recent memory. You could play the whole thing by yourself and see no indication that it was designed for co-op.

The game was handled by several of Ubisoft's many development teams, none of whom worked on the excellent Splinter Cell: Conviction from a couple of years ago. That's surprising, because Future Soldier borrows quite a few of its ideas, like the fourth wall-breaking objective headers, the point-and-click system of moving from cover to cover, and the ability to mark targets for instant kills. That last point is particularly important, because you can now order your team to take out up to four enemies simultaneously by tagging them and lining up your shots. Since straightforward gunfire will never be your preferred course of action, taking out guards without setting off alarms is a necessity, and this excellent system allows you to do so in complex situations. You can even do all of the marking with your drone, watching your Ghosts scurry about on ground level while you monitor enemy movement from the air. Rare is the shooter in which the stealthy bits are the most rewarding. 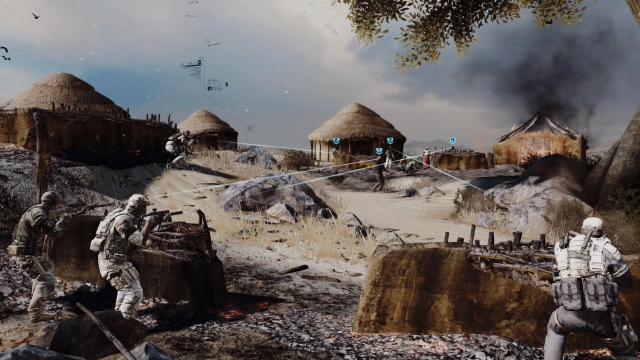 I say "shooter" because, unfortunately, that's what Future Soldier is. We live in an age in which every game needs to be Call of Duty to make a profit  that's what publishers believe, at least  and so the genuinely interesting espionage missions are frequently interrupted by flashy set pieces, tank battles, turret sections, siege scenarios, and so on. I don't have anything against this routine per se, but the combat just... isn't very good. Having to click on the right thumbstick to use ironsights is an archaic extra step in the heat of battle, and moving through cover feels clunky and imprecise. It's all just completely unintuitive, and in such an overcrowded genre, there's no excuse not to get this stuff right.

Of course, the datedness of the gunplay actually works to the game's advantage during the stealth missions, when it actively encourages players to avoid direct action. Clearing an entire area of enemies without any of them ever knowing that they're under attack is a great feeling in its own right, and it's even more gratifying when you consider what the alterative could have been. But since most developers think "raising the stakes" equates to dialing up the gunfire, as the game presses on, Ubisoft continually contrives more reasons to drop the Ghosts into conflict. Hell, sometimes they don't even bother coming up with excuses. There were a number of instances in the campaign's second half in which I was trying my damnedest to work my way through a level without setting off alarms, and everyone would just... start firing. Enemies would engage us when they had no way of knowing we were there, or my teammates would engage the enemy because they forgot what "recon" means.

So not only did Ubisoft delibrately implement design choices that are detrimental to the game, but they occasionally defy logic to do so. Future Soldier often forces action on you as if the game isn't meant to be played any other way. Which, again, would be fine if the shooting were more graceful, or if there weren't infinitely more interesting elements at play. This is the same reason why Future Soldier's multiplayer modes failed to grab me. They just rehash what we've already been getting in every other shooter these days, up to and including the now industry-standard Horde duplicate in which you fight off waves of enemies in an arena. The game's online options are expansive, but if you're into this sort of thing, there's better stuff out there.

And so Future Soldier is one of the very many good games that falls short of greatness because it can't commit to what it does well. When it's firing on all cylinders  and that, I hasten to add, is a great deal of the time  it's one of the coolest stealth action games of this generation, and not entirely like anything else I've ever played. But when it succumbs to cliché, it feels precisely like everything I've ever played. I recommend Future Soldier, but not as strongly as I wish I could.

If you enjoyed this Tom Clancy's Ghost Recon: Future Soldier review, you're encouraged to discuss it with the author and with other members of the site's community. If you don't already have an HonestGamers account, you can sign up for one in a snap. Thank you for reading!

© 1998 - 2022 HonestGamers
None of the material contained within this site may be reproduced in any conceivable fashion without permission from the author(s) of said material. This site is not sponsored or endorsed by Nintendo, Sega, Sony, Microsoft, or any other such party. Tom Clancy's Ghost Recon: Future Soldier is a registered trademark of its copyright holder. This site makes no claim to Tom Clancy's Ghost Recon: Future Soldier, its characters, screenshots, artwork, music, or any intellectual property contained within. Opinions expressed on this site do not necessarily represent the opinion of site staff or sponsors. Staff and freelance reviews are typically written based on time spent with a retail review copy or review key for the game that is provided by its publisher.