Alien Crush is a pinball game, first released for the Turbo Grafix16/PC Engine in 1988 by Naxat. The first game out of four in the Crush series, it has recently been ported to the Virtual Console, and the PlayStation Network. The game features two main screens which are connected vertically, as well as several bonus rooms that become accessible once certain elements in the main screens have been triggered. You are trying to destroy the aliens; there really isn't any story to this. And that's not what we're here for.

The game has a heavy sci fi theme to it, inspired by artist H.R. Giger (also very prominent in the second game in this series, Devil's Crush) and James Cameron's Alien. Unspeakable but formidable alien life forms await you, through the form of extremely detailed graphics which, to this day, still impress. They still stand out not only because of the attention that was put into building them, but also for the originality behind them. A multi eyed alien that barfs spiders, cocoons that break open as your ball hits them, which gradually proceed to unleash things that look like a mix between a sowbug and a fish fly. Creepy elongated mouth things that slowly pop in and out of a wall made of bones...a delicious nightmare. :)

Speaking of which, the decor in the game also has a strong touch of the macabre, adding a little Lovecraftian feel to the game's looks. Skulls and skeletal hands make up the border of the screens' boundaries, a giant brain, and one abomination is a giant skull with tentacles in its forehead. It's a very nice setting, complete with glowing lights and eyeballs, and it includes some backgrounds in the bonus rooms, that are more 'machine' in their nature than your two main screens. These set a good atmosphere for ruin and fear, without actually being depressing. If you enjoy the darker tones of science fiction, you're sure to like this. 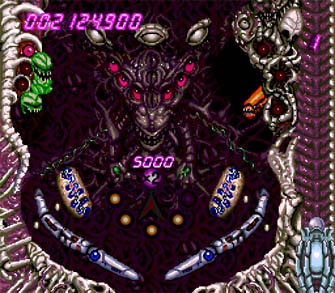 The sound effects aren't quite what you would expect from a traditional pinball game. But this is a good thing, because once again, they compliment the theme and style of the game. You have some boings and bloops, but more often than not you'll be met with cool ''alien crushing'' sound effects. Low key, dragging and disturbing, a pleasant symphony of dread they are. It's also interesting to note that a lot of the sound in this game isn't violent or hyper like you would expect a pinball game to sound like. A lot of it is nearly hypnotizing, and almost soothing. The atmosphere is really kicking, and despite that you hear it over and over, it never seems to get dull.

Which brings me up the music. When you start the game, you're given two track choices to choose from that will play during your game, Lunar Eclipse and Demon's Undulate. Lunar is upbeat and fast, while Demon is threatening, haunting and slower. (the beginning of it sounds like the Jaws theme) Both are very good, and you just can't seem to get sick of them. The tracks given to the bonus rooms are also interesting, as they're peaceful, yet engaging. (personally, I think even the Game Over music is awesome)

While the game's excellent presentation settles a splendid theme, where it really shines is its gameplay. Alien Crush isn't all random and luck based like most pinball, at least not so much. It introduces elements of strategy, and if you want to obtain a nice score, you're going to have to do a lot more than merely trying not to lose your balls. The game has bonus rooms, which usually involve the task of destroying aliens, such as a set of six millipedes that break apart as you damage them, or the elimination of floating skulls and green cyclops spiders which you dispose of by striking them and knocking them into holes. These bonus rooms (four in all) are the key to getting big boosts in your score. However, they require specific actions to access them. For example, the lower screen has three creatures on both the left and right side, and by striking all of them a number of times, the alien in the middle will start flashing and will open its mouth. Get your ball in there, and you'll be led to a bonus room. It's very interesting that the game offers this sort of thing, and there's a certain satisfaction in working the two main screens to access their bonus rooms.

There are other ways in which the game requires you to work in such ways other then getting to the bonus rooms. Getting an extra ball in the game is possible through two different means, one on each screen. (plus another method in one of the bonus rooms) You'll soon find that working for the bonus rooms and the extra balls are vital to your survival, and a high score. It's a very convincing incentive, and a very fun and pleasing one. The gameplay at its core itself is also extremely solid. You have your bumpers, which change their formation once you smack some eyeball around. There's a loop that, if you manage to get through, (after beating up a few eyes) brings up a blocker in between your flippers that protects your ball from plunging below, (more or less, the game is going to make sure you don't become careless) and it all works and flows along nicely. The game can be difficult, but it's also fair, mostly due to the finely honed hit detection and the amount of control you're given with your flippers and how they send the ball around. It's like they become your very hands. After getting familiar with the game, you'll learn that you can gently shove your ball in the direction you want, at least a lot of the time, or you can send it crashing like a madman in some random direction, and enjoy the show. The game can be a very intricate space ballad, or a violent metal concert. You decide. Either way, the game is made so that it wants you to play for a long time, but you're going to have to make a deal with it, and concentrate as you anticipate your progress.

The game also lets you choose from 'slow' or 'fast' before you start. This will dictate the speed that your ball responds too. I personally find that the slow speed is much easier to deal with, and you can control your ball's trajectory a lot better than with the fast setting. All my high scores were obtained with slow. However, slow is...well, just what it says. A game could last for hours, and you need to be patient, and try not to get caught off guard when something happens to make the ball go whizzing around like a psycho for a second or two. However, if you fancy a quick game full of adrenaline, go ahead with the fast setting. The element of strategy which defines this unique game is no less present with the fast setting, it's just a little harder to handle. Both speeds adhere to different tactics and styles, they're almost two different ways to play, as the ball doesn't react the same to its surroundings on the two different speeds. I just happen to do better with slow, and it might be good when you're starting out. But once you get familiar with the mechanics and learn what to expect, you'll have a good idea of how you want to play. I can only stress, the controls are near perfection, and you will become one with them. The rest is up to you.

If there's anything a little negative I can say about the game, it would be about the surroundings you find yourself in. Yes, I praise them in style and what you can do with them in regards to gameplay, but after playing it for a long time, it does seem a little...barren. It's awesome that the game has a progression factor you need to work with in order to keep playing and netting high scores, but after a bit I found myself wishing there was just a little more stuff to bash around. But only a little bit. This has never decreased the addiction of the game. (some of the bonus rooms can get a bit tedious though, most especially the millipede one)

I've played this on the original TG16 console, as well as on the PSN port. I've never tried the VC version, so there isn't anything about that which I may comment on. But the PSN transition is perfect, nothing at all has changed from the original version. One of the screen adjustments kind of sucks though, as it stretches the screen out too much. It's bigger, but quite ugly.

It's also interesting to note that the PSN version allows you to save the game at any time and continue later. A game could last for hours, so this is a very welcomed feature. It also saves your scores permanently now, provided you save before turning the game off. Also awesome.

With this said, I give this old classic a perfect score. It's simple, original, and time has not touched it. It might have made good use of a little extra work in the contents area as I mentioned, but that's not enough to ruin the fun experience that is Alien Crush. A great game for old school fans, pinball fans, (although if you want random and hyper, this might not be exactly what you're looking for) or messed up monsters and dark theme fans. And just about everyone, really. My older sister, the most unassuming video game person ever, is still the undisputed Crush champion in my family. I'm number two. For nearly 15 years I've been trying to beat her score. XD This game is just that fun.

If you enjoyed this Alien Crush review, you're encouraged to discuss it with the author and with other members of the site's community. If you don't already have an HonestGamers account, you can sign up for one in a snap. Thank you for reading!

© 1998-2021 HonestGamers
None of the material contained within this site may be reproduced in any conceivable fashion without permission from the author(s) of said material. This site is not sponsored or endorsed by Nintendo, Sega, Sony, Microsoft, or any other such party. Alien Crush is a registered trademark of its copyright holder. This site makes no claim to Alien Crush, its characters, screenshots, artwork, music, or any intellectual property contained within. Opinions expressed on this site do not necessarily represent the opinion of site staff or sponsors. Staff and freelance reviews are typically written based on time spent with a retail review copy or review key for the game that is provided by its publisher.