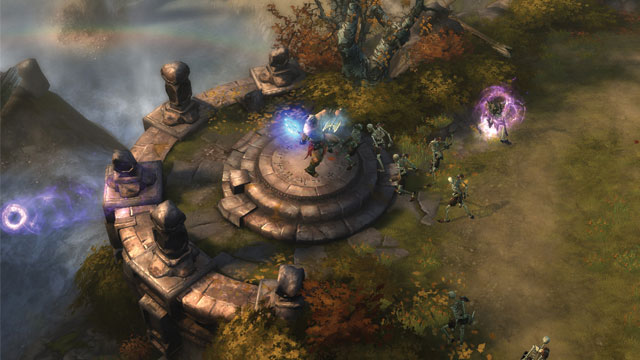 The above description is neither praise nor criticism. It simply underlines (a) why I enjoy a dungeon crawler every now and then, and (b) why I don't play them very often. Everyone hated Dungeon Siege III last year, yet I had a great time with it purely because I'd just finished playing L.A. Noire, and it was the anti-that game. After a couple dozen hours of hollow story overload with zero payoff, it was a relief to just sit back and fight some monsters. But then, shortly afterward, I couldn't engage myself with the more beloved and admittedly much better Bastion, because my dungeon crawling quota had been filled for the time being, my capacity for navigating mazes and cutting through waves of identical baddies being strained.

So while Diablo III's core gameplay is certainly pretty fun, it's nothing we haven't seen a thousand times already, and this is coming from a guy who doesn't even play many dungeon crawlers to begin with. In fact, if one of the big draws of the Diablo series is randomization, I'm left wondering why we even needed a sequel in the first place, especially if no large-scale mechanical changes are made. Call it a visual upgrade, but Diablo III doesn't even look particularly good. Those who frequent this site's forums will be aware that I just dumped a lot of money into a relatively powerful new computer, and now the first current game I bought for it looks like it could have run on my GameCube. Diablo III is also a continuation of a story, I guess, but it's a story that no one cares about.

My point is that while Diablo III is fun, it's not worth the hype or the hassle, and my goodness is it ever a hassle. I am talking, of course, about Diablo III's requirement that players must be actively signed in to Battle.net in order to enjoy the game. Blizzard has been dressing this up as an effort to idealize their admittedly strong online community. This, of course, is bogus. It's an anti-piracy measure, plain and simple. If you're a gamer, then I'll assume that you're familiar with "always on" DRM schemes and their many inherent flaws; Diablo III is, unfortunately, far from the first time we've encountered this. But while it's become an increasing concern over the last couple of years, I don't think it's ever been a problem on quite this scale before.

Blizzard has built Diablo III on what they call a "client/server architecture," meaning that Battle.net handles a number of key tasks  enemy spawns, loot drops, level layouts, etc.  that would normally be relegated to the game itself. So while the disc you purchase contains all of the game's art, animations, sound effects, dialog and so forth, it lacks the means to do anything with them. It's an incomplete product. It is, effectively, a car without an engine.

Now, it is not my job to review business practices. When I play something, I shut off, put my disgust for corporate greed aside, and judge the game on its own merits. Diablo III marks the first time I am unable to do that. In any other case of "always on" DRM, all of the content is on the disc, and it's simply locked until you've signed in to the publisher's servers. That means you're screwed if the servers go down, as has happened, but as long as the company detects your presence online, the game is open to you. If you're on, you're in. But with so many of Diablo III's core functions being handled on Blizzard's end, the game's performance is directly tied to how well their servers are running. When you buy Diablo III, half of the game is still in another part of the country, and millions of people are trying to access it all at once.

What does this mean for playability? Well, have you ever been in an online match alongside a player with a laggy internet connection, and his character is just skipping and stuttering all over the place, seemingly in another plane of existence? That's what Diablo III's entire world often feels like, with actions and dialog not triggering until long after they're supposed to. It's frequently an annoyance and occasionally outright breaks the game, with enemies not responding to you and giant, gaping holes appearing in the scenery where the level is having trouble auto-generating. I frequently had to Alt + Tab out of the game and check to make sure my internet connection was okay before finally physically moving my PC into another room and hooking it up directly to my wireless router. My problems were no less consistent.

We're happy to lambast games for having built-in technical problems like crashes and framerate issues that render gameplay a chore on a regular basis. How are the problems many people are encountering with Diablo III any more forgiveable? In a way, this is even worse. Incompetence is one thing. Deliberately handicapping your game is something else entirely. Blizzard evidently uses the same system for World of Warcraft (which I've never played, for the same reason I've never smoked a cigarette), and having the developer rigidly monitor the experience makes a certain degree of sense for a multiplayer-only game in which players need to be logged in anyway. But Diablo is a single-player franchise with a multiplayer option. A strong multiplayer option, and one that is the selling point for many people, but an option nonetheless. That a single-player campaign should require an internet connection is, in and of itself, Draconian. That said single-player campaign should be frequently hamstrung by issues previously exclusive to multiplayer games for no good reason is nothing short of ludicrous.

No, it's not nearly as bad now as it was on launch day, and the situation will likely improve as traffic dies down and Blizzard gets their act together. But that disastrous first week exposed the critical flaw that Diablo III is never guaranteed to be playable. It is only ever as functional as Blizzard allows it to be.

Funny. It was just a month or two ago that I was waving my games-are-art flag at angry Mass Effect fans over what they were "owed" as paying customers, and now here I am, knocking Diablo III for being an unstable product. As it happens, the only thing I feel we're owed when we buy video games is that they work properly. So even if we can put aside the scary fact that Diablo III's success may open doors to a future in which paying full price for a game does not mean that we own it, the truth of the matter is that if you were to ask me how good Diablo III is, I'd say I don't know. Maybe I'll boot it up and everything will be running perfectly, as it often does, in which case it's a reasonably fun (if predictable) nostalgia trip. Or maybe it'll be a server-side mess, as it all too frequently tends to be, in which case it's unplayable. Diablo III is the rare instance of a game's structural quality being beside the point. It's a volatile game, and I don't know why you'd want to invest in that. I wish I hadn't.

© 1998 - 2022 HonestGamers
None of the material contained within this site may be reproduced in any conceivable fashion without permission from the author(s) of said material. This site is not sponsored or endorsed by Nintendo, Sega, Sony, Microsoft, or any other such party. Diablo III is a registered trademark of its copyright holder. This site makes no claim to Diablo III, its characters, screenshots, artwork, music, or any intellectual property contained within. Opinions expressed on this site do not necessarily represent the opinion of site staff or sponsors. Staff and freelance reviews are typically written based on time spent with a retail review copy or review key for the game that is provided by its publisher.