Final Fantasy XIII may have been a commercial success, selling millions of units around the globe, but it also could also be considered one of this generations biggest disappointments. It wasnt so much that the game was bad, just that a number of fundamental concepts which make Final Fantasy games so enjoyable were stripped away. Sure, there were great presentation values and hours of beautifully rendered cinematics, but the adventure was incredibly linear and a number of plot twists split up the main cast so that party members often traveled in groups of only two characters at a time until around 40 hours into the adventure. With that being the case, I still really enjoyed the main story. The characters were interesting and evolved nicely as the plot progressed. Now, less than two years later, Square-Enix has released a sequel that addresses most of the complaints fans had about the first game. Will the new release do enough things right to win over the hearts of already shattered fans?

While Final Fantasy XIII focused mostly on the story and characters, Final Fantasy XIII-2 provides players with the freedom and ability to get lost in an in-depth world. The two games both refuse to settle on middle ground. The story in XIII-2 is too vague and theres very little explanation. Very little is known about the two protagonists, Serah and Noel, other than that they share motives; both of them want to save the future while finding Lightning, Serahs missing sister. Even the primary story missions that attempt to further that plot dont provide much detail. Mostly, events amount to finding a monster that is causing a paradox, killing it, altering the course of time and traveling to another timeline to repeat it all. Just when the story starts to get interesting and things began to unravel, it ends. You dont get to know any of the characters and you dont come to really care about their motives to move forward. 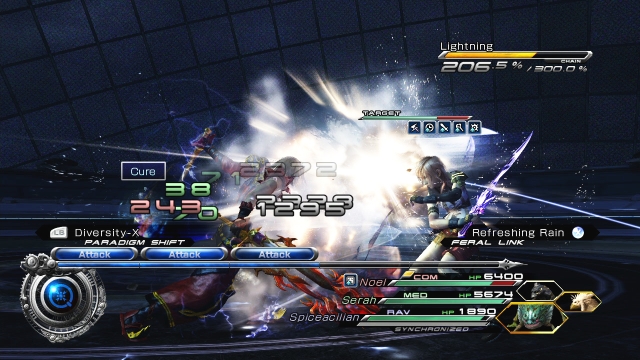 While the story and cast of party members is lacking, the gameplay and the amount of available content are overwhelming. The open world aspect that Square-Enix offers is actually quite daunting. Thats not because dungeons or cities feel overwhelming. Rather, the number of alternate timelines and years that can be accessed is to blame. When you perform an action in one time, the past and future are altered for better or worse. Disappointingly, its not really possible to actually modify those times to suit your will. While the past and future do change, it doesnt feel like you, the player, have a hand in that. Youre just watching Serah and Noel take care of things and it all feels set in stone; theres no hopping back and forth through two different time periods to witness the small changes that your actions produced. With that said, each setting that you traverse can prove quite emotional. While I couldnt force myself to care about the story itself, the plot explores numerous dark themes related to time travel; death and sorrow seem to be the most prevalent. Very rarely will you encounter what you might describe as a happy and peaceful time. There were times when I felt almost ill as I saw what the world had become.

The combat is still as entertaining as ever, thanks to the return of the fast-paced paradigm shift ATB system introduced in Final Fantasy XIII. Here it is altered a bit because there are only two lead characters under your control at any given time, but otherwise its essentially the same. Probably the largest new addition to Final Fantasy XIII-2 is the ability to capture your very own monsters, level them up and give them adorable little accessories. No one would ever mess with a Behemoth who has a cute blue bow on his head. This proves to be a surprisingly addictive system, as there are more than 150 different creatures to obtain. Each one has its own unique abilities, which can then be transferred to other monsters by fusing them. Theres something about having a gold chocobo fighting alongside you that is just appealing.

The new system is pretty simple. There are three available slots for monsters and you can summon from those slots as needed, based on the paradigm that you assign to your party outside of battle. Enemy encounters are now initiated differently. Enemies wont exactly roam the fields the way they did in Final Fantasy XIII; things are a little more random, with monsters appearing out of nowhere and leaving you with a couple of seconds to press a button so that you can strike first and possibly gain the upper hand in the form of a party that is engulfed in Haste magic. 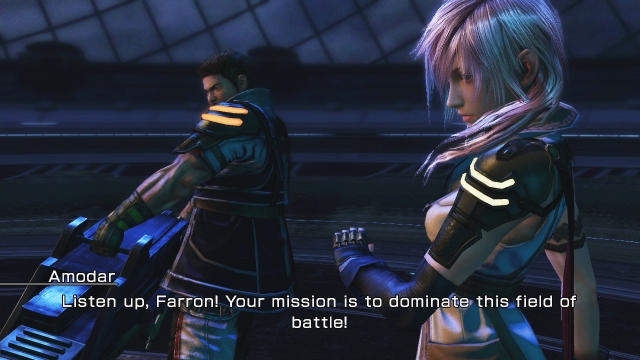 While the primary storyline may take most people between thirty and forty hours to clear, there are a handful of activities and quests to accomplish along the way that will extend play time significantly. These include situations where you can seek out random NPCs in the world and take care of some mundane task, such as finding an item or defeating an enemy. You can also spend time finding wild artifacts to open portals to different times, or seeking out fragments (which in turn are your main reward for completing most side quests). Fragments are a bit confusing at first, but they are by far the most significant of the searches mainly because they help open additional side quests that ultimately determine which of ten different possible endings you see upon completing the game. You can also have your hand in chocobo betting and playing the slots at a casino, but such pursuits arent an especially enjoyable use of your time.

Its disappointing that the storyline wasnt properly paced, and the lack of heroes and heroines limit the ability to modify the battle party, but Final Fantasy XIII-2 features the same well-crafted battle system as before and the open world traversal provides an astonishing amount of depth to the universe. The time travel aspect also creates a strong mystery that will keep you watching to see how the actions that Serah and Noel perform in one time period can alter the past and future. In the best way possible, the game feels like Chrono Trigger and Pokemon had a love child. Its just a shame that things end just as they are becoming truly interesting.

If you enjoyed this Final Fantasy XIII-2 review, you're encouraged to discuss it with the author and with other members of the site's community. If you don't already have an HonestGamers account, you can sign up for one in a snap. Thank you for reading!

© 1998-2021 HonestGamers
None of the material contained within this site may be reproduced in any conceivable fashion without permission from the author(s) of said material. This site is not sponsored or endorsed by Nintendo, Sega, Sony, Microsoft, or any other such party. Final Fantasy XIII-2 is a registered trademark of its copyright holder. This site makes no claim to Final Fantasy XIII-2, its characters, screenshots, artwork, music, or any intellectual property contained within. Opinions expressed on this site do not necessarily represent the opinion of site staff or sponsors. Staff and freelance reviews are typically written based on time spent with a retail review copy or review key for the game that is provided by its publisher.