As a shooter, Uncharted 3 is solid, if not mostly the same as it's ever been. I can do without the fisticuff QTEs, which play like a bargain bin version of the fighting from Batman: Arkham City. It's especially silly how you have to keep fighting the same big guy over and over, as if Uncharted 3 needs to keep saying, "Hey, remember how cool this bit was in Raider of the Lost Ark?" Uncharted 3 says that a lot. But the gunplay is good, and it provides a solid foundation for the mostly typical multiplayer support. You get lots of options for leveling up, customizing your characters, and playing various types of cooperative and competitive games. There's even a competitive/cooperative mode in which two teams of two players take turns playing the heroes and playing special thugs amid all the AI thugs.

But as an overall package, Uncharted 3 is mostly filler without gameplay. It's the modern equivalent of those full motion video games folks made back in the 90s when new CD-ROMs afforded all that storage space. So developers shot video footage, grafted it onto various games (usually puzzle collections), and a genre was born. Who cares whether there was an actual game in there? We were watching actual real video featuring celebrities like Mark Hamill, Dennis Hopper, Rob Schneider, and whoever the chick was in that Phantasmagoria game! She was famous, wasn't she? I forget. 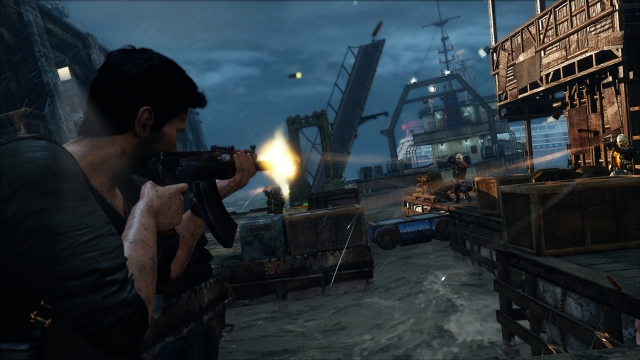 So as Uncharted 3 dutifully goes through the paces from cinematic set piece to cinematic set piece, featuring elaborately motion-captured and ably voice-acted characters in canned feats of derring-do straight out of Raiders of the Lost Ark, it's starting to occur to me that I'm just killing time on the way to the serviceable shooter bits. Why don't I just cut to the chase and play a better shooter without all the breaks for something that clearly wishes it was a movie? Why is my decent third-person shooter so bogged down by an overlong, ill-fitting, poorly told, and ultimately uninteresting story?

When the backlash happened against FMV games, it was because players realized they weren't doing anything, so they might as well watch sitcoms and whatnot. Uncharted 3 doesn't quite make that same mistake. You have to participate by holding the analog stick up to move Drake forward. You are almost literally pushing him, as surely as you push a truck in one of Uncharted 3's many non-puzzling puzzles. Push him through stretches of exposition, through flashbacks, through hallucinations, through wilderness, through crevices, up walls, along railings. In the climbing sequences, which have zero sense of exploration or uncertainty, you push Drake up a wall much as you might push a child up a jungle gym to help him feel a sense of accomplishment.

There are perhaps three sequences where the climbing also involves shooting, with the camera swinging down below Drake to look up at enemies shooting down at him. It's exactly like Dark Void, which you didn't play because it wasn't the third in a popular series. But the occasional gunfight isn't enough to breathe life into all that climbing and jumping along a set path with no sense of danger and no deviation. As the camera helpfully lines up the next designated jump, Drake quips, "I've only got one shot at this". Actually, no. Saying so doesn't somehow make this dramatic. You have as many shots at this as this takes. One of the levels, which you can freely replay, is called "One Shot at This". 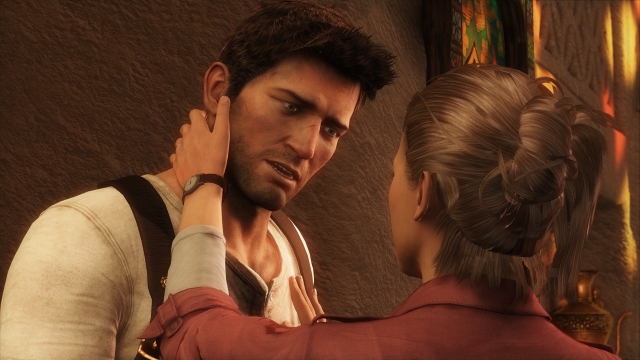 Uncharted took the Tomb Raider formula and improved on it with meaningful characters, latest-gen graphics, and hearty gunplay. But why does it keep Tomb Raider's acrobatics when it treats them as such a pointless formality? In Tomb Raider, you jumped and climbed as a way of exploring the world and solving puzzles. Lara Croft's moves were how you interacted with elaborate mechanisms. All that is gone in Uncharted 3. Now you push Drake along rails to reach a point where you press the triangle button that pulls a switch that opens the door to either a canned action sequence, more climbing, or a cover-based shooter. It's all busy work, and it's all so rote. A chandelier in a French chateau is no different from a chandelier in a cruise ship, which is no different from a chandelier in an ancient Arabic city. And ultimately, they're no different than a rusty rail on a wrecked ship.

Furthermore, this latest Uncharted takes a weird democratic approach to the acrobatic shenanigans. The bad guys always made their way to unlikely places so Drake would have someone to fight. But now Drake's entourage tags along in a veritable Parkour parade up and down crumbling walls, over chasms, and along all those highlighted yellow railings. Even Sully, who's got to be pushing 60, performs Prince-of-Persia-worthy feats simply because Uncharted is so accustomed to shunting you along its clearly labeled routes that it figures, heck, anyone can do it, so why not have Drake's friends along for the fun? In the original Uncharted, Drake had to find a way to around a door or up to a high point to check a clue while Elena waited. Not because she was a girl, but because he was the hero. Now she just goes wherever he goes, upper body strength be damned. It's like when R2-D2 grew jets for the more recent Star Wars movies. Why didn't he use those in the original movies?

Even the gunplay fits poorly with the story and characters. Drake and Sully shoot their way through a courtyard occupied by twenty soldiers armed with rocket launchers and riot shields and shotguns and destructible bits of body armor. Then they get to a cutscene in which a couple of dudes in casual attire get the drop on them using pistols. Look, Uncharted, you have established a world in which Drake can easily shrug off bullets and gun down dozens of men with nary a saved game being reloaded. If that's the world you want to build, don't tell me a story that ignores that world. Because that's what those FMV games used to do. You should be better than that. You built yourself on characters that matter. What happened? 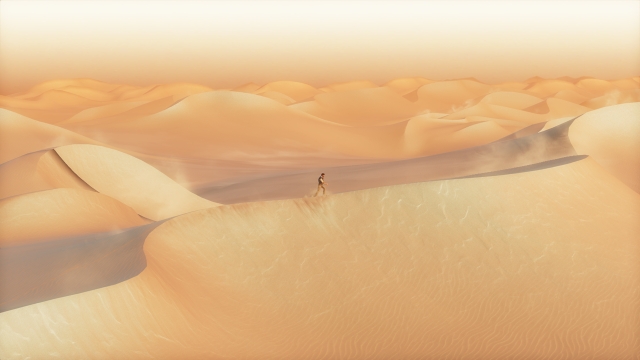 But it all comes down to how the story and the characters no longer fit the gameplay. Elena accompanies Nate through a series of gun battles, gunning down henchmen by the dozens with the practiced aplomb of a trained soldier or an inveterate videogamer. At the transition point to the next level, Drake decides to deliver a supposedly moving speech, accompanied by music and earnest voice acting, about how he can't risk losing her, so she has to stay behind for this next level. At which point something happens that separates them anyway, so what's the big deal?

This is a classic example of writing a story, and also designed a game, and no one considering whether they fit. It's a disservice to what was so good about Uncharted, where the characters didn't feel jammed so inelegantly into someone else's game. If Naughty Dog doesn't care enough about their characters to find them a consistent place in the world and to establish the stakes, then why should I care?

The characters are still charming, if not underwritten. Most of the dialogue is either turgid exposition or jokey bits that wouldn't be out of place in a mid-season replacement on network TV. "That's what she said" must be pretty popular around the Naughty Dog offices. There isn't a single meaningful reveal or development, although I admit that I was entirely confused about some business with wedding rings. Did I miss Uncharted 2.5? The connection between Nate and Elena that gave the first game so much heart sits in the background again, although at least Uncharted 3 has the sense to kick Chloe to the curb at about the half-way point. This Uncharted intends to explore the relationship between Drake and Sully, which doesn't really need exploring. We know that Sully is gruff, weary, deeply loyal to Drake, and a father figure. Treating these things as reveals doesn't give the story weight. It's like listening to a joke when you already know the punchline. 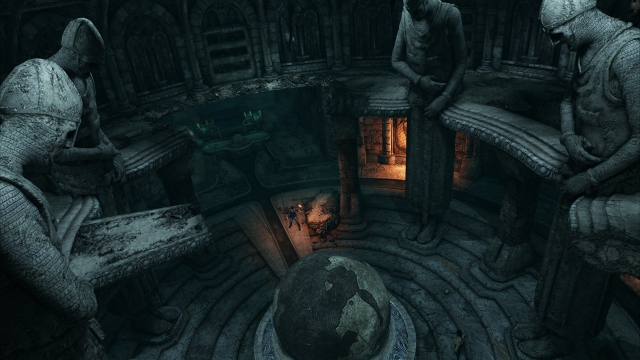 The plot this time around makes even less sense than Uncharted 2's tree resin that lets you take more damage. The bad guys are chasing a mysterious doo-dad that will apparently let them do something a) that they're already doing, and b) that pretty much anyone with a chemistry set can do. It's a pretty lousy villain who goes chasing a relic to the far ends of the earth when she could have just whipped up a little something in her garage. But it's a pretty lousy villain anyway. Actually, a pair of them. One is underdeveloped considering how she's supposed to fit into the action, and the other is laughably generic, right down to the looping QTE that serves as the final boss fight. He is dispatched with a line from Brian DePalma's The Untouchables. The locations are mostly as forgettable as the new characters. There's a reason few games take place in the open desert.

However, Uncharted 3 includes an exception to almost everything I've written here. For four chapters out of 22, this game absolutely comes alive. Drake briefly heads out to sea for a side adventure, against a whole new villain, in a whole new setting. This stretch of action is easily among the best that Uncharted has ever been. The levels progress in a consistent and fascinating way, steadily ramping up the action and raising the stakes. The villain has a fantastic finale, and even the climbing bits are exciting for how they work their way through the shifting levels. If the rest of the game had the same creative energy as chapters 12 through 15, Uncharted 3 would be a worthy spectacle even if it didn't care about its characters. But we demand at least ten hours from our single-player experiences, even when a developer can't come up with ten hours that don't feel like filler. So instead of being a tightly contained package about an adventure at sea, Uncharted 3 is a drawn-out slog through a barren gameplay desert peppered with bits of decent shooting.

If you enjoyed this Uncharted 3: Drake's Deception review, you're encouraged to discuss it with the author and with other members of the site's community. If you don't already have an HonestGamers account, you can sign up for one in a snap. Thank you for reading!

© 1998 - 2022 HonestGamers
None of the material contained within this site may be reproduced in any conceivable fashion without permission from the author(s) of said material. This site is not sponsored or endorsed by Nintendo, Sega, Sony, Microsoft, or any other such party. Uncharted 3: Drake's Deception is a registered trademark of its copyright holder. This site makes no claim to Uncharted 3: Drake's Deception, its characters, screenshots, artwork, music, or any intellectual property contained within. Opinions expressed on this site do not necessarily represent the opinion of site staff or sponsors. Staff and freelance reviews are typically written based on time spent with a retail review copy or review key for the game that is provided by its publisher.