Ladies and gentlemen, the bar has been set. If you play games, you should be playing this. If you review games with scores on your reviews, this should set the high end of your rating scale. If you make games, your first order of business should be to play Batman: Arkham City and your ongoing order of business should be to constantly ask yourself how Arkham City did it and to then do it that way in your game. 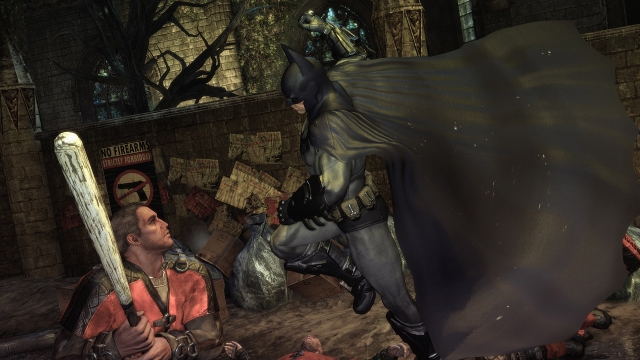 I know what you're thinking, especially if you didn't play Arkham Asylum. "A superhero game? A Batman game?" Batman is a bit schizo, and I don't mean all that brooding stuff. This detective from the 1940s has since ping-ponged freely between cheeseball schlock from Adam West or Joel Schumacher, and earnestly edgy angstman anti-hero from Frank Miller or Tim Burton. But he is also the source material for two works that spectacularly transcend (or realize?) their comic book roots. Christopher Nolan's Dark Knight and Rocksteay's Arkham City are both more than just good entertainment that happen to be based on comic books. They're inspired and inspiring creative endeavors at the absolute top of their form, taking what should have been baggage  A blind squeaking cave bird/rodent as the power animal? A bad guy who dresses up as a clown? A rich dude with a butler fighting crime by night? The sort of car some guy would drive to compensate for a small penis? -- and adroitly adapting it to cinematic or gameplay argot. Is there something special about Batman? Or are Nolan and Rocksteady just geniuses who happen to have the rights to a comic book dude?

I shouldn't be so dismissive, of course, but all this is to establish that Arkham City didn't win me over because I'm a Batman fan. On the contrary. I don't do comic books. Sniff. But, sure enough, there I was reading the Wikipedia entry for Solomon Grundy after meeting him in the game. There I was hunting for collectibles because I wanted to read a chunk of backstory. In this case, the only chapter I hadn't collected that details how Catwoman came to Arkham City. This is a game so good, so well made, so infused with reverence for the subject matter that I actually care about the subject matter. How else can you explain that Catwoman and even Robin aren't ridiculous? 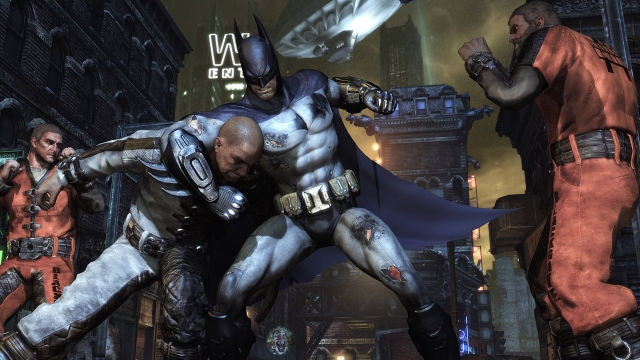 There is almost nothing in Arkham City that doesn't feel perfect. How the music is dialed in to specific moments in the story. How the writers and designers drew from a deep well of lore. How the world is intimate and detailed, yet richly varied, and holding some truly wonderful secrets in surprising places. How I can set the pace, with a faux sense of urgency waiting in the background whenever I'm ready. How the RPG system doesn't make me fight level one rats with a dagger, but it also doesn't feel inconsequential. How many wonderful toys litter this combat sandbox! So many gadgets, so deeply integrated into combat and exploration. The voice actors. The animation. The fighting system. The lighting, even if it is always nighttime. The amount of content. Good lord, the amount of content! The Riddler's challenges were a nifty bonus in Arkham Asylum. Here, they are arguably the heart of the game, beating strong and steady, pumping this world full of gameplay, long after all the other archvillains are in jail. 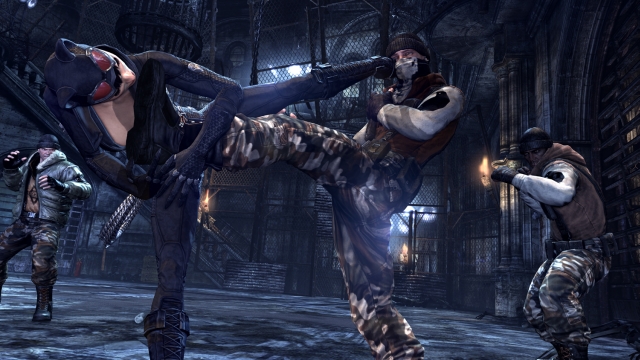 The learning curve, simultaneously gentle and demanding. The unlockables. The way Batman's suit dirties and his cape rips. The dalliances with madness and poison. The story, which deftly details a bunch of villains double and triple crossing each other. Each villain is set up, introduced, and given his moment to shine. I feel sorry for the folks making the inevitable Batman: Gotham City. Are there any characters left for them to plumb?

The world building. Has a virtual place ever been such a canny combination of story backdrop, richly atmospheric graphics, and thrilling playground as this walled off section of Gotham City converted into a prison? Arkham City is densely packed with things to see, things to hear, and things to do. Gliding over the rooftops can be as rewarding as strolling along the streets. Rocksteady's city is a spectacle through and through, even more beautiful than Ubisoft's Assassin's Creeds for how it's so true to its fanciful Gothic tone. Renaissance Italy is the stuff of history and paintings; this Arkham City is the stuff of fantasies and nightmares. Even something simple like an underground secret door is turned into a minor drama for how it's unlocked. It's not enough that Batman just turns a key. It's not enough that Batman puts a waypoint on the map. It's not enough that a helicopter buzzes around overhead. It's not enough that thugs have little conversations. It's not enough that there are surveillance cameras. Everything in this place goes to such careful and ambitious lengths, marrying gameplay, setting, and spectacle in one of the grandest videogames yet made.

© 1998 - 2022 HonestGamers
None of the material contained within this site may be reproduced in any conceivable fashion without permission from the author(s) of said material. This site is not sponsored or endorsed by Nintendo, Sega, Sony, Microsoft, or any other such party. Batman: Arkham City is a registered trademark of its copyright holder. This site makes no claim to Batman: Arkham City, its characters, screenshots, artwork, music, or any intellectual property contained within. Opinions expressed on this site do not necessarily represent the opinion of site staff or sponsors. Staff and freelance reviews are typically written based on time spent with a retail review copy or review key for the game that is provided by its publisher.