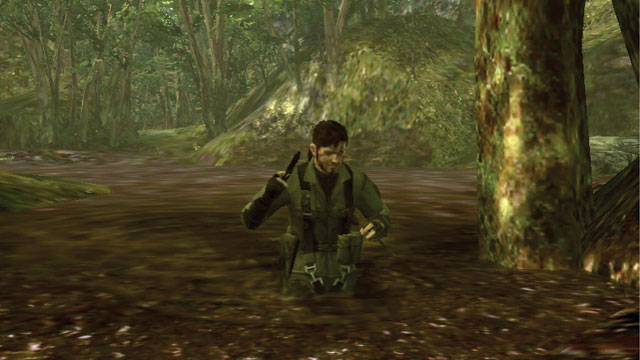 Nintendo today confirmed a Metal Gear Solid: Snake Eater 3D demo would slither its way to the 3DS' eShop this week. It sounds like a good time to see if the game is worth yet another purchase, after the initial PlayStation 2 version got a re-release only a year after launching (Subsistence) and the more recent Metal Gear Solid HD Collection included the game as well.

Of course, none of those versions could be played on handheld, Nintendo device (in 3D, no less), so, well, there's that. You already know about the circle pad pro compatibility and that gorgeous, limited edition, snakeskin 3DS, so, I guess there's nothing else to see here. One interesting thing to be on the lookout for, though: Will this Snake Eater 3D demo "feature" limited playthroughs, just like the Resident Evil: Revelations demo? We'll see.

If you enjoyed this Metal Gear Solid: Snake Eater 3D article, you're encouraged to discuss it with the author and with other members of the site's community. If you don't already have an HonestGamers account, you can sign up for one in a snap. Thank you for reading!

© 1998-2020 HonestGamers
None of the material contained within this site may be reproduced in any conceivable fashion without permission from the author(s) of said material. This site is not sponsored or endorsed by Nintendo, Sega, Sony, Microsoft, or any other such party. Metal Gear Solid: Snake Eater 3D is a registered trademark of its copyright holder. This site makes no claim to Metal Gear Solid: Snake Eater 3D, its characters, screenshots, artwork, music, or any intellectual property contained within. Opinions expressed on this site do not necessarily represent the opinion of site staff or sponsors. Staff and freelance reviews are typically written based on time spent with a retail review copy or review key for the game that is provided by its publisher.